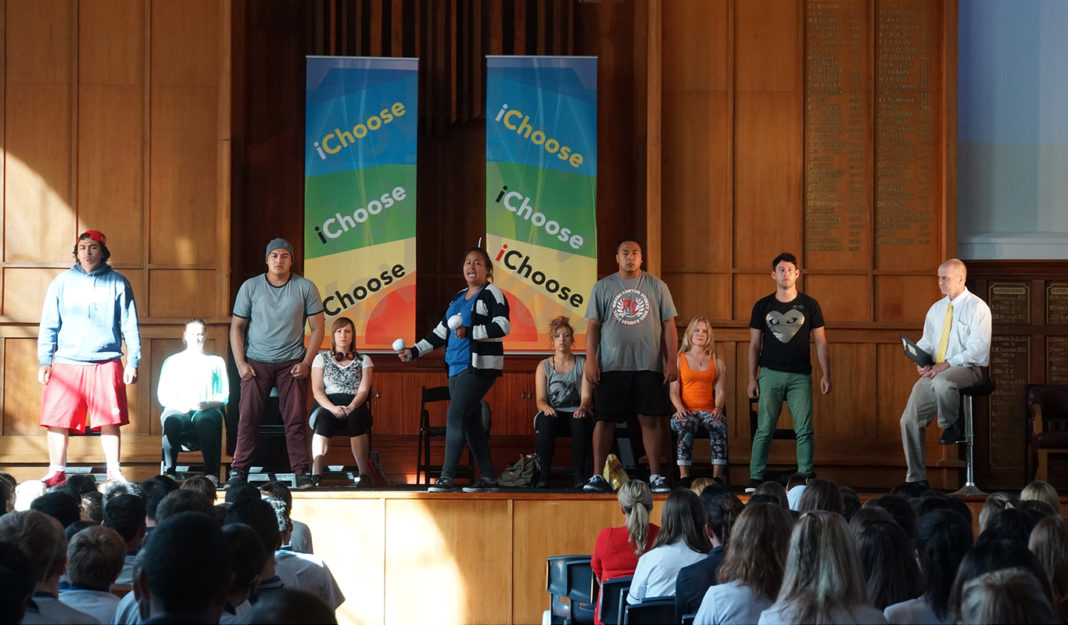 iChoose, ICAP’s innovative youth-empowerment mini-musical made an encore appearance via video, with showings at Prosser Career Academy. Prosser, located on Chicago’s west side, presented the two iChoose showings during school’s “Peace and Unity Week.” The annual event has become a start-of-the-school-year tradition established by students and faculty in order to set the tone for and to assert a culture of peace at Prosser, and in the surrounding community.

Each year, the school invites community leaders, as well as performing artists and local activists, to play a big part in the Peace and Unity Week celebration, and to inspire students to put into practice one of Prosser’s mottos: “Extend the World.”

The video of an iChoose program originally presented in New York City, which focuses on the power of choice, was shown to an assembly of some 500 students immediately following a rousing speech by Illinois State Senator William “Willie” Delgado. Sen. Delgado, who is of Puerto Rican decent, addressed the students in both English and Spanish, passionately shared his life’s experience. The senator, a son of immigrants, told of overcoming the lure of the streets to become a person who would fight for and protect ordinary people in the state’s highest lawmaking body. The key, he said, was making good choices and encountering good influences.

The iChoose video was viewed by Prosser’s freshman class who, afterward, heard from a seven-person panel of their peers. The panelists — Gabriel Portillo, Luis Marquez, Carmen Pedraza, Lisette Rios, LaMaiya William, Madeline Castellanos, and Ulises Delgado — represented all four grade levels, from freshman through senior. Prior to the assembly, the panel members gathered with ICAP member and virtuoso guitarist Marcus Dunleavy to preview the performance, and to review an essay by Daisaku Ikeda, called “Our Power for Peace.” In a section of the essay titled “The Power of Dialogue,” Mr. Ikeda encourages:

“True and lasting peace will only be realized by forging life-to-life bonds of trust and friendship among the world’s people. Human solidarity is built by opening our hearts to each other. This is the power of dialogue.”

Mr. Dunleavy assured the panelists that the simple, courageous act of sharing their individual stories of how they overcame bullying or helped friends to do so is in itself exercising the power of dialogue. The students reflected on how raising their voices in this way would help open hearts and forge life-to-life bonds of trust and friendship at their school.

The panelists each shared a deeply personal story with the audience. One freshman recalled how she reached out to prevent a friend from committing suicide. The friend, who had become depressed and isolated — even from her own family — as a result of being bullied, ultimately chose a different path as a result of the caring student’s deep and heartfelt listening.

A senior told the story of how he was continually bullied in elementary school. In junior high, as a protective measure, he decided to reinvent himself. He reflected on how he projected an image that was contrary to how he really felt inside. In an attempt to “go with the flow,” he joined some other students in bullying a student who had a learning disability resulting from a head injury.