Amid global political tensions that include the island of Guam’s identification as a target of a missile strike by a foreign state, the Guam Municipality of Tamuning-Tumon-Harmon (“Ta-Tu-Ha”) courageously continued its tradition of promoting peace, friendship, diversity, and cultural exchange – not only for the citizens and visitors of Guam, but for the entire world by hosting its Sixth Annual Latte Peace Festival at the Tamuning Mayor’s Office Park on January 20-21.

The annual festival is hosted by the Tamuning-Tumon-Harmon mayor’s office. This year, co-sponsors included such community partners as the SGI-USA, the International Committee of Artists for Peace, the Mayors’ Council of Guam and the Guam Visitors Bureau.

“Latte” is the name that the Chomorro (persons indigenous to the  Mariana Islands) use for the carved limestone pillar that was used, historically, as a key element in ancient building-support as well for  the creation of monoliths to honor their ancient ancestors.

During the opening ceremony Mayors’ Council of Guam (MCOG) Executive Director Mr. Angel R. Sablan welcomed attendees to the festival later pointing out that the festival is held beside the busiest intersection on Guam where, in addition to the participants in the park, thousands of individuals saw the festival in progress on a 12’ x 12’ video display that faced the street focusing on all of the performances onstage.

The ceremony included the posting of colors by the John F. Kennedy High School Air Force Junior Reserve Officer’s Training Corps (ROTC) and the singing both of the United States of America National Anthem and the Guam Hymn by Ms. Fantaysha Rioja.  Mr. Sablan introduced Mayor Louise C. Rivera (the mayor of Guam’s  Tamuning, Tumon, and Harmon municipality and Festival host) calling her his “Symbol of Peace”.

Mayor Rivera warmly expressed her thanks to the Festival’s sponsors including Mr. Angel Sablan, Leah’s Fabulous Productions, Buddy’s Home Furnishings of Guam, Bank of Guam, American Legion, VFW, John F. Kennedy ROTC, Ms. Fantaysia Rioja, the Governor of Guam, the International Committee of Artists for Peace, the Catholic Daughters, MPC Members, the Mayor’s Office Staff and volunteers, Vendors, and Entertainers for their support of the event.

After the Mayor spoke, University of Guam Professor Dr. Ron McNinch was invited to address the attendees.  Dr. McNinch illustrated his opinion that Guam is a model of peaceful diversity by stating,

“Guam is a very interesting place.  We have more people married to people of other races and cultures virtually than almost any other location in the United States.  Our marriage rate for people of different races getting married is 42%.  If we consider people who are already of multi-ethnicities, that rate’s almost 70% – that’s one of the highest rates in the United States.  And we have a very peaceful community I think because of our value for tolerance and our value for respect and our value for each other.”

“The International Committee of Artists for Peace (or ICAP) is an organization founded by several visionary artists to create a culture of peace and develop future peacemakers through the transformative power of the arts. Since 2002, ICAP has sponsored concerts, iChoose musicals, exhibits, dialogues, and peace-building workshops to instill the ideals of humanism and nonviolence in today’s youth. And since 2013, [ICAP has] had the honor and privilege to be a co-sponsor of the annual Guam Latte Peace Festival. This event is especially important to the world because it takes place in Guam, where diversity is both represented and valued.” 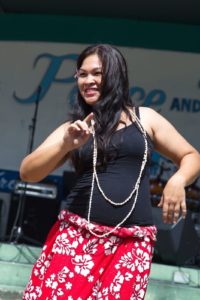 Lt. Governor Ray Tenorio, in offering his message to the audience, after listing the threats and concerns that the inhabitants of Guam currently face, simply yet poignantly stated, “Ladies and Gentlemen, peace is the one thing that every single person wants.” The Lt. Governor continued,

“Peace is not just about having a good military and a good offense to make sure the defense is there.  But also to make sure that we provide for our children.  That we create an environment where we don’t have individuals who believe in an extreme mentality so we do not have terrorism.  That too is part of peace.  And making sure that individuals get a good education.  That they have been placed on the road to prosperity, to employment, to home ownership, to be able to have good roads, good health care system, good education system.  All of these contribute to peace.  And to the extent of the government as a partner in the state quarters and the private sector and the citizens in our community to make sure that we deliver peace in every form whether it be against terrorists or oppressive governments…or other countries that want to see the democracy that we enjoy and the freedom of religion and the freedom of speech maintained.  We must be vigilant.  We must do our part.”

After the Lt. Governor’s statements, came the ceremonial “Lighting of the Lattes”.  Installed in the Tamuning-Tumon-Harmon Mayor’s park are three, large Latte stone replicas that also serve as torches.  The two outer Latte stones were already alight as the Mayor joined with Lt. Governor and a small group of participant-sponsors to bring the two outer flames together to light the center flame signifying the Festival’s purpose of unifying all in an observance of peace.

The completion of the opening ceremonies was celebrated by all with the song “Let There Be Peace on Earth” marking the beginning of two days of diverse, cultural celebrations expressed by many groups through music, dance, food, art, and conviviality.

Benjamin J.F. Cruz, Speaker of the 34th Guam Legislature, presented a resolution commending Dr. Daisaku Ikeda and his wife, Kaneko Ikeda, for serving as “inspiring examples of how one person’s committed efforts can transform the lives of millions of people around the world, including those of us here on Guam.”

(ICAP offers its heartfelt appreciation to Stewart Clayton for this article and to Carol Clayton for photographs.)