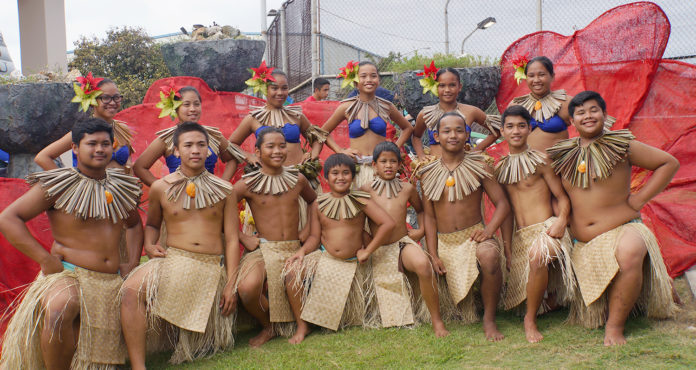 The year 2017 marks the 72nd anniversary of the end of World War II, during which the Chamorro people suffered from unspeakable atrocities committed on the beautiful island of Guam. More than 3,000 Guamanian citizens gathered Jan. 21–22 for the fifth annual Latte Peace Festival. This highly anticipated yearly event promotes peace, friendship and cultural exchange. The festival derives its name from the carved limestone latte stone, which was used as a key element in ancient building-support pillars, and in the creation of monoliths to honor ancient ancestors. The lattes were devised by the Chamorros, the indigenous people of the Mariana Islands, which includes Guam.

The annual festival is hosted by the Tamuning-Tumon-Harmon mayor’s office. It is held at Tamuning Park. This year, co-sponsors included such community partners as the SGI-USA, the International Committee of Artists for Peace, the Mayors’ Council of Guam and the Guam Visitors Bureau.

Angel Sablan, executive director of the Mayors’ Council of Guam, served as Master of Ceremonies. The festivities began with posting of colors by the John F. Kennedy High School Air Force Junior ROTC, and a native blessing of the land by Guma Huetsan Guam, followed by welcome remarks from Mayor Louise C. Rivera and Vice-Mayor Kenneth Santos. Mayor Rivera expressed her gratitude for everyone making time to “celebrate the wonderful occasion and take part in the prayer for peace and inauguration of the Municipal Planning Council.” Mayor Rivera was re-elected last November. She extended her appreciation to her hard-working staff, volunteers, sponsors, and all the other wonderful people who helped make this year’s event happen. 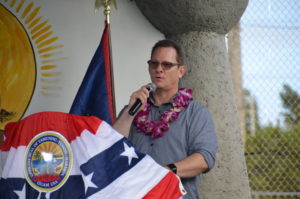 Following an introduction and the swearing in of Municipal Planning Council members, Lt. Gov. Ray Tenorio encouraged festival attendees to consider each and every action of every person that made our country great. He urged to us continue to work together, because our future is embedded in us, in what we do and whatever position we are at.

Dr. Ron McNinch, associate professor of public administration from the University of Guam, recounted the ideals of Dr. Martin Luther King Jr, saying that how we address injustice and bad behavior is what makes us peacemakers. 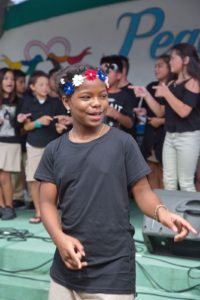 Then, Mr. Bobbie Debozi, a peace organization leader took the podium. He expressed his appreciation over having the chance to visit Guam for the first time, and to be a part of the Festival. Mr. Debozi then shared the philosophy that each person has within him or her the highest life potential, and that we would do well to celebrate the dignity of life.

New to the Festival this year was the inclusion of inspirational performances by some 300 students from Tamuning Elementary and Lyndon B. Johnson Elementary schools. At the beginning of the year, Speaker Judi Won Pat, a designer of the program met with Carolyn Diaz Camacho, the principal for Tamuning and LBJ elementary schools, and their instructional coach, Tricia Cruz. Speaker Won Pat’s vision was for each individual student to initiate a dialogue on peace, to start thinking about what peace looks like, and how to contribute to peace at home, in the classroom, in the cafeteria, on the playground, etc. 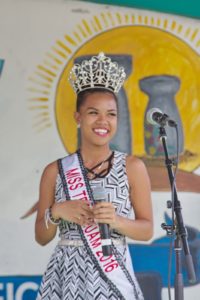 At the Festival, Tricia Cruz, who also served as an emcee for this portion, said: “We are honored to share some of the great works of our own peacemakers. Our Pre-K, Kindergarten, and first- through fifth-grade students have discussed peace and created displays that depict peace.” She then introduced several fifth-grade presenters of what turned out to be very well received (TED-style) “Peace Talks.”

Ms. Cruz went on to introduce one of the Festival sponsors, the International Committee of Artists for Peace. “This group of individuals come together to promote peace through the arts. At this time, LBJ and Tamuning (elementary schools) are going to do just that! We will have fifth-graders perform using music as a vehicle to promote peace.” Then, using coordinated hand gestures and body movement, the Fifth-Graders Choir charmed the crowd with their performance of the songs “Stand by You,” “True Colors” and “Heal the World.” 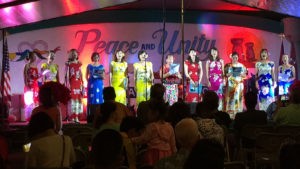 Following the lighting of the latte stones, a wreath was laid at the park’s Peace Monument, which was erected in 2010.

In an interview afterward, Tamuning-Tumon-Harmon Mayor Rivera, expressed her appreciation to volunteers, sponsors, and all the other wonderful people who helped make this year’s event happen. Mayor Rivera said, “Latte Peace Festival has given us opportunities to bring different groups, denominations, and cultures together, and, to share the joy of working in unity, getting to know each other and making sure that dialogue, rather than bullying and violence, is the solution.”