Home Uncategorized Setting out to educate kindergarteners around the world 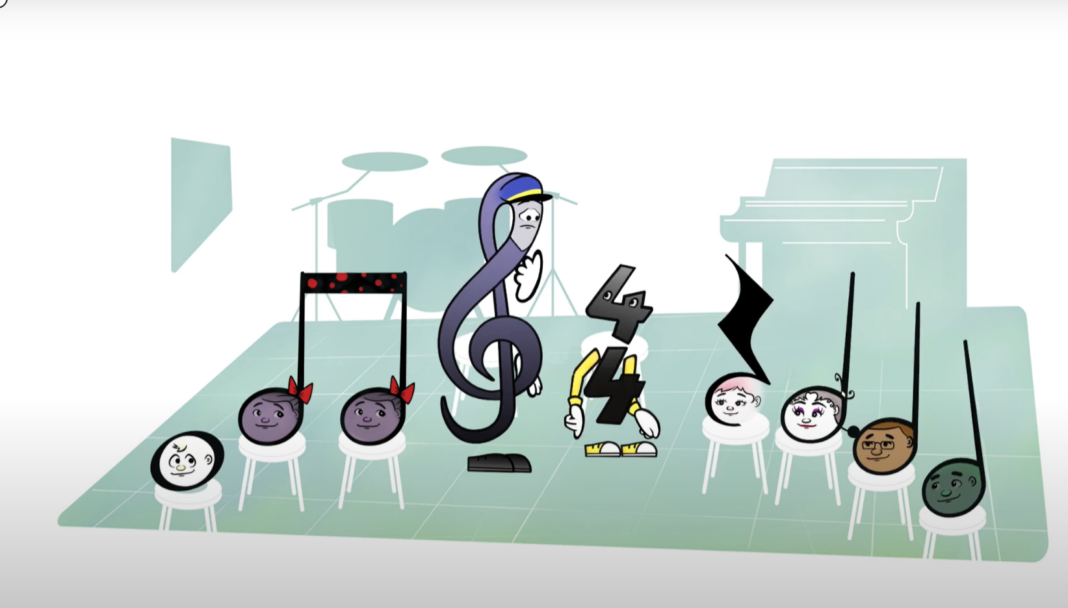 Through an inspired collaboration with 14-time GRAMMY and Academy Award-winning pianist and composer Herbie Hancock along with an award-winning team of animators from Atomic Kid Studios, the Young Academic Research Group (YAM) at the Touro Graduate School of Education in New York City has released the first in a series of animated videos showcasing innovative methods for educating kindergarteners.

Titled Treble Leads the Class, the newly released video is part of a supplemental curriculum developed by YAM that uses the power of music to help kindergarteners learn about numeracy, problem-solving and computational thinking. YAM is an early phase education and research program led by professors Susan Courey, Timothy Bellavia and Roslyn Haber and funded through a $1.4 million grant from the U.S. Department of Education in the Office of Elementary and Secondary Education.

Hancock, whose commitment to educating young musicians through his work as Chairman of the Herbie Hancock Institute of Jazz led to appointments as an adjunct professor at The UCLA Herb Alpert School of Music and UNESCO Goodwill Ambassador for Intercultural Dialogue, narrates the entire video. “I’m thrilled to be able to create new ways for children to learn about music,” said Hancock. “I hope this video and the others to come will help instill a sense of fun and musical inspiration for kids around the world.”

Treble Leads the Class tells the tale of characters Treble Clef and his best friend, Four-Four Signature. Treble, like many young children, battles nerves and anxiety when talking with others. When he’s chosen to lead his classmates during a day at school, Treble is challenged with facing those fears. Thankfully, his friend Four-Four is there to keep him calm. Much of the video’s dialogue relies on the language of music to enlighten kids about notes, rhythm and the process of making music.

(For a preview of Treble Leads the Class, click here.)

The story for Treble Leads the Class was co-written by Courey and Bellavia. “This exciting program integrates mathematics, music, and computational thinking in an engaging way for kindergarteners,” says Courey. “Young children will learn rhythm and music notation, while fun and creative activities will provide structured opportunities for students to connect math skills to music and computational thinking at an early age.”

All characters in the video are voiced by CJ Emmons, a singer/songwriter/producer who also serves as the principal singer on Dancing with the Stars (ABC television network, U.S.). The video also features original compositions from Nick Vayenas, a graduate of the Herbie Hancock Institute of Jazz Performance master’s program.

When Courey and Bellavia saw the animated version of their story and characters for the first time, Bellavia said, “I feel like I am watching the birth of my children. Amazing!”

Building on the efforts of the talented team of educators, musicians and artists, Treble Leads the Class and its characters were brought to life by animators, editors and producers at the award-winning Atomic Kid Studios animation and video production studio in Milford, Conn.

“Developing distinct personalities for each note while maintaining the integrity of each symbol was an exciting challenge,” says Stephen Barrante, co-founder, with Ben Miller, of Atomic Kid Studios. “We made very conscious decisions about how each note looks and acts, and while notes in sheet music are written in black and white, these notes have color and expression. The concept of diversity was important in their representation.”

Barrante has an especially personal connection to jazz and this project: “My father was a college professor and jazz pianist, and he exposed me at a young age to artists and legends like Herbie Hancock,” says Barrante. “Working with YAM and Mr. Hancock has been an honor and a career highlight for all of us at Atomic Kid.”

Institute Chairman (and ICAP co-president) Hancock expressed his enthusiasm, stating: “I’m thrilled to be able to create new ways for children to learn about music. I hope this video and the others to come will help instill a sense of fun and musical inspiration for kids around the world.”

In honor of the collaboration with Hancock, Treble Leads the Class premiered during this year’s International Jazz Day.