One-hundred-and-five-year-old educator, Dr. Saburo Shochi, set forth on his sixth round-the-world lecture tour in November 2011. This landmark tour brought him to Boston, where, on Nov. 19, he attended the 64th Annual Scientific Meeting of the Gerontological Society of America. 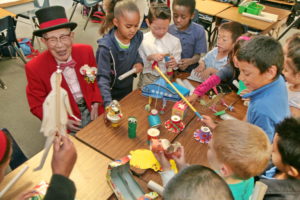 Dr. Shochi was introduced to the participants by the society president, Donald Igram, and by a keynote speaker, New York Times best-selling author Dan Buettner, whose book The Blue Zones examines communities around the world with the highest life expectancy, as a great example of a person who embodies the traits necessary for a long, well-lived life.

Boston was just one stop on this latest global adventure, during Dr. Shochi was to lecture in five countries on early education for children, as well as share the secrets of his longevity. Among the centenarians many accomplishments, he is an expert at creating educational toys out of recycled materials, and frequently his lectures include a demonstration of these items.

According to Dr. Craig Wilcox, professor of International Health and Gerontology at Okinawa International University, we have a lot to learn about healthy aging from Dr. Shochi, such valuable ideas as having a sense of purpose in life, remaining active, engaging socially, and maintaining a positive outlook. 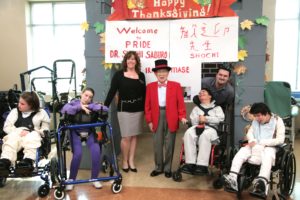 At the GSA symposium in Boston, Dr. Shochi recounted how his first two children, who were both born with cerebral palsy, were constantly bullied at school. One child was so mistreated that he was pushed down a school stairwell. Soon after, his children were relegated to staying at home, watching sadly out the window as the other kids went to school each day. As a result, Dr. Shochi took it upon himself to establish a school for developmentally challenged children. In 1954, he sold his family property and opened the Shiinomi School in Fukuoka, Japan.

From Boston, Dr. Shochi then made his way to Las Vegas, where, on Nov. 21, he spoke with and encouraged students at Opportunity Village, an educational/vocational institution for autistic children founded in 1954, the same year Dr. Shochi’s Shiinomi School opened. 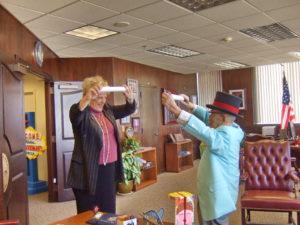 He also paid a courtesy visit on Nov. 22 to Las Vegas Mayor Caroline Goodman’s office, where he again demonstrated making toys out of recycled material and invited her to join him in a baton exercise, one important aspect of Dr. Shochi’s daily regiment of activities for maintaining vitality.

Before departing Las Vegas for the next leg of his tour, he spoke to first-grade students at the John S. Park Edison elementary school on Nov. 23.

Dr. Shochi shows no signs of slowing down. Already plans are in place for his next global lecture tour, slated for 2012.