Iconic Hollywood Bowl welcomed a rousing paean to peace on August 29 when Los Angeles Philharmonic’s Creative Chair for Jazz, Herbie Hancock, brought together some of the world’s premiere musicians for a concert called “Celebrating Peace.”

Amid the fragrant late-summer jacaranda balm, Mr. Hancock performed both under the stars and surrounded by them. His stellar all-star line-up, assembled just for the evening, included fellow ICAP co-president and saxophone master, Wayne Shorter, and guitar virtuoso Carlos Santana, who is also a member of the ICAP Board of Directors. Those three legends were joined by Marcus Miller on electric bass, Cindy Blackman Santana on drums, Dave Holland on upright bass, Zakir Hussain on tabla, George Whitty on keyboards and synthesizers, and vocalists Kalil Wilson and Andy Vargas. 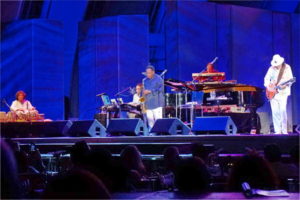 After a short break, the 15,000-plus concertgoers thrilled to the wave of energy emanating from the diverse band of headliners, who soared as a unit through a 90-minute adventure. In keeping with the evening’s theme, the second half kicked off with an extended rhapsody on Beethoven’s “Ode To Joy,” a pastiche of many musical motifs laced with the spoken words of noted peacemakers such as Martin Luther King Jr. and Daisaku Ikeda.

Herbie Hancock took the lead throughout most of the evening—except for a few memorable moments when he ceded leadership duties to Mr. Santanta—performing on acoustic piano, keytar, and even adding some vocal pyrotechnics via his vocoder. 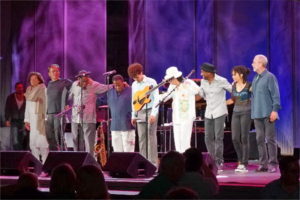 The energetic drumming of Cindy Blackman Santana on one side of the stage and expressive tabla playing from master Zakir Hussain on the other, infused the ensemble all evening with crosscurrents of rhythm and polyrhythm.

While Wayne Shorter filled various sound spaces with the cool, sparse beauty of his alto and soprano sax playing, Carlos Santana thrilled the crowd with his signature Latin-tinged electric guitar sound, occasionally changing things up with some delicate acoustic work.

The cohesiveness of ensemble seemed to present for all to see a microcosm of what the program was celebrating — peace — a topic particularly dear to the ICAP members onstage. 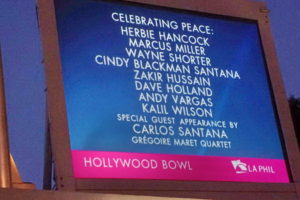 A few years back, in May 2005, Messrs. Hancock, Shorter and Santana (along with the Santana Band) traveled to Japan for concerts billing them as “Emissaries of Peace.” After performing in Yokohama and Osaka, they made their way to Nagasaki and Hiroshima, taking time out to visit Hiroshima’s Atomic Dome and museums and commemorative sites in both cities pertaining to the nightmare of nuclear warfare. The three expressed their hope that their concert tour could serve as a drop of water that could generate spreading ripples of peace across the planet, and they have been working in that vein ever since.

As Carlos Santana says: “Now more than ever, our total commitment to spiritual and divine principles is needed. We are the healers of life…let us accentuate beauty, grace, elegance, excellence and dignity in everything we do and are.” (from the ICAP exhibition titled, “Artists as Peacemakers.”)