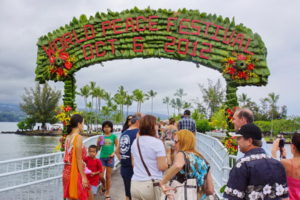 The County of Hawaii hosted its third annual World Peace Festival on Oct. 6 at the beautiful Coconut Island or Moku Ola, which is Hawaiian for “island of life.”

More than 1,200 citizens came out to enjoy this family-friendly festival, which featured a vast array of cultural displays and performances, arts and crafts, and culinary treats, all bathed in the warm glow of aloha spirit.

The festival came together as a partnership among Hawaii County, the Hilo Downtown Improvement Association and the International Committee of Artists for Peace. 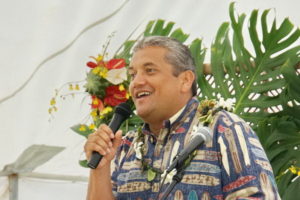 In his welcoming remarks, Mayor Billy Kenoi said, “On this beautiful day, we celebrate and honor peace and leaders of peace such as Mahatma Gandhi, Dr. Martin Luther King Jr., Dr. Daisaku Ikeda, Queen Liliuokalani and all other people who are champions of compassion, love, respect, care and sharing which is the spirit of aloha.”

The mayor encouraged participants to continue to “share the values of those peace leaders as well as of the kupuna (elders) who are looking over all of us and give aloha to our kamali’i (children), so that many years from now Hawaii will still be a land of love and aloha.” 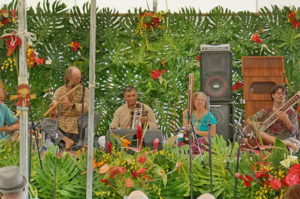 He also expressed appreciation for the many efforts of the behind-the-scenes crew, as well as the volunteers who garlanded the stage and the gate and bridge to Coconut Island with a spectacular display of orchids and other flowers.

Daisaku Ikeda began his very first travels for peace in Hawaii, on Oct. 2, 1960. Mayor Kenoi—having being inspired by Dr. Ikeda’s peace efforts—pledged to present an annual World Peace Festival in the first week of each October. 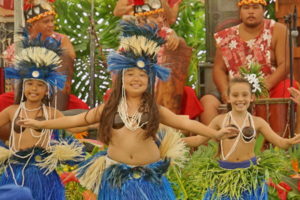 Alice Moon, executive director of Hilo Improvement Association, commented: “I have been very honored to be asked by Mayor Kenoi to produce this wonderful World Peace Festival. This project is so worthwhile for two reasons—one being that such diverse artists are sharing their art forms, and the other is that this festival sends an important message of positive energy, sustainability, spiritual connection and world peace. It is also a joy to work with business associates, vendors, crewmembers and volunteers for the noble cause of peace. This is our third World Peace Festival, and an increasing number of Hilo citizens have been looking forward to this happy celebration.” 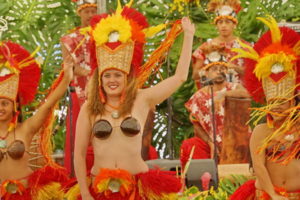