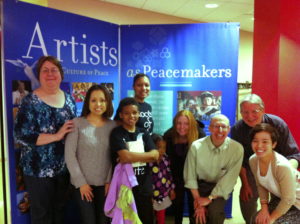 Pasquerilla Spiritual Center—the largest interfaith spiritual center on any college campus in the United States—hosted ICAP’s exhibition, “Artists As Peacemakers.” The exhibition, consisting of brilliant photographs and inspirational quotes from artists around the world, filled the lobby of the spiritual center, allowing students, faculty, and members of the community to explore it at their leisure.

To celebrate this exhibition and to officially open the exhibition on April 10, Dr. Susan Russell of the School of Theatre discussed the historical relationship between artists and peace. In ancient Greece, she said, actors were considered conduits from the gods. During squabbles between city-states, if a traveling troupe of actors approached, a truce was called so that everyone could enjoy the show. 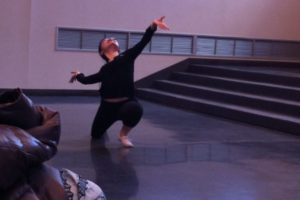 Ms. Spence Ford, professor and head of dance, School of Theatre, danced to “The Impossible Dream.” Hope Schmid read Ms. Ford’s experience about living as a Broadway performer and developing a deeper understanding of the impact that individuals have on their environment toward creating peace. Her story told of the musical This Is America, The New World, which played at Morehouse College, where Dr. Martin Luther King, Jr., studied. She recalled that Dean Lawrence Carter said: “We have been trying for 10 years to see this kind of diversity here. You have done it in one afternoon.” 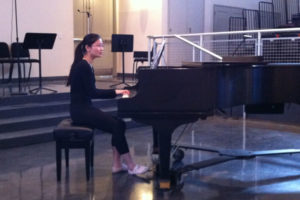 The second event, on April 13, opened with Chris Staley, poet laureate of Penn State, who spoke quietly and genuinely about life and time and that, ultimately, relationships are what matter most. His words prompted his listeners to consider more deeply what kind of life they want to create.

Kikora Franklin, assistant professor of dance, introduced an exchange student from Beijing University, Susan Lu Zhang, who performed a traditional Chinese dance, delicate and joyful, and also a Chinese composition on the piano.

Margaret Okere of State College, Penn., shared several poems, including some she had composed, expressing anti-war sentiments. Elman Brown from Lancaster, Penn., shared his philosophy of peace and five of his paintings. 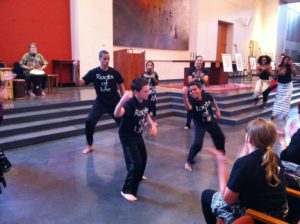 To conclude, everyone participated in a community circle, a tradition in African dance where participants dance together in a circle, and individuals alternately dance into the center. As Chris Staley said as he left, “The spirit in this room is amazing!”