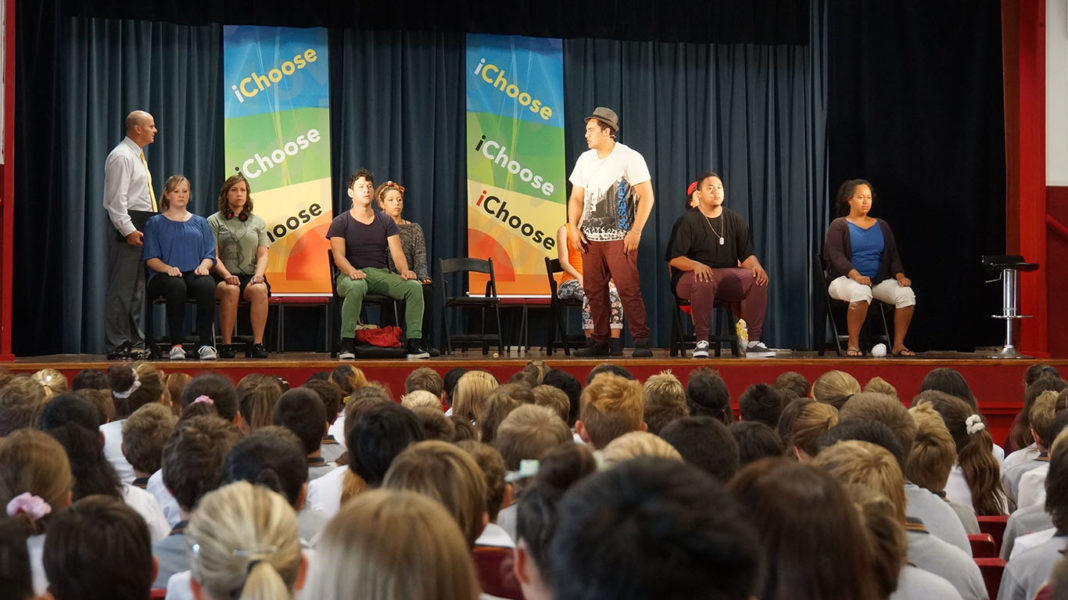 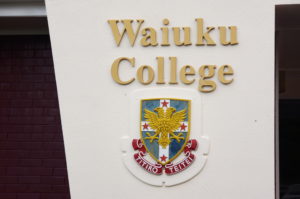 Situated in an attractive rural and farming environment with wild west coast beaches, the meandering Waikato River and the wide open Manukau Harbour , approximately 45 minutes from Central Auckland, a co-educational high school from year 9-13 with 830 students, Waiuku College provided the opportunity for more than 400 students to experience iChoose. Students excitedly responded to the program as well as the actors’ personal accounts of their own experiences of violence (both passive and physical) and bullying.

After viewing the iChoose performance and subsequent audience-performer interaction session, Don Starchan, an administrator at the School commented, “Yesterday I was dealing with the students who were involved in bullying. I know this presentation will mean a lot to them. Sadly as well I know of the incidents of suicide in a family of the students. So that is a close and personal link. I see a lot of passive violence, not doing anything, not stopping, not helping. I think iChoose presented today with the great stories and full of energy was quite convincing and connected well to our students.” 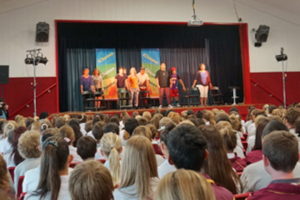 Some striking comments submitted by the students include the following:

“Your so inspirational when yous came to Waiuku College I could relate and i got so upset but was trying so hard to hide it xxx Im 13 and a female and have had so much thoughts about suicide sometimes but im only 13 how could it be possible but thankyou so so so so much for comn it made me see that im.not alone and stuff em i have chosen to see my school guidence counciler cuz i know itll do me good to let it all out and i wanna thank yous again ha just so u know im crying atm.but with happiness cuz for once in a long time im happy as choice thanks Love all yous. Xxxxxx”(Anonymous)

“The program was awesome and it was funny as well. I liked everything about the show, particularly that you had little stories and how you made it funny. I learned to respect others and to forgive others.” (Susanna Passi) 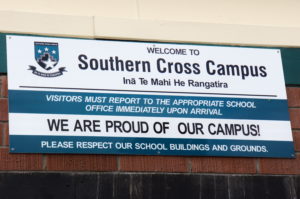 Southern Cross Campus is an area school that caters to students, from year 1 to 15, predominantly of Pacific Descent who, according to the Educational Review Report, are positive about learning, enjoy school, and speak highly of their teachers.  The Southern Cross school motto is “Ina Te Mahi He Rangatira” which, in Maori, means “By her deeds a Chief is known.”

The school’s mission is to develop and strengthen, in addition to excellence in life and scholastic pursuits, students’ values of respect (including respecting self, others, property and environment; integrity; responsibility; diversity; tolerance; and an inquiring attitude with respectful questioning). It was truly exemplified by the 250 students who quickly became engrossed in the iChoose performance. 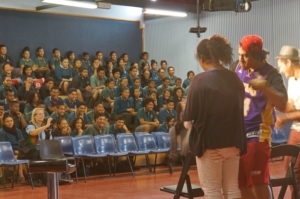 As was done with other shows, when “Jane” in the cast told about about Parihaka, the students showed their great interest and enthusiasm. “My presentation is on Te Whiti o Rongomai and Tohu Kakahi. They founded Parihaka in 1867 in Taranaki.  In the 1870s the settlement became the centre of a major protest campaign of non-violent resistance. Recognizing the destructive effects of war, Te Whiti and Tohu declared they would use wairua rather than weapons to claim their right to live on land they had occupied for centuries…After the troops came, the men were arrested. And then, the women took over. 17 years later, some of the men were released. They returned to Parihaka and were reunited with their whanau. So that’s why I’m proud of my whanau cos of  their tikanga” The students appeared very proud of the heritage of the peaceful passive resistance approach they inherited.

Some comments submitted after the show included the following:

“It was kool because I like the way they acted and it was awesome. I like the part when they were arguing and singing too. I learned about bullying and relationships as well and how they felt about their life too.” (Wiki Heta)

“I like the part where the guy was talking about his mom passing away.” (Atawhai Kapci)