On May 30, the Prosser Career Academy (high school) on Chicago’s west side, welcomed guitarist and ICAP artist Marcus Dunleavy for a return concert engagement. This time, Mr. Dunleavy—who has been appearing annually at the school since 2008, when he performed in conjunction with Prosser hosting ICAP’s “Artists as Peacemakers” exhibition—was displaying his artistry in support of a school assembly to promote the antiviolence project “Now Is The Time.”

Billed as “a citywide initiative inspiring Chicago’s young people to make positive change in their communities and stop youth violence and intolerance,” NITT is a collaborative venture in which The Chicago Public Library, Facing History and Ourselves (an international education organization focusing on historic moral questions), and the world-renowned Steppenwolf Theatre Company, have joined forces with other local theaters, cultural organizations and institutions to foster dialogue in the city’s many neighborhoods. In recent years, Chicago has been rocked hard by violence, largely involving young people. 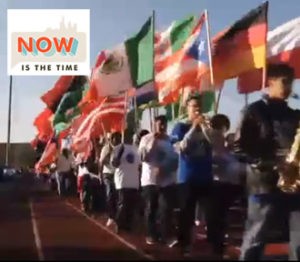 The assembly began with Melanie Thompson, a junior at Prosser who recently lost a cousin in an incident involving gun violence, introducing a brief video installment of a moving documentary series in which she is featured. The video presents a Prosser student rally and peace march, as well as efforts to promote dialogue during Prosser’s annual Peace and Unity Week held most recently last fall.

Ms. Thompson, a member of the Steppenwolf Youth Council is shown speaking at a Unity assembly. “The key is you. It’s about your voice. You have a voice, and this is how you get your voice out there,” she exhorts fellow students, encouraging to participate in upcoming NITT activities. At this assembly, she urged students to participate in an NITT dialogue called “Teens at the Table.” 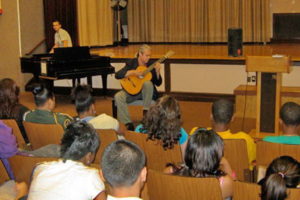 Prosser principal Ken Hunter then introduced Marcus Dunleavy, a master classical and fusion guitarist, who performed a variety of music from Spain and Latin America. Among the selections he performed were flamenco-inspired works by Spanish composer Isaac Albeniz, solo-guitar arrangements of music by Argentine tango master Astor Piazzolla, and the rousing prelude from J.S. Bach’s Partita for Violin No. 3 in E Major (BWV 1006).

Mr. Hunter asked Mr. Dunleavy to share—in between musical selections—the values espoused by the International Committee of Artists for Peace as well as words of encouragement by Daisaku Ikeda.

The words of a poem to youth by Mr. Ikeda, titled “To My Beloved Young American Friends,” proved especially resonant:

With a roar, valiant and ceaseless,

the absolute values of peace and culture . . .

NOW IS THE TIME

once more to construct

a land of unshakable joy and prosperity,

fresh with the love of humanity . . .

to converse, to call from the heart,

to move and meet—

for this friend here

for that friend there

for the people of this city,

NOW IS THE TIME

for us to join together—

you and I and our friends—

to enjoy the beautiful, precious bonds,

the deepest dimension of our shared humanity,

to expand this golden circle

into the coming century.

living now and into the future!”