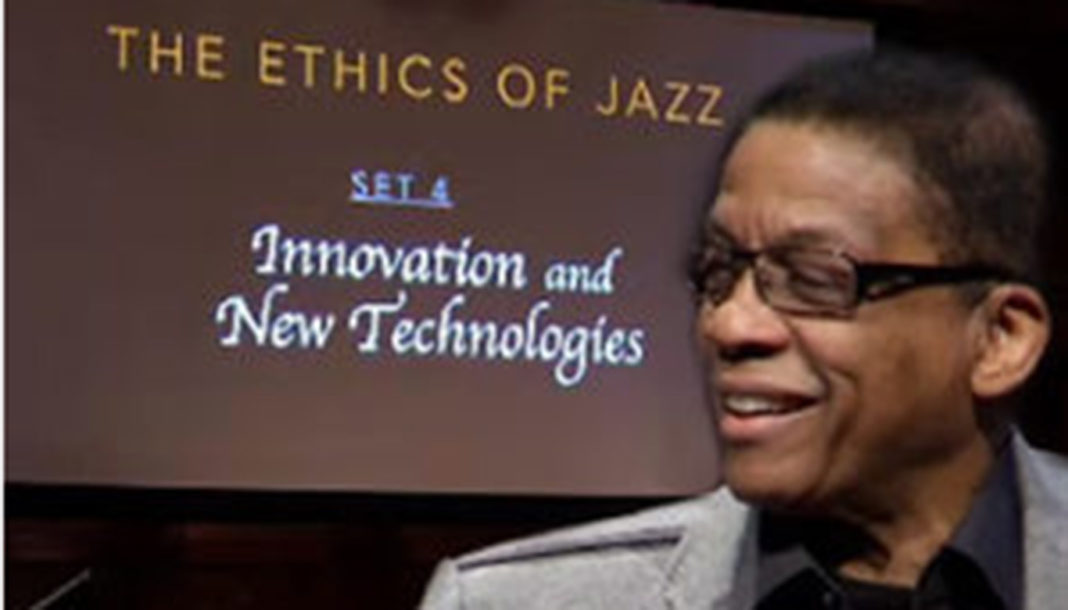 For the fourth lecture in Herbie Hancock’s “The Ethics of Jazz” series at Harvard—this one titled “Innovation and New Technologies”— this year’s Norton Professor of Poetry revealed a little of his “mad scientist” side, taking the audience on a virtual tour of his personal gadget laboratory.

The event, which took place in the late afternoon on March 10, at the university’s Sanders Theatre, was introduced by Kay Kaufman Shelemay, Harvard professor of Music and professor of African and African-American Studies.

While recalling Professor Hancock’s remarkable career, Professor Shelemay reminded the audience that Mr. Hancock’s creative work has always been marked by innovation and exploration with, as he has put it, “an affection for the unknown.”

After a quick reference to his past lectures on subjects such as cultural diplomacy, rule-breaking, the ethics of Miles Davis and other topics important to our societal future, Mr. Hancock suggested that the audience “have some fun taking a peek” inside his gadget laboratory, where he would then reveal some new things on the horizon.

Ever since boyhood, Professor Hancock recalled, his curiosity led him to dismantle clocks, watches and, disastrously, a model train set. Fortunately, he followed his passionate interests. While attending Grinnell College, he left more practical pursuits like electrical engineering for a major in music, and graduated with a degree in music composition. 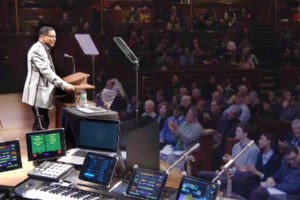 Growing up in a house filled with music – from Maurice Ravel to Thelonius Monk – Mr. Hancock became aware early on of the impact science was having upon the world of music. The objects of his fascination were fusing, and he became, as he puts it, a “jazz snob.” But when Herbie Hancock first worked with an electronic piano in a 1968 recording session with Miles Davis, he discovered that his preset opinions about things he had not personally experienced were holding him back. If his mentor Miles Davis could be open to new technologies, then he could, too. And he’s never looked back.

Professor Hancock mentioned that Miles Davis and his collaborator, the jazz saxophonist/composer/producer Teo Macero, were doing creative things with a razor blade and two-inch tape that today can be done with a click of a mouse. Cautioning that while the present-day ease and depth of access to technology can sometimes threaten the integrity of the music, he also made clear that today “there are new inroads into composition that combine visuals, music, and technology that blur the lines that in the past separated the three.”

Professor Hancock’s explorations led to just such blurring of the borders. For instance, in the early 1970s, he became one of the first to create film music by weaving together synthesizers and orchestral instruments, as evidenced in his scores for Death Wish and The Spook who Sat by the Door.

It was during this fertile period that he met Bryan Bell, who became Mr. Hancock’s technology collaborator and sound engineer.
“With (Bryan’s) expertise,” he told the crowd, “I was able to turn my entire recording studio into one giant instrument; allowing interaction among all of my favorite keyboards and devices. And there were dozens. All made by different manufacturers.” 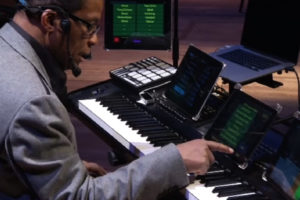 His dream was to use a single keyboard to control all of these devices, but it would be eight years before that dream was realized when the music industry agreed on a new format called “MIDI” (Musical Instrument Digital Interface) that would facilitate all of the electronic instruments, computers, etc., in working together.

The innovations kept coming: a portable synthesizer, the first digital patch bay for music, and many others. Through a 1976 invitation to Xerox PARC, the Palo Alto research center, Mr. Hancock developed a fortuitous association with the man he considers the father of personal computing, the visionary Alan Kay – a man who had famously said: “The best way to predict the future is to invent it.”

When the graphical user interface (GUI) was invented by Mr. Kay and his team, Herbie Hancock recognized that it would “not only change the course of music but revolutionize the world.” His two passions, music and science, were now more intimately linked than ever, but even he had no idea of the depth of that marriage. 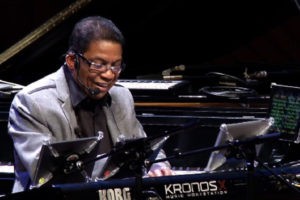 Mr. Hancock then augmented the virtual tour of his gadgets by talking about sequencers, and their evolution into an array of music software and devices he continues to use extensively. He discussed the Vocoder, of which he is known as one of the first users, and how it could completely replace his voice with an electronic version that could then be modified in endless-seeming ways.

Another of his associates, and a great source of technological inspiration, was Dr. Patrick Gleason, who played the Moog Synthesizer for some of his early albums in the 1970s. This led to techniques in the ’80s that became staples of the hip-hop era, such as scratching and turntables, and the Grammy-winning single “Rockit,” the first song to blend jazz and hip-hop.

Mr. Hancock then gave a 20-minute performance/demonstration of technologies and techniques with acoustical instruments, Digital Audio Workstations, a three-dimensional motion controller, and other devices, to great applause.

The Norton Professor wrapped up by thanking those fortunate to have gathered for letting him introduce them to the ideas and individuals who influenced him in his perpetual search for new ways to blend music and technology.