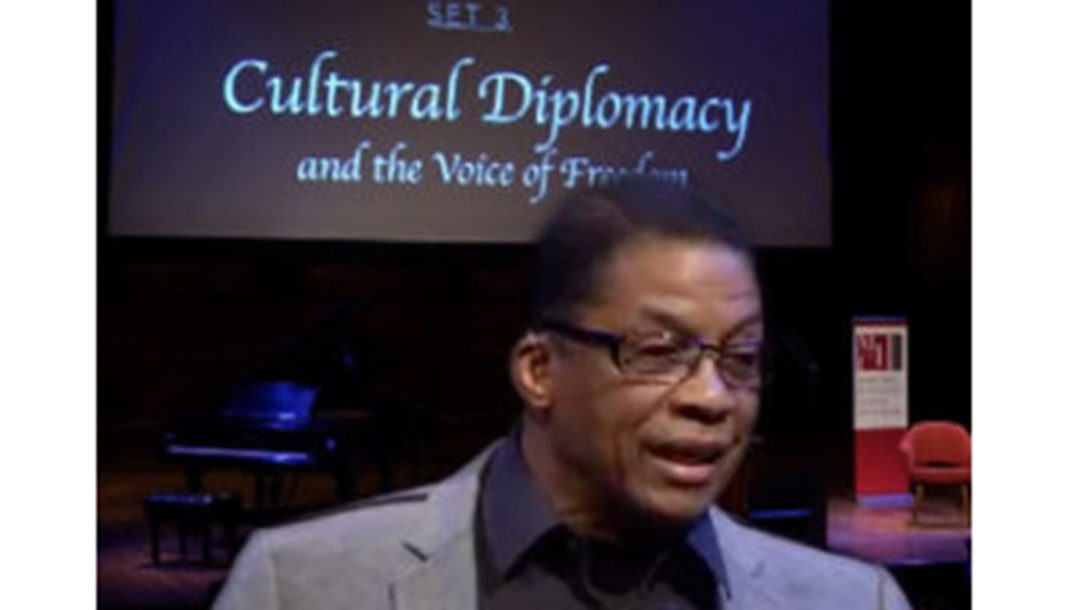 After a laudatory introduction by Ingrid Monson, Harvard’s Quincy Jones Professor of African American Music, Herbie Hancock took the podium in the historic Sanders Theatre for the third “set” in his six-lecture series on “The Ethics of Jazz.”

Ms. Monson first thanked Mr. Hancock “for generously engaging with our students in these past few weeks in ways that have been utterly transforming for them.” She went on to say that “jazz always has had a message . . . of dignity, diversity, freedom and moral conscience . . . which transcended any of the personal failings of its all-too-human artists . . . a message that could not be contained.”

Ms. Munson informed the audience that Mr. Hancock was named, in 2011, the UNESCO Goodwill Ambassador for the Promotion of Intercultural Dialogue. “His participation in UNESCO,” she told the assembly, “led to the establishment of International Jazz Day (April 30), which celebrates the music as a vehicle for promoting peace, intercultural dialogue, and human rights.”

Then it was time for Harvard’s 2014 Charles Eliot Norton Professor of Poetry, Herbie Hancock, to begin his “set,” titled “Cultural Diplomacy and Voice of Freedom.” The professor, who is also co-president of ICAP, started off with a bold declaration: “One question I’m often asked is, ‘Do you think music can affect the establishment of world peace and change people’s minds?’ My answer? ‘Yes. Yes I do.’ Jazz has been the voice of freedom for millions of people for over a century.”

From there, he went on to make such vital points as:

• “I believe and try to convey [to younger musicians and students] that we must all participate in designing the human orchestra of life that will move humanity several steps forward, rather than focusing on creating a world that’s greater for the few and worse for the many.”

• “In 1994, and of considerable consequence to me, we (the Thelonious Monk Institute of Jazz, of which Mr. Hancock is chairman, and whose president, Thomas Carter, was in attendance at the lecture) were the first cultural organization to bring the therapeutic force of music to South Africa when Nelson Mandela became president after the end of Apartheid. Jazz opened doors and helped heal a country that had suffered unfathomable hardships and pain.”

• He also related how former U.S. Secretary of State Madeleine Albright recognized the diplomatic value of jazz, and how she frequently, on the eve of important diplomatic conferences, brought various world leaders together for an outing at a jazz club.

• In a lengthy, moving description of his world travels, he shared his experience of visiting Hiroshima, a trip that included an invitation to play a piano that had been lovingly restored in the aftermath of the atomic bomb that had leveled the city near the end of World War II. “I began to play a few notes and…wow…that piano had an amazing intensity. I was immensely captivated by its sound and felt overwhelmed with emotion.” 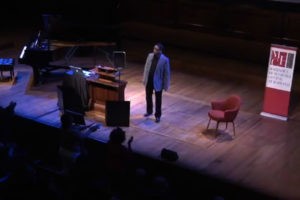 Professor Hancock also shared stories of the cultural diplomatic assignments he’d fulfilled under U.S. Presidents Bill Clinton, George W. Bush, and Barack Obama. And he discussed his recent activity for UNESCO, including the signature achievement of helping establish International Jazz Day, a partnership bringing together UNESCO, the United Nations, and the Thelonious Monk Institute of Jazz.

“Last year, every single country on the planet — that’s 196 countries including Syria, North Korea, Afghanistan, Iran, Iraq — participated in Jazz Day. And we reached over 1 billion people of diverse cultures, religions, nationalities and ethnicities. I hoped that Jazz Day would spread the joy of spontaneous creation that exists in the music and be recognized for its magnitude, social impact, and historic significance in global culture, and I’m so pleased to say that the response has far exceeded my wildest dreams.” 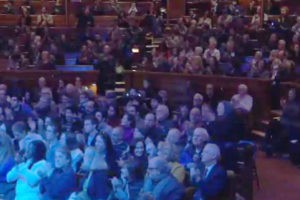 The International Jazz Day event, he explained, was inspired by UNESCO’s World Philosophy Day. “Jazz isn’t verbally philosophical,” said Mr. Hancock, “however, philosophical ideas are beautifully expressed when you blend together the common language of music and the improvisatory principles that are fundamental in jazz with a visceral performance that conveys those ideas.”

An abundance of expansive ideas involving and branching off from jazz are sure to be conveyed over the rest of this month in Professor Hancock’s highly anticipated three remaining “The Ethics of Jazz” series lectures, whose topics include innovation, new technologies, Buddhism and creativity.