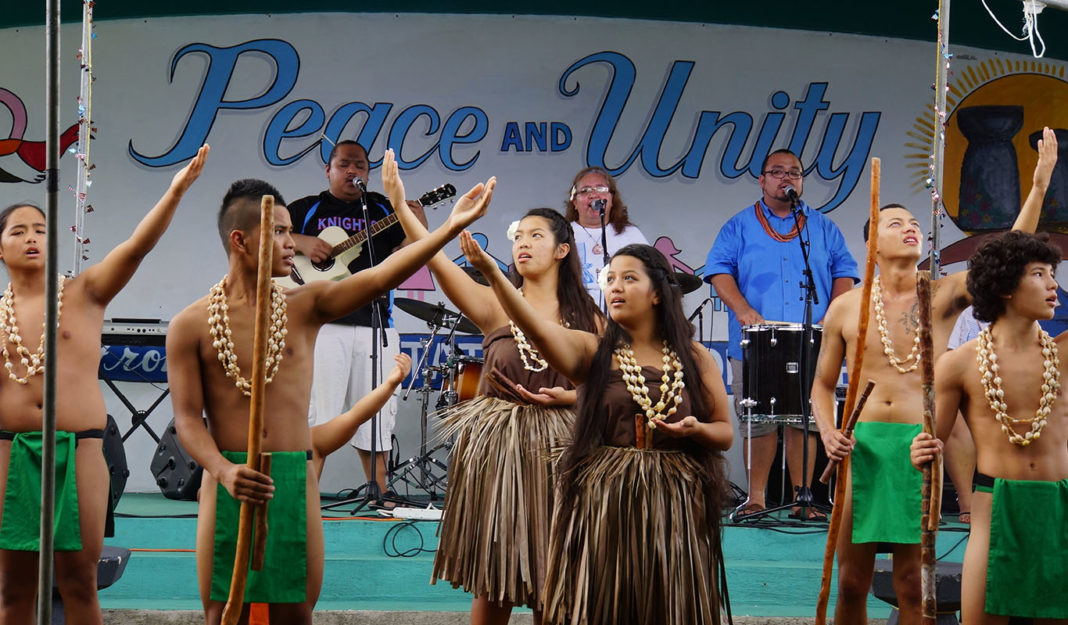 This year’s Latte Peace Festival—the third annual event—opened at Guam’s Tamuning Park on Jan. 17 with a celebration promoting cultural exchange with neighboring islands. This poignant gesture is an expression to the world that the citizens of Guam, which is situated in the western Pacific and has withstood the horrors of war, possess a powerful and unyielding commitment to peace. 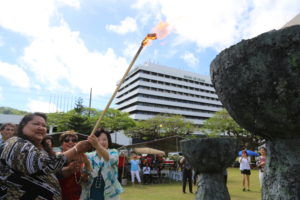 More than 2,500 citizens gathered for this year’s festival, which derives its name from the carved limestone latte stone used as a key element of ancient building support pillars, and as monoliths to honor ancient ancestors. The lattes were devised by the Chamorros, the indigenous people of the Mariana Islands, which includes Guam.

The event was co-sponsored by the Mayors’ Council of Guam, Catholic Daughter of Americas, the International Committee of Artists for Peace, and other community partners.

After lively performances by a group of Chamorro youth (Bendision Fuetsan Chamoru’ta), and an invocation by Monsignor Brigido Arroyo, Mayor Louise Rivera (from the municipality of Tamuning-Tumon-Harmon) delivered her opening remarks, stating that in light of the culture and people of the land: “. . . [We] chose the latte stone because of what it symbolizes: the foundation of homes—what it was used for in the past; and today what it represents — when people see the latte stone, they think of the culture, of what we want to embrace. And, of course, peace . . . what we all want all over the world.”

“What better time to do this than the beginning of the year,” she continued. “We really are happy that all of you could be here with us today even with the . . . tropical depression that we had during these past few days. Look how wonderfully it cleared up for us!” 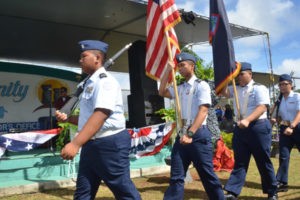 Mayor Rivera then called on the John F. Kennedy ROTC for the presentation of colors. Following an introduction and swearing in of municipal planning council members, Lt. Gov. Raymond S. Tenorio called for the need to return to “the values and principles that made our country, our people and our nation strong.” Mr. Tenorio encouraged festival attendees to look at the day as an opportunity for peace and solidarity.

Mr. Tenorio praised all the participants and acknowledged the festival for its capacity to bring so many people together. He then read a proclamation that he had signed, along with Gov. Eddie Baza Calvo, which proclaimed January 26, 2015, as “Dr. Daisaku Ikeda Appreciation Day.” 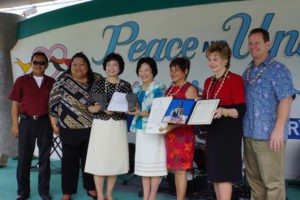 The proclamation recognized Dr. Ikeda for continuing to celebrate Guam as the birthplace of the peace movement. Guam, he said, has “served as pillar of our peaceful island community” with the annual Latte Peace Festival, the Pacific Islands New Millennium Peace Conference, and the development of the Tamuning Community Park, which is located across from the International Trade Center where the first World Peace Conference was held in 1975.

Another proclamation, this one by the 33rd Legislature of Guam, honored the SGI’s 40th anniversary and named Dr. Ikeda and Mrs. Kaneko Ikeda “World Champions of Peace” for their tireless efforts and their dedication to promoting world peace. It was signed by Speaker Judith T. Won Pat and Legislative Secretary Tina Rose Muna Barnes.

U.S. Army Master Sergeant Marrion Parker then addressed the crowd, quoting Dr. Martin Luther King Jr., who had once famously said: “Life’s most persistent and urgent question is, ‘What are you doing for others?’”  “So when I saw the question,” Mr. Parker explained, “the term service continued to pick away at my conscience . . . Dr. King’s life work validated that if we are living a life of service, then we are living beyond selfishness, beyond greed, beyond personal needs, committing to and living on a level of higher self. When we serve, we discover. We discover that often the most important things that we have to offer aren’t tangible things at all. Because, through the discovery of service, we start to uncover the fullest range of resources at our disposal—which includes our time, our presence, our passion, and our attentiveness.”

Next, the Catholic Daughters of the Americas sang a moving rendition of “Let There Be Peace on Earth.” 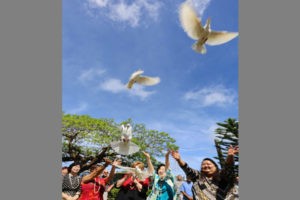 Those attending the morning program participated in a ceremony for the unveiling of three latte stones. In what became an annual tradition, following the lighting of the latte stones, a wreath was laid at the park’s Peace Monument accompanied by the release of a flock of white doves.

The event was capped with remarks form the governor of Guam, Eddie Baza Calvo, who said: “Several months ago, I was at the beach at Tumon with my family. I was watching the tourists having fun, swimming and playing together. It was a crowded day. Then I thought about the international news and all the problems occurring worldwide . . . and it is very complicated, I understand . . . but then I thought about what I was seeing at that beach—individuals—Japanese, Korean, Chinese, Russian, Chamorro, Micronesian and American. They were all together having a good time. It symbolized to me the importance of humanity and how we are really all one and the same. I want to thank you all because that is the message you spread worldwide.”