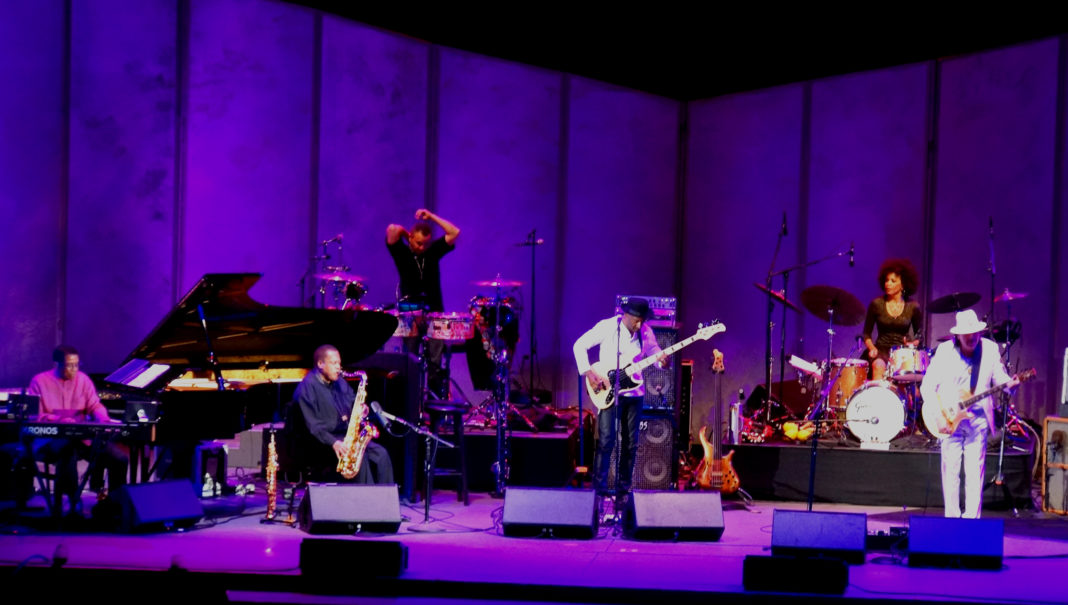 Los Angeles — The jazz rhythms of Mega Nova stampeded out from the Hollywood Bowl band shell on the pleasantly cool evening of Wednesday, Aug. 24.

Carlos Santana’s latest project is a super group of jazz masters, including ICAP co-presidents Herbie Hancock (on various keyboards) and Wayne Shorter (on soprano sax), Marcus Miller on bass, and Cindy Blackman Santana pounding away ecstatically on drums. Mega Nova is particularly a dream project for Mr. Santana, who professes a lifelong love for jazz but is normally known for performing in other musical milieu.

Among the various highlights enjoyed by the capacity crowd (nearly 15,000) at the Bowl was a lengthy opening jazz smorgasbord of many melodies, including Mr. Hancock’s classic “Watermelon Man,” Tito Puente’s “Oye Como Va” (immortalized by Mr. Santana in the 1970s), Cyndi Lauper’s “Time After Time”; and a memorable rendition of John Coltrane’s seminal “A Love Supreme.”

According to Mr. Santana (an ICAP board member), the purpose behind this ensemble, which is nearly exclusively dedicated to improvisational performance, is to act as “peace ambassadors,” and, as he recently told Rolling Stone: “We’ve been to Hiroshima and Nagasaki, and we saw what that stuff is. We play music to bring, once and for all, inclusiveness and family.” 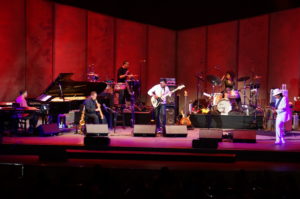 This evening’s concert served as another bead in a years-spanning necklace of peace activities for these musicians, who’ve performed together in various associations and collaborations.

This same group was part of a larger ensemble that presented a “Celebrating Peace” concert here at the Hollywood Bowl in 2012. And in 2005, on a tour known as “Emissaries of Peace” and sponsored by the Min-On Concert Association, Mr. Santana and his Santana Group (nearly 30 performers), along with Mr. Hancock and Mr. Shorter played in locations throughout Japan. The tour was especially planned to have poignant concerts in Hiroshima and Nagasaki, sites of the only atomic bomb blasts, and the headliners made historic visits to the peace museums in both of those cities. The chosen tour title, “Emissaries of Peace,” refers to the intention set by the musicians that everyone who attended the concerts would awaken to their unique individual roles as peacemakers, as emissaries of peace.

In the same Rolling Stone piece, Mr. Hancock is quoted as saying: “We have the capacity for creating a world that we can all believe in, one that we can look forward to for ourselves and our children . . . What we want to do is make a step toward bringing cultures and ethnicities and people in general together, and show the value of collaboration from the standpoint of respect. The whole concept of building something together: That’s what this is about.”

The evening started off with another group headlined by a legend — Booker T. Jones, founder, of course, of the renowned Booker T. and the M.G.’s, who had countless recognizable classics in the ’60s and ’70s like “Green Onions,” “Jellybread” and “Theme from ‘Hang ’Em High’.”