U.S. President Woodrow Wilson long ago named them “America’s Band,” and, providing service through music, the Navy Band Great Lakes performs more than 500 times each year throughout a nine-state area of the United States. The band — formed more than 100 years ago (1911) and once led by Bandmaster and Lt. Commander John Philip Sousa — today entertains more than 60 million people as the U.S. Navy’s “Ambassadors to the Midwest.”

On January 25, the Liberty Call ensemble of the Navy Band Great Lakes was billed as the headliner act for the International Artists for Peace Concert held at a downtown Chicago cultural center. Liberty Call, which is acknowledged on the Navy Band Great Lakes website as “the most versatile ensemble” within the Band, performs in many musical genres, including traditional New Orleans-style music, jazz, country, rock and blues. 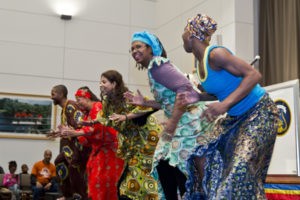 The concert also featured a series of cultural performances from African drummers, Korean, Ghanian, Japanese and Latin dancers, and a Chinese chorus.

By the time Liberty Call’s leader MUC Andrew Conover, brought the group to the stage, the audience was clearly on the edge of their seats with anticipation.

The group kicked off their set with a swing arrangement of “Stars and Stripes,” which caused the audience to jump to their feet and roar with applause, demonstrating this event was not just a military concert, but a celebration of America’s indigenous art form, jazz, and the freedom, spontaneity, and unification of culture intrinsic within it. 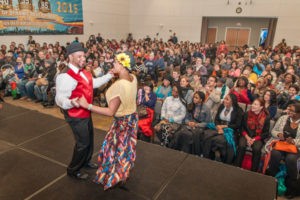 Liberty Call performed instrumental arrangements from jazz legends Duke Ellington, Benny Goodman, and Count Basie’s Orchestra. The band also featured vocalist MU3 Danlie Cuenca, as she sang memorable standards “Almost Like Being in Love,” “Straighten Up and Fly Right,” and “L.O.V.E.,” which inspired the audience to sing along.

The crowd was mesmerized as MU3 Jason Gay performed an extended tenor-sax solo introduction to Billy Strayhorn’s “Take the A-Train.” Other performance highlights included trading of solos between powerhouse lead trumpeters MU1 Michael Bogart and MU3 Michael Bookman Jr. during “It Don’t Mean a Thing,” and a high-intensity drum solo in the middle of Louis Prima’s “Sing Sing Sing.” 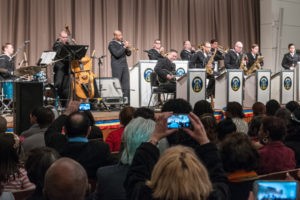 Liberty Call proudly honored the many veterans present with the playing of the service songs and brought the performance to its conclusion with a beautiful patriotic arrangement of “America the Beautiful,” reminding the audience that U.S. Navy sailors are deployed around the world, around the clock, in defense of our freedom.

ICAP expresses its great appreciation to the Great Lakes Bulletin for permission to republish the article above.