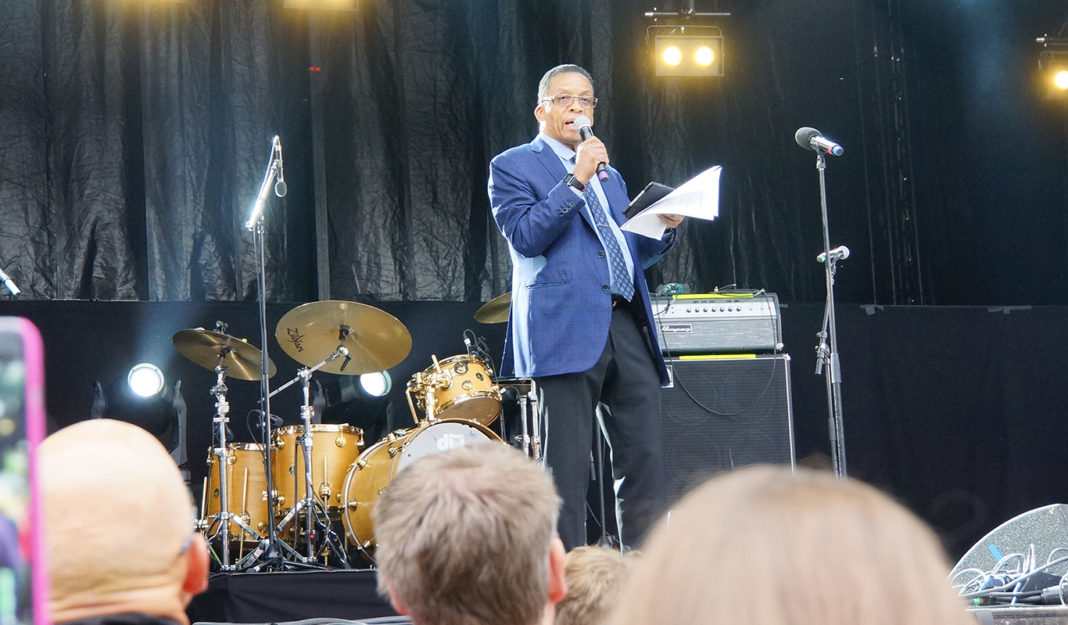 Herbie Hancock, UNESCO Goodwill Ambassador and co-president of the International Committee of Artists for Peace, was a key speaker at the 70-year Hiroshima and Nagasaki Atomic Bombing Remembrance Concert at Youngstorget Square in Oslo, on August 6. August 6 and 9 marked the 70th anniversaries, respectively, of the atomic bombings of Hiroshima and Nagasaki.

There are nine countries of the world today that possess nuclear weapons, which total 16,000. The chance that a nuclear weapon to go off, either by intent or by accident, is greater than during the Cold War. Presently, however, there remains a historic opportunity before us to eliminate the world’s deadliest weapons. In recent years, there has been an international momentum for an international legal ban on nuclear weapons that would be in align with all other weapons of mass destruction.

Wielding this message as a banner, a joint concert then ensued, featuring such artists as Highasakite, Fjord Baby!, Sandra Kolstad, Ase Kleiveland and Bridge.

For the solemn occasion, Herbie Hancock delivered an address that included the following remarks:

It is a deep honor for me to be here with you at this historic gathering for peace in Oslo.

Your presence is testimony that today there is hope for a renewed vision for peace. We are here together to declare that 70 years after Hiroshima and Nagasaki, peace is the way, and the banning of nuclear weapons is the only way.

In my role as UNESCO Goodwill Ambassador and co-president of the International Committee for Artists for Peace, I am here to work with you, the people of Norway, and ICAN, towards our common goal.

This all started for me with the “Declaration Against Nuclear Weapons” in 1957 by the educator and visionary Josei Toda, which was delivered to 50,000 youth in Japan. This was a groundbreaking call to action. Since that time, Daisaku Ikeda has carried on this vision globally, with 32 annual peace proposals to the United Nations. Dr. Ikeda has dedicated his life these past six decades, to peace and the abolition of nuclear weapons, including a recent document that gathered 5 million signatures toward that end. You may not know, but he was at the core of the current global movement for the abolition of nuclear weapons. There is a connection among the historical figures of Mohandas K. Gandhi, Dr. Martin Luther King Jr, and Daisaku Ikeda, who are of the same mind for peace. In this regard, I believe that we are all of the same mind.

Today, there are 113 governments that are ready to start negotiations on a treaty banning nuclear weapons. Unfortunately, Norway is not among them, even though 8 out of 10 Norwegians are supporting such a ban and the vast majority of your Parliament wants Norway to be a champion of this process. The citizens put the politicians in office, don’t they? And, as a world citizen, I fully support this movement for the total ban of nuclear weapons. Treaty negotiations should be started today.

We are all encouraged to see recent trends towards increased reliance on renewable energy sources — wind, water and solar — but, alone, they cannot meet our current and projected energy needs.

I have recently learned, here in Norway, that there are new energy sources of great promise from a safety, environmental and non-proliferation perspective.

Let me say something about nuclear reactors. The concern is the materials that are used and the type of process, not the nuclear reactors themselves. Thorium, not uranium or plutonium, has the potential to make nuclear energy much safer and more efficient. It is extremely difficult and impractical to use for military purposes. In addition, Thorium can be used to dispose of current nuclear stockpiles of plutonium — isn’t this turning poison into medicine?

We should not demonize technology. It is not technology which destroys people. Human beings do that. We have to first look into our own hearts to instill peace, to make humanity the heart of technology. It is about the simple things . . . it is a change in behavior . . . it is a practice of kindness, consideration . . . a simple smile, hello and a thank-you . . . that’s where peace begins. And in so doing, we will be revealing what is ultimately in all our hearts.