Home Uncategorized Yo-Yo Ma Brings Chicagoans Together for a “Day of Conversation and Action.” 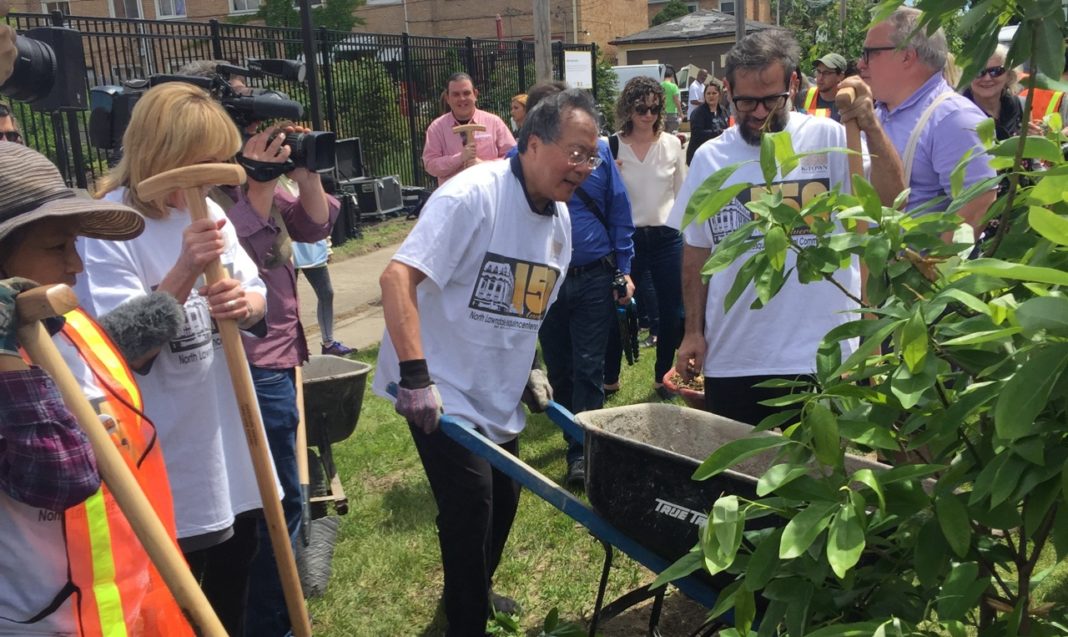 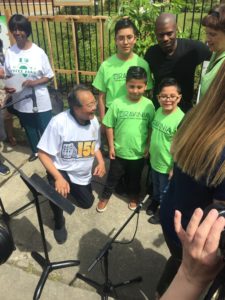 June 21, 2019 was designated “Day of Conversation and Action” in Chicago by internationally renowned cellist Yo-Yo Ma. The previous evening he performed all six of Bach’s solo cello suites continuously for nearly three hours with no intermission for fifteen thousand people in a free outdoor concert at Chicago’s Millennium Park. The program entitled “The Bach Project” is being presented in 36 cities around the globe. Alongside of each Bach Project concert, Yo-Yo and his team partner with artists and culture makers, cultural and community organizations, and leaders from across sectors to design conversations, collaborations, and performance in days of Action. These public events and creative experiences are different in every location; they demonstrate culture’s power to create positive change; they inspire new relationships, connect partners across locations, and ask us all to keep culture at the center of our efforts to build a shared future. 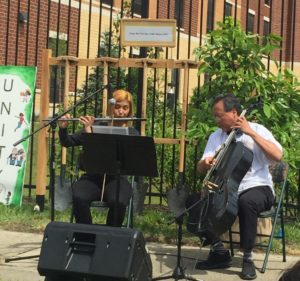 In his artists statement for the Bach Project Yo Yo shares: “Music, like all of culture, helps us to understand our environment, each other, and ourselves.  Culture helps turn “them” into “us”. And these things have never been more important….I share this music which has helped shape the evolution of my life, with the hope that it might spark a conversation about how culture can be a source of the solutions we need. It is one more experiment, this time a search for answers to the question: What can we do together that we cannot do alone?” Chicago’s Day of Conversation and Action focused on the question: How can we use culture to confront gun violence in the city? 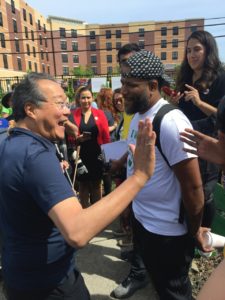 Two such events, which were attended by Chicago ICAP guitarist Marcus Dunleavy in his neighborhood, were “The Greening of North Lawndale” and “Cultural Conversation in Pilsen”. Together with the North Lawndale neighborhood, the City of Chicago, and the School of the Art institute of Chicago, the community came together to plant trees and site stones, continuing the construction of Unity Park. “The Greening of North Lawndale” project built on a partnership between artist Pedro Reyes and SAIC that reproduced Reyes’s work “Palas pro pistolas” (Guns into Shovels). North Lawndale-based gardeners, artists, and musicians led volunteers using shovels forged from melted down, donated weapons to continue the beautification of Unity Park at 19th Street and Kostner Avenue. 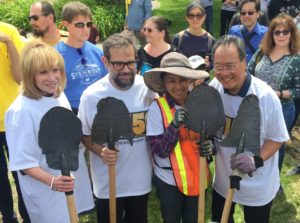 A Special opening program included a welcome from community leadership; a presentation of the project by Pedro Reyes and SAIC; and musical performances by Yo-Yo Ma, Civic Orchestra of Chicago flutist Alexandria Hoffman who performed on a flute which was created from a shotgun barrel, and student guests. In his opening words Mr. Reyes shared: “This transformation is a change in polarity from something that produces death to something that produces life.These trees become a natural monument.” And “This is a gathering of idealists…there is no garden without a gardener. Everyone here is becoming part of the effort to make this world a garden.” North Lawndale is a neighborhood known to be one of the most affected by gun violence in the U.S. 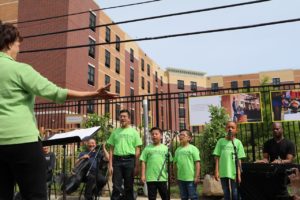 The event took place as one of the 150 year anniversary celebrations of North Lawndale. After his performance Mr. Ma shared: “150 years feels like a long time but it’s not a long time for a tree to grow and to grow a neighborhood and to strengthen the neighborhood…Our purpose, I think, is to constantly strengthen and renew forever so that we can cultivate ourselves for the future.” After purchasing the shovel that he used to plant a magnolia tree from Mr. Reyes, Mr. Ma remarked that he wished that (presumably now that it is no longer a weapon) he would be allowed to keep the shovel in his cello case as a carry-on on flights. He said that he would love to be able to use it to plant trees in neighborhoods suffering from violence around the world.

Cultural Conversation in Pilsen took place at the National Museum of Mexican Art and opened with a viewing of the special installation of the artist JR’s living mural “The Gun Chronicles: A Story of America”  Click here to see the story 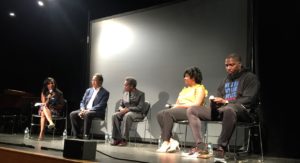 Teen artist Hailey Love shared a memory of her and her friends being racially profiled which illustrated how she feels that, as she puts it, “it is illegal to be a teen of color in Chicago.” Mayor Lightfoot responded that “we need to have an honest conversation about race… to not treat youth of color as enemies and let the youth feel ownership of their own neighborhoods.” She continued: “We have to let young people feel a sense of connectivity to something that is bigger, more important and valuable and gives them nourishment.” She asked the question: “How do we reach young people and let them know that their lives matter?”

With regards to that question activist Jahmal 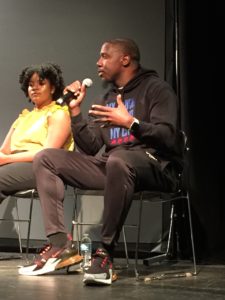 Cole shared about an organization he leads called My Block My Hood My City. He explained how the organization mentors youth to lead tours throughout the city. One benefit he shared is that they have been able to bring together business leaders and owners with young people to stimulate their imaginations while allowing both parties to “see the city and it’s youth through an asset based lens rather than through a liability based lens.” My Block My Hood My City serves as a vessel to introduce people to places in their own city that they’ve never seen or experienced. Jahmal shared the quote “The highest level of maturity is to take full responsibility for your actions” from one of his mentors and implored us to reflect on it at the level of society as well as at the personal level. Mr. Ma said that “although the currency of weapons is fear, the currency of culture is trust.” He said that imagination can be taught by doing what Jahmal does…giving experiences to people. You start to build imagination when you begin to become curious. You begin to imagine, artificially, different experiences on top of each other…(i.e.) oh I like this place…How did this place get built?  Everybody has access to imagination.”

One of the most powerful moments in the discussion came when Mr. Ma shared a short video clip of the Concert for Peace which he helped to organize last year at St. Sabina Church in the Englewood neighborhood on Chicago’s violence ravaged south side. Prior to showing the clip he said:  “ I’m 63 and one of the biggest, longstanding questions that I’ve always asked my self is “what’s the use of what I do?” “I question that EVERY SINGLE DAY.” “I’m not one of those people who says “oh you need to listen to me”. I have to find the purpose.” 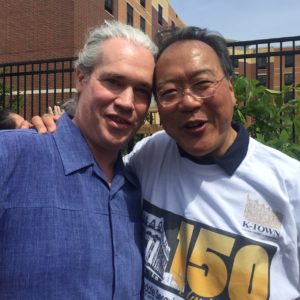 The music in the Concert for Peace was created in collaboration between musical arrangers, players from the Chicago youth Civic Orchestra and parents of youth who were killed by gun violence. The program contained the favorite songs of the deceased and their poetry set to music. Mr. Ma explained: “We were honoring the lives of people that are no longer with us. (we created) A place to heal and to find purpose.” The panel discussion ended with Yo-Yo Ma performing a touching rendition of John Lennon’s “Imagine”.

In the “Day of Conversation and Action” Yo-Yo Ma who, having delighted countless millions while performing on every continent, and having recorded virtually all music known to be created for cello; having performed for eight American presidents in the course of his storied career and being inarguably one of the most celebrated musicians of all time, humbly models for us the philosophy for music and life that he discovered as a teen in the memoirs of his musical hero Pablo Casals. “I am a human being first, a musician second, and a cellist third.”

(ICAP offers its heartfelt appreciation to Marcus Dunleavy for the article and photographs.)