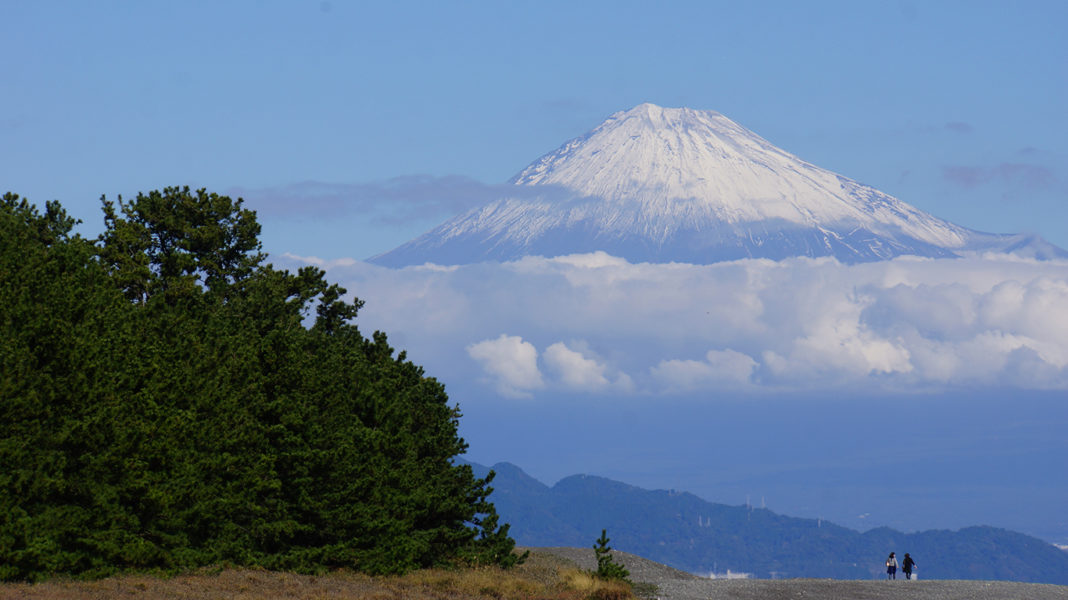 At one entrance to the Miho Pine Grove—which, in 2013, made it onto the UNESCO World Heritage List as part of Japan’s Fujisan (Mount Fuji) Cultural Site—there stands a statue of an ancient farmer. The farmer, Hakuryo, a character in an age-old Japanese mythological tale called “Hagoromo,” watches the dance of a celestial maiden (or angel). Hakuryo is entranced by the angel’s beauty and steals her feathered garment, which she hangs upon a tree branch in order to bathe in the seductively beautiful waters adjacent to the grove.

Miho-no-Matsubara, as it’s known in Japan, comprises some 54,000 pine trees, whose greenery graces a beach expanse of almost four and a half miles on the eastern side of Miho Peninsula (Shizuoka city). Artists of various genres have been inspired over the centuries by nature’s lovely palette here—the white sands, the emerald foliage, the white waves standing out in relief against the blue ocean, and majestic Mount Fuji soaring in the background. Early references to the locale can be found in the Man’yoshu (Japan’s oldest collection of poetry, which began compilation in the year 759). 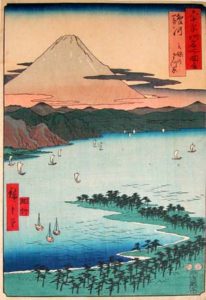 The long-iconic panorama was selected as one of the best Three Views of Japan and used as inspiration by the great 19th-Century master of ukiyo-e, the Japanese wood-block print medium, Hiroshige Utagawa.

In the Hagoromo story, in exchange for the farmer giving back the angel’s clothes, he demands that she show him a heavenly dance. Because the angel would have been refused a return to heaven without her feathered garment, she was compelled to agree with Hakuryo’s ultimatum. After performing her dance in the spring twilight, the angel returned to heaven in the light of the full moon as the wistful Hakuryo sadly watched her depart.

The Miho shrine nearby allegedly preserves a piece of the celestial maiden’s plumage. In the pine grove, there is an actual tree—called the “Hagoromo-no-Matsu”—which is said to be the one upon which the angel had hung her garment. Today, this Japanese black pine is nearly 650 years old, and its branches spread in four directions.

On the second Saturday and Sunday of October, the city of Shizuoka holds a Hagoromo Festival near the site of the old pine tree, and the highlight of the festival is a Noh play version of the Hagoromo story, which is performed by firelight. 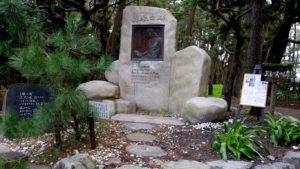 The celebration also features dances by and in the spirit of an early-20th-Century French ballet dancer named Hélène Giuglaris. Ms. Giuglaris, who died in 1951 at only 35, had so been touched by the story told through the Noh play that she produced a dance work titled “Hagoromo.” It was her dream to visit Miho Pine Grove some day, but she fell ill and never made it. Four months after her passing, her husband, Marcel Giuglaris, came to the grove bearing a lock of her hair, her dance costume, and some poetry he had written to his lost love. Today, overlooking the pine tree and the sea is a monument to Giuglaris, and, according to her dying request, her hair lock was placed inside this monument. The memorial depicts a figure of Giuglaris holding a Noh mask, and below is inscribed the poem written by her husband.

The wind of Miho’s
Breaking waves
Speaks of She in Paris
Whose life Hagoromo took away,
If I listen, my days
Will take flight.

The story of Hagoromo:

In ancient times, in Miho in Suruga, there lived a fisherman named Hakuryo. One spring morning he went to the beach. “What a great view!” he said. The sky had completely changed to lovely spring colors. He stopped and looked out over the open sea and sky enjoying the calm spring breeze.

Suddenly, flowers of many colors, a faint fragrance and unfamiliar sounds were all around Hakuryo. Surprised, he looked around, and became aware of a long shiny cloth draped over a pine tree bough nearby. 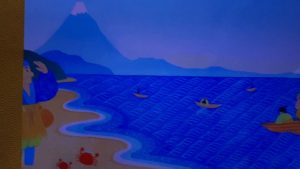 “What a beautiful cloth! I’ll take it home and it will be a family treasure,” he thought. While he gazed intently at the mysterious cloth, he heard a voice from afar say, “Excuse me, Sir, that is my cloth. Please give it back to me.”

So he looked back…and saw a radiantly beautiful woman. “That’s Hagoromo of Heaven, which a human must not touch. Please return it to me,” she begged. He exclaimed, “What? Did you say Hagoromo of Heaven? You must be a heavenly maiden!” Hakuryo was surprised and stared at her. He said, “I see. If that’s true, the cloth is too precious to return. I’ll make it a national treasure of Suruga.”

“Please don’t say that. Please give my Hagoromo back to me. Without it, I can’t return to heaven,” she said. He watched her eager begging and became convinced he had become greater than the heavenly maiden. “I was born a rugged fisherman who is not bound by morals. I will never return it,” he said. 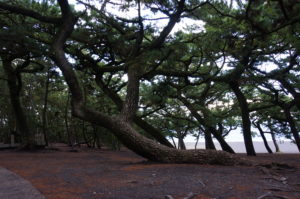 When she realized how stubborn Hakuryo was, She started sobbing and said, “I don’t know what to do.” The flower decorating her hair was slowly wilting and withering. In the distance she heard the honking of wild geese flying home. “Their voices remind me of the birds of my native land. Like them, I want to return home,” she said.

Hakuryo walked closer and said, “Your sad appearance seems so miserable – it makes me sorrowful too. I have decided to return Hagoromo to you.” “I’m so relieved! Would you give it back to me please?” she asked. “Of course,” he stated. “But first, please show me your heavenly dance.” “All right. If I must, I will,” she said. “But I need Hagoromo to dance. Please give it to me.”

Doubting her, Hakuryo said, “How can I believe you? If you get it back, you’ll just go home. You can’t fool me.” She declared, “Only human beings tell lies. In heaven, lies don’t exist.” Hakuryo realized how pure she was and he blushed. He said, “Oh no, I am ashamed and sorry I called you a liar. I’ll give Hagoromo back to you.” 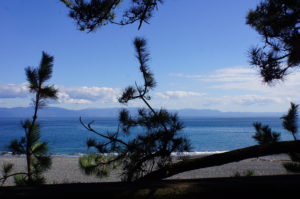 “Thank you very much,” she said. “I’ll tell you a little about where I come from as a token of my gratitude.” She swirled the cloth as she danced, speaking about heaven. “In the remote past, when gods named Izanagi and Izanami made Japan, they named the endless beautiful sky ‘Hisakata no Ame.’ The endlessly extending blue sky they created still remains to this day.” “Beyond the sky, there is the palace of the moon where I live.” She continued.

“In the palace, there are 15 maidens who wear white clothes and 15 maidens who wear black clothes. Every night, the maidens take turns serving the king of the moon. The colors of their clothes make the moon wax and wane. I’m one of these maidens,” she explained.

After she finished her story, the maiden soared up into the sky and looked around at the scenery of Miho. The sea extended endlessly. The mist hung on the sky like the blossoming flowers of the katura tree in the lunar world. The pine tree’s branches were swinging and Mt. Fuji was dyed red by the sunset and rose into the sky like Shumisen.

“Oh, I’ve only thought about going back to heaven, but what a lovely view of Miho,” she said. “Here, there’s no difference between earth and heaven.” The maiden danced and sang with all her heart. A flute and koto beautifully accompanied her singing. Where they stood grew bright like heaven. The maiden’s kimono grew radiant with the changing colors of cloud, sky and mist. 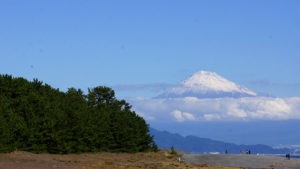 Absorbed in the song, they didn’t notice that the sky had already grown dark. The maiden united with the moonlight as if she were the moon itself. “May gods and Buddha shield Japan as the moonlight surrounds the earth,” she said. After she said that, she showered a lot of jewels on the earth, wishing the country eternal glory.

The view made Hakuryo fold his hands and he sighed, “How beautiful!” The maiden wistfully flew around Miho, streaming her cloth in the wind. “Farewell, Miho,” she said.

Then the maiden flew to Mt. Ashitaka and then to the top of Mt. Fuji. Finally she disappeared into the sky. The magnificent dance the maiden performed was passed down through the generations as Suruga-Mai.