Home Uncategorized iChoose reaches out to schools in Manhattan, Queens, the Bronx and northern... 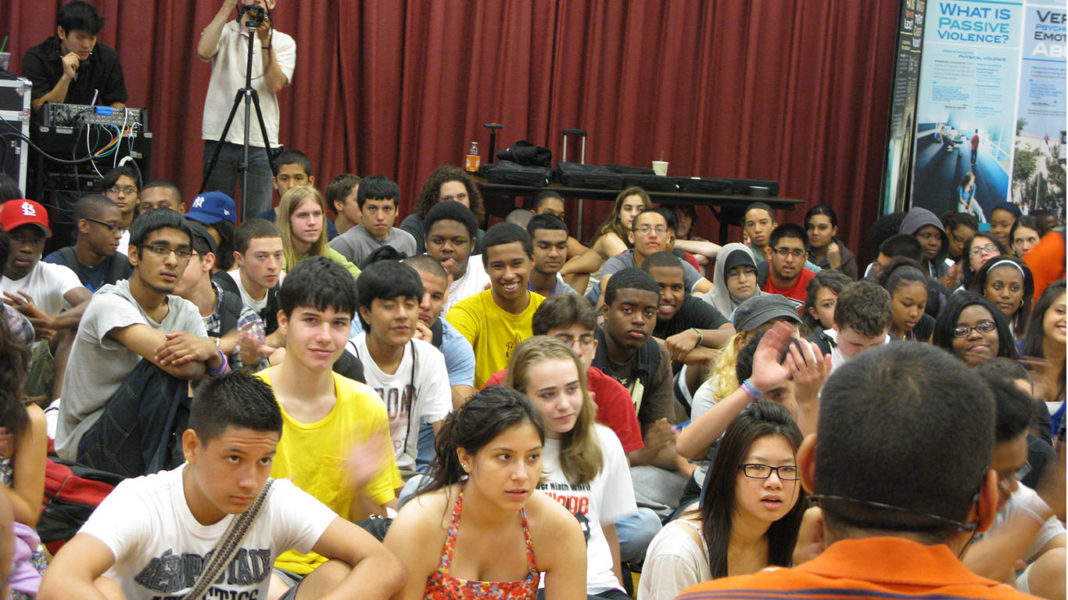 The latest incarnation of iChoose continued its tour of the New York area, stopping at schools in Manhattan, Queens, the Bronx and Englewood, New Jersey. The three-part iChoose program—designed to empower young people to find alternatives to violence as a means of conflict resolution—incorporates a mini-musical, a Victory Over Violence exhibition, and a post-performance dialogue session led by cast members.

On June 3, iChoose visited Manhattan’s Gregorio Luperon High School for Science and Mathematics. More than 200 students, many of whom are of Dominican Republic descent, participated in the talkback discussion. The students let out a joyful roar when iChoose cast member Jeffrey Nuñez introduced himself in Spanish and asked, “Where are my Dominican friends?”

Principal Juan Villar commented: “I am speechless. It was fantastic. Ms. Queen (the faculty member who suggested the iChoose visit) deserves 100 percent of the credit for today’s event. When she first proposed we host the program, we said, ‘It’s the end of the year! Final exams, regents examinations! We cannot do this! But, she insisted. So: I went. I saw it. And, indeed, she was right.”

On June 4, Renaissance Charter School in Jackson Heights, Queens, hosted iChoose. The performance was attended by 300 enthusiastic students. During the talkback session, an iChoose staff member asked a student, Juan, what he wanted to be when he grew up. Juan replied he wants to become a narcotics officer, in order to take drugs off the streets because that was the reason his father had been sent to prison. At the end of the session four students volunteered to read the VOV pledge for nonviolence which brought thunderous cheers from the students. They are:

I will value my own life. Today, again, I will reach beyond my doubts, taking concrete steps to uncover my unlimited potential. Recognizing that a lack of self-identity and hope for the future are at the root of all violence, I will fight to realize my dreams, even if they seem impossible.

I will respect all life. Through understanding, tolerance and respect for diversity, I will see beyond superficial differences. I will awaken to a deeper sense of interconnectedness with those around me by reflecting on the common humanity I share with all people.

I will actively pursue dialogue. With care and consideration for the dignity inherent in others, I will make continual efforts to reach out to people each day, especially those different from myself. Through genuine friendship, I will break through feelings of isolation and hopelessness that can lead to acts of violence.

I will inspire hope in others. With courage, I will resolutely stand up against violence, be it passive or physical and teach others through my own example. I will support others and encourage them to follow their dreams.

Everett Boyd, a music/special education teacher, said, “This kind of a program can really change an individual’s life.”

According to José Mane, a 9th-grade humanities teacher: “It’s good to see students get involved in an interactive situation in which they can explore bullying and violence. The musical part was excellent—a great vehicle for them to deliver the message of nonviolence.”

Ninth-grader Andrew Nicolas said: “So now if I see something, I’ll know how to treat the situation at hand, and show other people what to do as well. I enjoyed the performance. It helped me soak in the message more, because I’m not a person that’ll just sit there and listen to lectures.”

Alina Krischanovich, an 11th-grade student, said: “To be honest, I thought it was going to be something boring, that I wasn’t going to enjoy it. But it was really great, and it definitely hit on a topic that speaks to everyone in the audience.”

Celestial-Jewtl Joseph, a 10th-grader, said: “The situations in the play were real, they weren’t made up. People actually do things like that in real life. I liked the program because it teaches people how to overcome challenges and conflict in their lives without using violence.”

On June 8, 600 students at the FORWARD School of Creating Writing in the Bronx turned out to see the iChoose program. After the show, talkback sessions were held in 15 separate classrooms, with each discussion led by a cast member ably assisted by volunteer youth. Cast members remarked on the eagerness of the students’ comments, as well as the vibrancy in their eyes, perhaps reflecting a new resolve to think critically about their daily circumstances. Educator and author Monte Joffee joined in on one of the discussions, asking the students about the type of inner dialogue they may undergo when confronting challenges.

Adrienne Phifer, FORWARD principal, said: “I’m really happy that iChoose chose us, and we thank Mr. Herbie Hancock and the entire iChoose group for the excellent program. It’s a really nice way to send the children off for the school year, and for my eighth graders, to send them off to high school, because they will be faced with these choices. In fact, they are faced with them on a daily basis. It’s all about planting a seed that you can make a choice, that you can do something different, even if it’s just speaking out. It’s important that the children understand that the choice is always theirs.”

Teacher Danielle Berl said: “I really enjoyed how they mixed different media together. Video, dance, poetry, rapping—there was a whole bunch of different things that got the kids engaged. It opened up an avenue of different ideas and let the kids explore those ideas individually. The breakout sessions went really well because kids got to talk to each other. I think if we had a big group session they wouldn’t have been as open or as honest because too many people might be judging what they were saying. The small group made a big impact.”

On June 9, Frank Sinatra School of the Arts High School in Astoria, Queens, hosted the iChoose program with 200 students in attendance. Everyone from the security and janitorial staffs, to the teachers and administration gave a warm welcome to the iChoose team to their sparkling facility. After the well-received performance, students had an opportunity to view the VOV exhibition at length and engage in dialogue with the iChoose cast members.

Principal Donna Finn said: “The program will have an impact on our students. (Music legend) Tony Bennett is the founder of the school, and we are very much in tune with the need for education on nonviolence. It’s wonderful to have a performance like this, where freshmen new to our culture can attend, and get that additional support for the message about bullying and name-calling and violence, particularly in this age of electronic communication.

Yoshivel Chirinof, a 9th-grade student, said: “I liked the overall production, and I really appreciated the personal accounts that the actors gave, which helped you could get a better understanding of the message.”

Ninth-grader Johanna Tan said: “I, too, liked hearing their life experiences. I think it’s a really good influence for us viewers, to know that we can talk about our problems and come to understand one another. The musical part was especially good. It helped us feel more like, O.K., we can do this stuff.”

Jeff Forman, an 8th-grade activities director, commented: “Everyone was enthusiastic about this non-lecturing way of presenting your message. Our kids, sometimes, can get a little overenthusiastic, but they enjoyed the show.”

Seventh-grader John Robinson said: “By using entertainment, this teaches children how to confront violence in a way they can understand, because most things kids hear goes in one ear and comes out the other. Entertainment and songs help them retain it. And seeing other people’s experiences helps them learn to get away from the violence and to be their own person.

Fellow 7th-grader Johnny Holloway, echoed those sentiments: “I think it was great, a lot better than when people just say, ‘Stop being violent, stop doing this, stop doing that.’ Rather than giving a lecture, you guys added something that kids need more these days, a little bit of entertainment to it.”