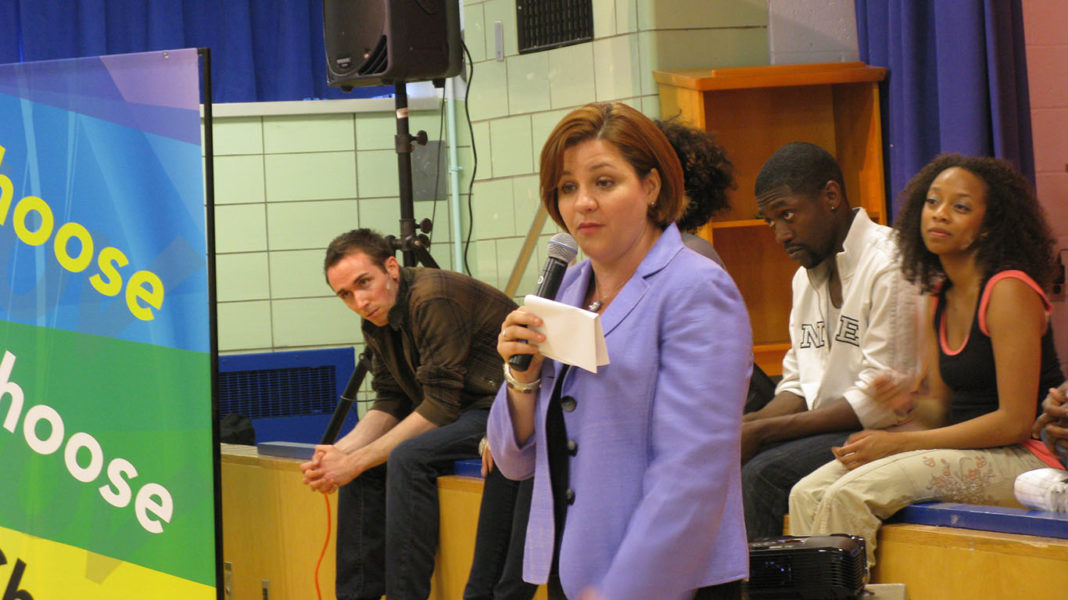 For the final leg of the iChoose New York-area tour, New York City Council speaker Christine Quinn joined the crowd of 400 students at PS/MS 212, the Multicultural Magnet School in the Bronx, for the performance on June 14. 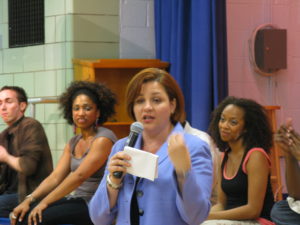 “I want to thank everyone at this school for this iChoose production,” said Speaker Quinn. “I want to thank my neighbor Paula, who invited me here today, and for being a good advocate for what you believe in. Thank you to the cast for such a wonderful performance and thank you to everyone who is a part of ICAP.”

Ms. Quinn continued: “Sometimes bullying may seem like nothing at all, but if you let it happen, people start thinking that its O.K. Then crime escalates and serious things happen … today’s production has come about at a significant time…”

Students were fully engaged in the ensuing post-performance talkback sessions, paying special attention to the iChoose cast members’ accounts of their personal experiences. Cast member Shareen Macklin, was asked to sing a song. And students sang along as Shareen gave a spontaneous rendition of the Alicia Keys hit “If I Ain’t Got You.”

A student named Andre reciprocated by singing “Lean On Me.” It was particularly touching when everyone joined in on this song, creating a deep impromptu ceremony of humanity and an exchange of genuine friendship.

School Principal Yohan Lim, said: “It may be a cliché that ‘one person can make a change,’ but you can see in the [VOV exhibit] panels that it actually does take one person to change history … The show was very real—it wasn’t cliché. The performances were excellent. Thank you to ICAP for coming to visit us. I hope to see you more often.”

Kim Larock, dean of students, said: “Our kids respond very well to music, theater and dance. All of that helped the message we’ve been sending them all year sink in even more. I know there are couple of students here today who happen to be some of our biggest behavior problems, and they are excited about the program and want to get involved.”

On June 11, the iChoose team visited Eastside High School, in Paterson, New Jersey. This school was the site of the 1989 movie Lean on Me, starring Morgan Freeman. More than 1000 students erupted in applause after the show’s opening number, “Respect Me.”

After the show, Principal Karen Johnson asked the students to do their Eastside High cheer, and the students cheered as loud as they could. It was a sudden, beautiful exchange of mutual respect and appreciation. 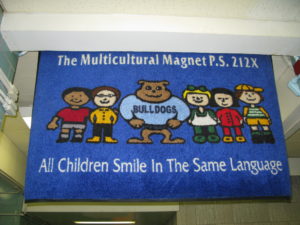 Paterson Mayor Joey Torres attended the presentation. Afterwards, he made the following comments: “Today, most of our messages are sent through the arts. Our young people, who are most vulnerable to violence, can communicate through the arts. And having these iChoose performers sending them the message of Victory Over Violence was very effective … Each and every one of us can be a contributing factor in moving our nation toward peace.”

Principal Johnson said: “I really didn’t know what to expect initially, but from my 33 years working in high school, I can say this was an outstanding performance. Your message was clear, the students were engaged, and they were on the edge of their seats. It was very professional. I’m very excited and thrilled to have participated in this presentation.” 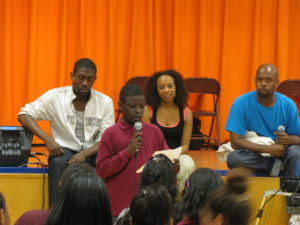 Eleventh-grader Mariah Morris said: “I definitely liked the show; it was awesome! I’m in the choir and drama, and I love to see stuff like this, especially when it sends message to our fellow peers, because we need to understand each other. As many people don’t.”

Irma Gorham, an eleventh-grade student, said: “Sometimes it’s so hard for students to listen. Today, however, it was very quiet in here. When it was time to cheer, they cheered; when something connected with their lives, they responded. Today was a great way for them to see and hear another perspective on violence and their lives. We look forward to many more productions of iChoose.”

The iChoose program completed a tour of 10 New York and New Jersey high/middle schools on June 14. The schools visited were: