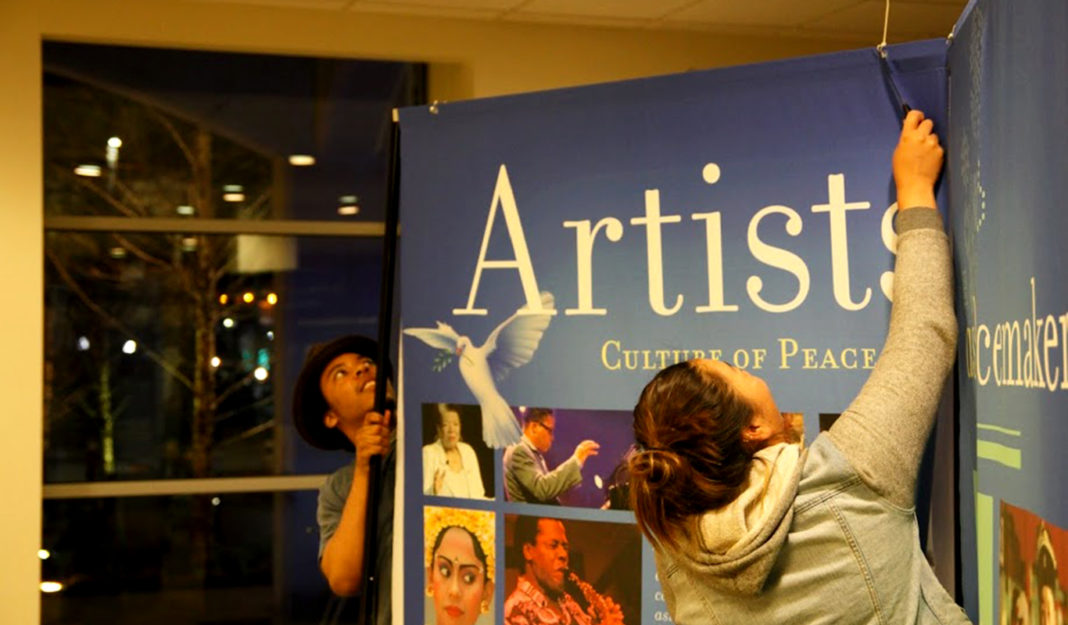 â€œArtists as Peacemakersâ€ â€” ICAPâ€™s exhibition that highlights its core value, establishing a peaceful world through the power of the arts â€” https://icapeace.org/icap/exhibits/ArtistsAsPeacemakers-Web-Dec07.pdf

was hosted on the campus of Point Park University in Downtown Pittsburgh, April 6â€“10.

The following article from the The Globe, the universityâ€™s independent student newspaper, details the exhibitionâ€™s run at the school:

Point Park students, regardless of their major, will have the opportunity to present their poetry, perform original music or dance pieces and display the full range of their creativity this week. This is part of the [ICAPâ€™s] traveling art exhibit â€œArtists as Peacemakers,â€ occupying Village Park from April 6-10.

The exhibitâ€™s arrival on campus is the result of the partnership between student club, Soka Gakkai International – Point Park University (SGI-PPU) and The Campus Activities Board (CAB).

Karen Mao, CABâ€™s Community Service Coordination, said when SGI-PPU club president Gabriel Colombo reached out to CAB for support in bringing â€œArtists as Peacemakersâ€ to campus, she was enthusiastic about bringing the larger mission of involving student participation in promoting peace.

â€œWe want to let students know that they could be a part of this huge movementâ€¦ itâ€™s not just a passive art exhibit,â€ Mao said Thursday in Lawrence Hall.

According to Colombo, SGI is a Buddhist organization that interacts within society, guided by the principles of peace, culture and education, whose main focus is peaceful society. In support of these guiding principles, SGI provides exhibits that can be requested by its members for display at educational institutions and cultural events and programs worldwide.

â€œâ€˜Artist as Peacemakersâ€™ is an exhibit that questions and reflects the artistsâ€™ responsibility in their social medium and how the artist can influence society with their powerful tool called art,â€ Colombo said Thursday in Academic Hall. â€œThen we came up with this idea. Since we are bringing an exhibit to Point Park that is about art, and Point Park is such a diverse place of different artists, why not invite those artists to perform?â€

Students who want to participate in this event should frame their work around the question: â€œWhat does it mean to be a Peacemaker Artist in our society?â€ Any creative contributions pertinent to this theme, from dance to spoken word, photography, painting, music or short film, are welcome.

â€œThere is no due date for submissions so we are actively looking for artists up until the date that exhibit closes,â€ CAB Public Relations and Marketing Coordinator Colten Gill said Thursday in the Student Center.

Both SGI-PPU and CAB are actively engaged in making students aware of the exhibit and seeking student participation.

Finding and securing a space large enough to display the exhibit and support the expanded vision of the creative contributions of students presented a challenge.

â€œItâ€™s a really busy season right now for conference and eventsâ€¦initially, we were hoping to have the event for 10 days, but due to the low availability because of all of the events, we can only do it from the sixth to the 10th [of April],â€ Mao said.

The â€œArtists as Peacemakersâ€ event ran from 9 a.m. until 9 p.m. in Village Park with an alternate location of Boulevard Lobby. Performances are scheduled from 6 p.m. until 9 p.m. and featured an open mic for impromptu participants, according to Colombo, who studies cinema and plays the Afro- Brazilian drum and will perform during the week-long event.

â€œI think the drum is, for me, the rootsÂ of humankind; that connection on the most basic level; you donâ€™t need to know how to speak a manâ€™s language to understand that your pulse is the same as the drum,â€ Colombo said. When I came to the U.S., I didnâ€™t know how to speak English, but I knew how to play and, the friends that I made [were] through musicâ€¦and even though I could not communicate, we could play music together.â€

Alexandria Bright, senior dance major, performed improvisational dance this week also experienced her connection to others most profoundly through her art form.

â€œItâ€™s like a soul connection when I am improvising with [other] dancers and musicians,â€ Bright said Thursday in Lawrence Hall. â€œI feel like the connection with the environment and to other people completely influences how I am going to be moving. I just let the music guide me. I love improvising with live musicians because the energy is so intense.â€

Colomboâ€™s hope for this event is that his fellow artists and students will gather, share their ideas and find inspiration.

â€œHow can you be an artist if you donâ€™t interact with your environment; if you donâ€™t understand people around you?â€ Colombo asked. “Everyone has this inner potential so everyone can tap into that to express that. It doesnâ€™t matter who you are, where you come from, your background or if you are Buddhist or not. Everybody has that [potential] so thatâ€™s why we invite people to bring their art and interactâ€¦because nobody interacts here.â€Â Colombo said that he also hopes that this event will inspire students to reflect on what it means to be an artist and how to create works not only for personal benefit, but for the benefit of others as well.

Mao said before she worked on this event, she normally would have thought of a peacemaker as a Nobel Prize winning speaker. Now, she thinks that people who would not normally be seen as peacemakers have an opportunity to show how they can contribute with their specific talent.

â€œIt made me think; Iâ€™m not an artist but what if? And art is so flexible, what if you considered softball an art? And how could I use that to bring peace? It made me think of coaching softballâ€¦having an impact on younger players who could be better people because of your impact on them,â€ Mao said.

(ICAPÂ thanks The Globe and editor Angela Woodard for permission to reprint this article from their April 7, 2015, issue.)