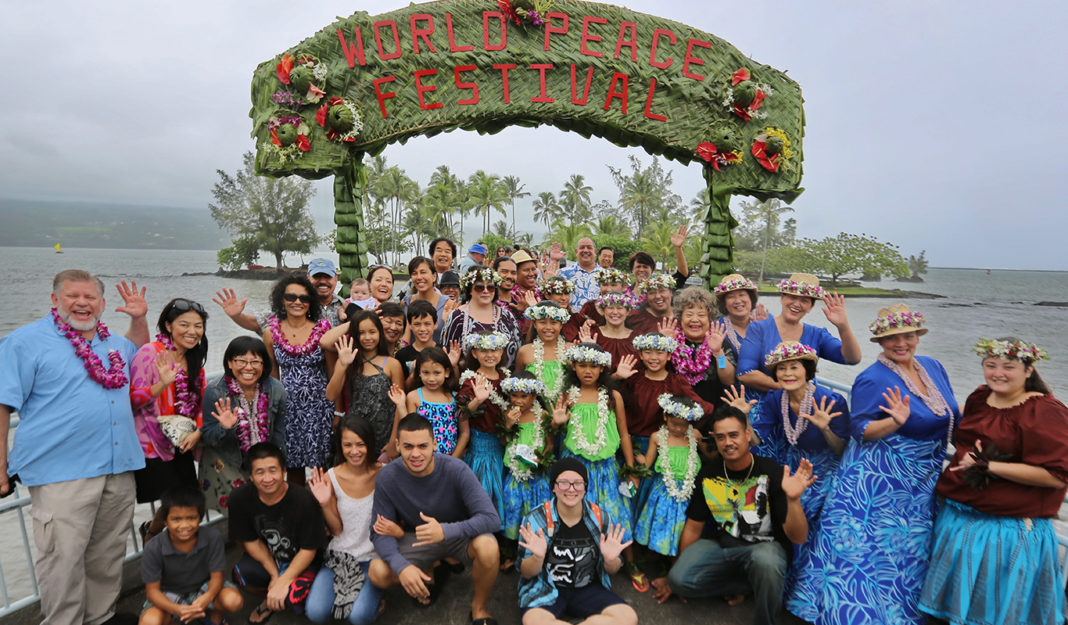 Promoting the â€œspirit of Alohaâ€ and â€œcultural diversity for the creation of a peaceful world,â€ the citizens of the Big Island of Hawaii came together for the 6th Annual Hilo World Peace Festival on October 3.

The grand eventâ€”resulting from a partnership among Hawaii County, SGI-USA, the International Committee of Artists for Peace, Destination Hilo and the Hawaii Youth Exchangeâ€”was held at Moku Ola (Coconut Island), a small body of land, situated in Hilo Bay off the Liliuokalani Park. Moku Ola is Hawaiian for â€œIsland of Lifeâ€ or â€œhealing island,â€ and since ancient times, Moku Ola has served as a safe haven, a place for healing and refuge.

According to Roxcie L. Waltjen, Culture Education Administrator for the County of Hawaii, this yearâ€™s festival was â€œa true partnership event, where community organizations, private enterprise and government work together toward a common goal.â€

The festival is the brainchild of Mayor Billy Kenoi, who created it â€œto promote the spirit of aloha, the universal language of love, which means: to honor and revere our elders; to love, nurture and protect our children; and to respect the harmony of our families, thus creating a healthy community and island.â€ Once again this year, Mayor Kenoi was the driving force behind the event, which he initiated five years ago after learning of Dr. Daisaku Ikedaâ€™s worldwide travels for peace. Dr. Ikedaâ€™s initial journey began on Oct. 2, 1960, in Hawaii, and today, Oct. 2 is celebrated as â€œWorld Peace Day.â€ Accordingly, this international cultural event is held on Hilo each year on the first Saturday of October.

In his official welcome this year, Mayor Kanoi spoke of the virtues of the event in light of the intensity of daily life on the Big Island: â€œEvery year, we celebrate something very simpleâ€”we call it a peace festival but in Hawaii, peace is the same as â€œaloha.â€Â We celebrate leaders, such as Daisaku Ikeda, Dr. Martin Luther King Jr, Mahatma Gandhi, all those who lead with love and aloha, leaders who have the vision, the compassion, the capacity for peace to share a vision that everybody can understand, and support, and live every day.

He continued: â€œI also want to thank and [express the spirit of] aloha to the humble, quiet folks we never hear about . . . who are out there championing peace every day; our coaches and teachers who work with our youth, who instill in them the values of love and aloha and kindness. I met a woman whose granddaughter plays volleyball at the college in Oregon where nine innocent students were recently killed. This woman told me how the coach grabbed all the girls and got â€™em out of there.â€

Wrapping up his remarks, the mayor expressed his appreciation to all the behind-the-scenes support personnel, who contributed greatly to beautifying the bridge to the island and the rest of the venue with an abundance of flowers.

Ihilani Miyasato said: â€œI have been practicing hula dance with the group for the last two and a half months. I have enjoyed it very much, and I want to continue, because they have become such good friends.â€