“Ladies and gentlemen, in recognition of his outstanding contribution to [the goals of our core mission—bringing cultures together, and protecting the rights and dignity of every individual], I am honored to designate Mr. Herbie Hancock as UNESCO Goodwill Ambassador for Culture, for the promotion of intercultural dialogue.” 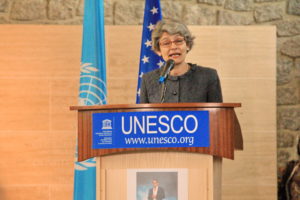 With these words, from United Nations Educational, Scientific, and Cultural Organization Director-General Irina Bokova, jazz icon and ICAP co-president Herbie Hancock was officially inducted on July 22 at the UNESCO headquarters in Paris.

Mr. Hancock now belongs to what UNESCO describes as “an outstanding group of celebrity advocates who have generously accepted to use their talent and status to help focus the world’s attention on the objectives and aims of UNESCO’s work in its fields of competence: education, culture, science, communication and information.” (See www.unesco.org.)

Singling him out as “one of the founders of modern music, starting with classical jazz, moving to jazz fusion and R&B, and then on to hip-hop and dance music,” Ms. Bokova said that Herbie Hancock’s “ability to look across the frontiers between genres, and [his] constant urge to innovate, have influenced generations of musicians and touched countless hearts.” 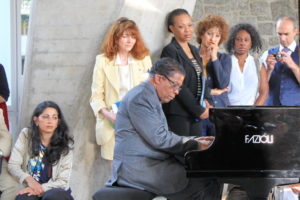 “Your music is imbued with the spirit of freedom,” she said. “This is the freedom that comes from recognizing boundaries—accepting obstacles for what they are—but always seeking to transcend them. This is the freedom driven by responsibility, that connects people, that brings traditions together, that strengthens the ties between all of us.”

Ms. Bokova explained that it is this spirit that inspired Mr. Hancock to help establish ICAP along with its founder, Dr. Daisaku Ikeda, and others, stating: “ICAP brings together dedicated artists from around the world with the goal to establish peace and develop peacemakers through the transformative power of art. What a wonderful message for all of us here at UNESCO! ICAP teaches and educates young people. [And ICAP’s various educational and cultural initiatives serve to] reconnect people with their humanity and to create a movement for peace, for culture and for education . . . You have shown art to be a powerful universal language, linking peoples and cultures. 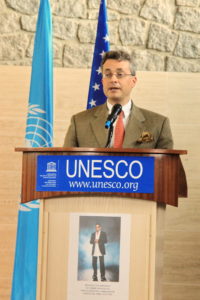 To spirited applause, Herbie Hancock then took the podium. After thanking his hosts for their kind remarks, he shared with the audience his profound appreciation for the three important women in his life: his daughter, Jessica; his wife, Gigi; and his co-manager, Melinda Murphy.

In his remarks, Mr. Hancock said: “I can’t imagine a world without music, without dance, without art, film, theater, without books—that would be a very dreary, bland and colorless existence; a world with little cooperation and communication among its citizens. The arts are the glue that holds us together, the cultural fabric of our lives . . . We know that the creative mind can solve pretty much anything, which is a very important skill in today’s challenging times. UNESCO is essential to insuring that our world remains soulful, spirited and full of life. I have an intense desire to support, sustain and insure its vibrant mission.”

Citing the resilience of New Orleans residents, especially a band of young musicians who stood up to encourage their community in the aftermath of Hurricane Katrina, Mr. Hancock spoke about Nichiren, the 13th-century Buddhist reformer, who taught that a person who falls to the ground can then use the ground to get back up again.

“We face considerable problems and innumerable challenges in today’s world,” he said. “It’s easy to lose the faith and confidence we need to emerge victorious. However, we must capitalize on our weaknesses and use them as our springboard to get back up again, to become stronger and more humane. 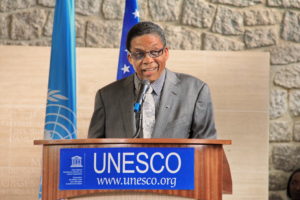 “As a Goodwill Ambassador, I’m interested in exploring themes concerning our global lives, the role of young people to initiate and cause substantive transformation, the capacity of technology to make deep-rooted changes in developing nations . . . and promoting dialogue and compassion across borders . . . People need to know that we have much more in common with one another than our differences.”

As part of his UNESCO mission, Mr. Hancock expressed his desire to help make an annual International Day of Jazz a reality “because it would foster and strengthen communication and partnerships among disparate groups.” Accordingly, he said he also hopes to establish jazz music as an “intangible cultural heritage” of UNESCO, and that he would work to get UNESCO World Heritage site recognition of New Orleans, his hometown of Chicago, and Dockery Farms in the Mississippi Delta—a plantation community that gave birth to the blues.

Having expressed a determination to “make a conscious effort to embrace the ideology and ethos of UNESCO on a daily basis, through my music, my work mentoring young students throughout the world, my faith in and practice of [Nichiren] Buddhism, or as an international advocate for peace,” Mr. Hancock concluded by saying: “I’m just excited about each day and the possibility of what I might be able to do. This new role gives me a new lease on life. It’s making me feel younger. I’ve just started.” 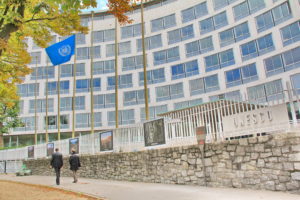 ICAP founder Daisaku Ikeda, who had to decline an invitation to the ceremony due to prior commitments, sent a message stating: “Mr. Hancock will make an outstanding Goodwill Ambassador for UNESCO. His many, ongoing efforts to advance the causes for peace and culture should prove to be of immense value to the organization, inspiring even greater and more creative contributions in carrying out its hallowed mission and activities.”