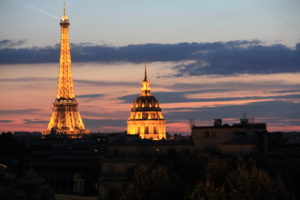 It was the first of a series of celebrations to be held around the globe in 2012, culminating with a final event this November in Kyoto, Japan. UNESCO World Heritage sites are locations of cultural significance that are recognized and supported by the international World Heritage Programme administered by a division of UNESCO. With 188 States Parties (participating nations and territories), the World Heritage Convention is, according to the UNESCO website, “one of the most widely ratified international agreements.” At present, 936 properties in 153 nations have been officially listed by the Programme. 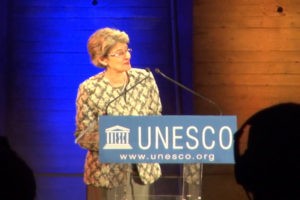 In her remarks, Director-General Bokova shared her delight at how the idea of international sharing of responsibility and expertise at the service of safeguarding the natural and cultural heritage of humanity, which began in the 1970s as merely “a dream,” has today become a “beautiful adventure.”

“[World Heritage] is neither a beauty contest, nor a race among countries for the greatest number of sites,” she explained. “It is a source of energy that is endlessly renewable. It is a foundation of wisdom and knowledge upon which to build a better future . . . It is a dream of humanity united in its great diversity.”

Ms. Bokova expressed her joy at having Mr. Hancock as UNESCO ambassador, referring to him as “a man of great passion and principles who will show us how much the World Heritage rocks.” 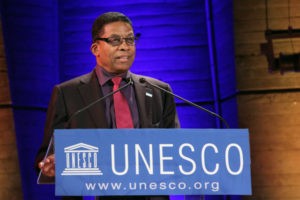 Mr. Hancock then took the podium to recount, via a PowerPoint presentation, his first UNESCO mission, a recent visit to Southeast Asia. He told of witnessing how the establishment of the World Heritage site in that region had not only a cultural impact but an economic one as well, inspiring a vibrant tourism industry that contributed to the prosperity of the local community, the city and the entire country, especially because of the jobs it created in the realm of arts and crafts.

Additionally, Mr. Hancock explained the significance of World Heritage sites in helping to pass down vital cultural history. “World Heritage sites are particularly important in providing a record of the past that would certainly have been lost . . . Knowing about your history—where you come from and what your ancestors have accomplished—has a direct impact on the psyche of a country as well as building a sense of self-worth of a people.”

“UNESCO represents the same ethos that I try to live by. I have been practicing Nichiren Buddhism for 40 years. And the ethos of Buddhism is in harmony with the mission of UNESCO—world peace, culture, education, science and communication. All of these are expressed in Buddhism.” 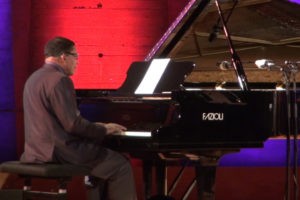 The evening’s centerpiece was a concert that included performances by Mr. Hancock, Corinne Bailey Rae, Manu Katché, Stephen Brown and Esperanza Spalding, who debuted an original song she composed in celebration of heritage.

Although they were unable to attend, Daisaku Ikeda and his wife, Kaneko Ikeda, sent a message conveying their appreciation at having been invited and extending their best hopes and wishes for the great success of the event.