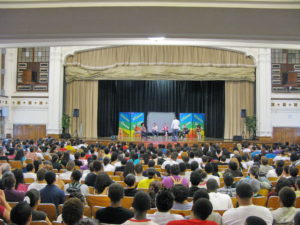 ICAP has planned a new set of tours for iChoose, its innovative anti-bullying project that combines education and entertainment to provide a vital antiviolence message to high school and middle school students. Already, iChoose has had successful runs at schools in Hawaii, Southern California and the New York/New Jersey metro area.

The interactive multimedia production was launched in 2010, in collaboration with Victory Over Violence—a youth-led education and engagement initiative to help young people identify and counteract the root causes of violence. Preparations are now underway to bring the iChoose program to schoolchildren in Europe and Oceania. iChoose will also be returning to the United States, with scheduled runs at schools in the Las Vegas area and Chicago, and a second visit to California. 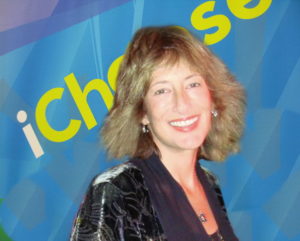 Based on a deep desire to use her artistic training to make a personal contribution toward eliminating bullying in schools, iChoose creator and executive producer M Lavin explained, “The purpose of iChoose is to help students know that there are alternative choices to violence.” Ms. Lavin is also an ICAP vice president.

According to ICAP executive vice president Patrick Duffy: “Educators from the various schools have reported a significant decrease in bullying episodes and violent incidents, and that many students had opened their lives to positive possibilities where before there had been none. Essentially, what we are trying to do is offer the youth in our schools the hope and courage to choose victory over violence.”

The three-part iChoose production takes approximately one class period to complete. After viewing the VOV exhibition—whose major themes include Gandhi’s explication of the relationship between passive and physical violence; the need for each person to take responsibility for violence in his or her environment; and the value of dialogue—students watch the 20-minute iChoose mini-musical in their school theatre or auditorium. The program then concludes with cast and crewmembers facilitating small-group discussions with the students about the ideas with which they’ve just been presented. 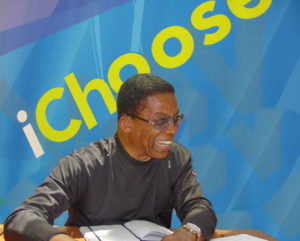 “By comparing the challenges modern teenagers face with the struggles of internationally recognized peacemakers, iChoose helps young people understand the value of choosing nonviolent solutions,” says ICAP co-president Herbie Hancock. “Furthermore, by guiding students to choose thoughts, words and actions that promote hope and dignity for themselves and others, iChoose encourages today’s teenagers to continue the legacy of international leaders for peace.”

VOV began in 1999 in response to the growing concerns over youth-related violence in the United States such as the Columbine shootings in Littleton, Colorado. It has since been presented internationally at more than 100 schools in the United Kingdom, New Zealand and Canada, and more than 1 million people worldwide have signed he VOV Pledge for Nonviolence. Please visit www.vov.com for more information.