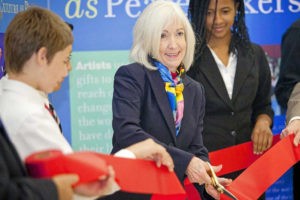 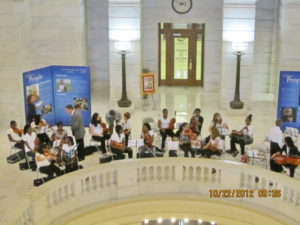 In the beautiful white-marbled rotunda of the Arkansas State Capitol in Little Rock, ICAP’s “Artists As Peacemakers” exhibit went on view October 22–26.

David Ware, Capitol Historian, Arkansas Secretary of State’s Office, welcomed more than 100 people to the exhibit and presented guests, speakers and performances. Fondly recalling being part of ICAP’s “Children Are the Future” exhibit that showed for two weeks in the Rotunda in April-May 2005, Mr. Ware said he was honored to once again host an ICAP exhibit. He noted that the latest exhibition was not only beautifully designed and constructed but it also expressed a most worthy message to the world. Mr. Ware also pointed out that October 24 is United Nations Day, which made the holding of the exhibit at the Capitol now even more significant to Arkansans.

Jerry Matlock, a jazz musician and local artists group representative, introduced the exhibition, noting that as the title implies, artists have unique opportunities to inspire people and use the power of the arts to bring them together.

Brian Saito, an ICAP representative from New Orleans and the event’s keynote speaker, expressed his appreciation to the warm-hearted people of Arkansas for all the assistance they rendered to the citizens of New Orleans during the catastrophic Hurricane Katrina in August 2005. Mr. Saito also thanked the Arkansas Secretary of State’s office and special guest Ginger Beebe, the first lady of Arkansas, for their support of the successful exhibit opening.

A 20-piece orchestra from Little Rock’s Fuller Junior High School, conducted by Joe Vick, performed Pachelbel’s “Canon in D” and “Legend of Dark Mountain” by Soon Hee Newbold. Next, a “Youth Pledge” was read by Joe Howard, political science professor at the University of Central Arkansas in Conway. 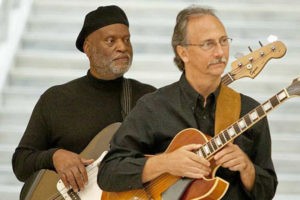 Mrs. Beebe then officiated the ribbon cutting. After the opening ceremony, she toured the exhibit and commented on how appreciative she felt to have been invited. Mrs. Beebe, a champion of children’s health and literacy, noted how encouraging the exhibit was and expressed how grateful she was for all the people working toward a more peaceful world.

After leaving Little Rock the free-standing exhibit was on to it next stop, a showing at the University of Arkansas, Fort Smith, from October 29 through November 2.

(Doris Soenke was responsible for this article and photographs, and for that, as well as the efforts of local volunteers—including Jerry and Kazue Simpson, Scherri Johnson, Lisa Mommsen and many others—ICAP offers its heartfelt thanks.)