April 30, the world took a giant step toward giving the profound art form of jazz its proper recognition, as the United Nations Educational, Scientific and Cultural Organization celebrated the first annual International Jazz Day at the UN General Assembly Hall in New York. 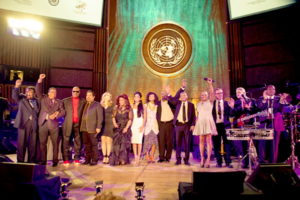 Some 1,500 dignitaries and guests attended the landmark event, having been invited by UNESCO Director-General Irina Bokava; Susan Rice, permanent representative of the United States to the United Nations; and ICAP co-president Herbie Hancock, who is currently a UNESCO Goodwill Ambassador. Daisaku Ikeda, who was unable to attend the festivities, sent a message of congratulations to Mr. Hancock on the realization of his long-cherished dream and extending his best hopes wishes for the great success of the entire celebration.

Festivities kicked off on April 27 at UNESCO Headquarters in Paris with a daylong series of jazz education programs and performances. Then, on the special day itself—April 30—events marking the cultural milestone were held in more than 100 countries, including Australia, Belgium, Brazil, Japan, Algeria, New Guinea and Russia. Here in the United States, in the early morning hours, a sunrise concert was held at Congo Square in New Orleans, an area near the French Quarter neighborhood where African slaves once gathered on Sundays to play music. The pinnacle event in the evening at the UN General Assembly Hall was billed as a sunset concert.

UN Secretary-General Ban Ki-moon addressed the crowd via video message, saying, “Jazz is an American invention that has become part of the world’s global artistic and cultural heritage.” With a sly reference to Miles Davis, he noted the appropriateness of holding the concert at the United Nations by explaining, “after all, the UN flag is kind of blue.” Continuing in that playful vein, he announced that because of the event, “I’m in the mood” to “sing sing sing.” Wrapping up his remarks by saying, “jazz has no boundaries . . . it takes us from April in Paris to autumn in New York, and from a night in Tunisia to Ipanema and Birdland,” the Secretary-General set the tone for the evening: humor, hope, adventure, diversity and inspiration.

Susan Rice spoke about how for many years the United States has been dispatching jazz artists around the world for the purpose of cultural exchange. UNESCO Director-General Irina Bokova praised Herbie Hancock, who made this day possible, and proclaimed, “It is the values of jazz—dialogue, freedom and human dignity—that UNESCO supports . . . and this is the reason UNESCO created the International Jazz Day.” 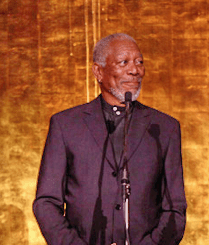 The UN concert was hosted by a series of noted figures from the performing arts—Morgan Freeman, Roberto De Niro, Michael Douglas and Quincy Jones, who said: “Jazz is America’s only true indigenous art form. It’s our classical music. It is the heart and soul of American music, and we can’t afford to let it slip into obscurity.”
Upon taking the podium, Herbie Hancock said: “Standing here tonight is the culmination of my career-long dream for people living on all seven continents to devote one day a year to celebrate the music that has shaped my life . . . Music is powerful. As I travel around the world, I’ve been fortunate to mentor scores of young artists and have witnessed firsthand incredible transformations in mind, body and spirit. Not only does understanding and learning an instrument increase cooperation, self-confidence, intuition and creativity, but developing a love of music inspires and brings entire communities together. The best way to change the world is through education.” 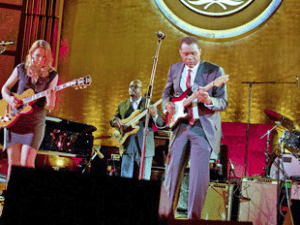 After his remarks, Mr. Hancock performed as part of a concert that was the epitome of an international event: Concertgoers were thrilled to the artistry of more than forty musicians representing the nations of Australia, Benin, Brazil, Cameroon, China, Cuba, India, Iraq, Israel, Japan, Lebanon, the Netherlands and South Africa, as well as the United States. Among the innumerable highlights were performances by Tony Bennett, Stevie Wonder, Wynton Marsalis, Lang Lang, Christian McBride, Esperanza Spalding, and fellow ICAP co-president Wayne Shorter.

It was only last November, just a few months after Mr. Hancock’s appointment as a Goodwill Ambassador that it was announced that April 30 would be henceforth known as “International Jazz Day,” with the intent being to raise worldwide awareness of the virtues of jazz as an educational tool as well as a force for peace, unity, dialogue and enhanced cooperation among people.

According to Mr. Hancock: “Music has always served as a bridge between different cultures; and no musical art form is more effective as a diplomatic tool than jazz. It provides a forum for dialogue among the people, which Daisaku Ikeda continually emphasizes as a means of peace.”