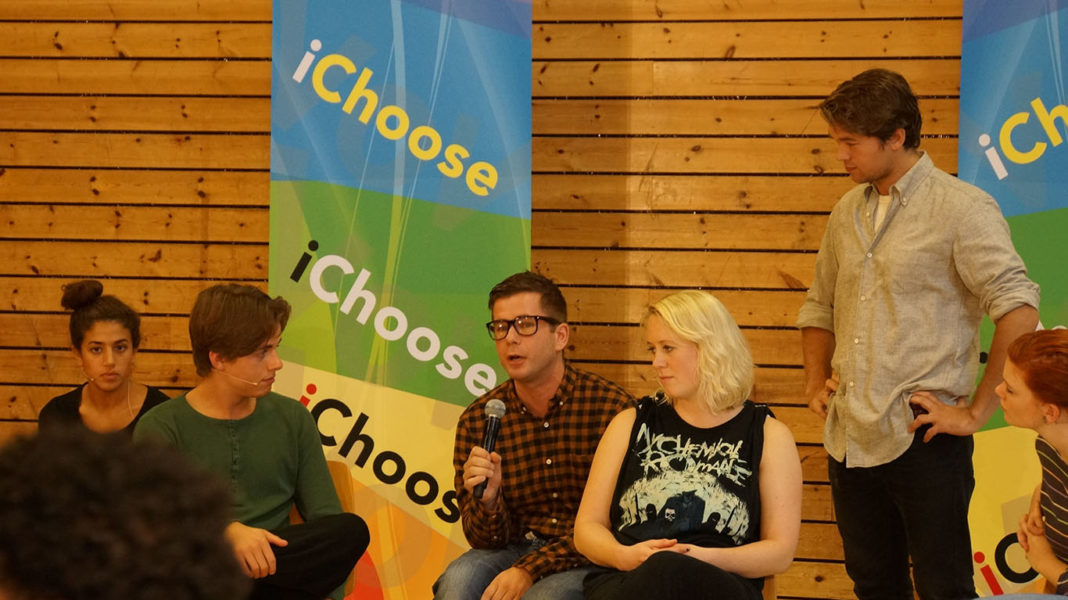 The iChoose production team visited Sofienberg High School for two morning classes on September 19. Attending the first class production were more than 200 students of various religious background, most of whose families had emigrated from countries outside Norway. The warm connection the cast members established with the young audience members provided an atmosphere in which they could express deep feelings about how they had been affected, harrowing experiences involving language problems, peer pressure and other sorts of bullying. 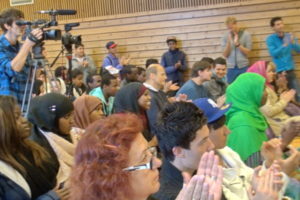 For the second morning class, more than 100 first-year students filled the auditorium. Again, after the performance, the sincere, touching stories students shared revealed the dramatic histories of their own lives. Presented were stories of bullying based on skin color, language difficulties and recent violence including knife fights. After the show, the student with the knife story approached Jakob Oftebro for advice on dealing with violent situations.

According to David Lovvradk, a Sofienberg High School teacher: “This subject is so important, especially for young people, but indeed for the whole Oslo population, because we have such a diverse population. Being able to live together and understand each other independent of background, ethnicity or religion, it is one of the most important things we can learn.” 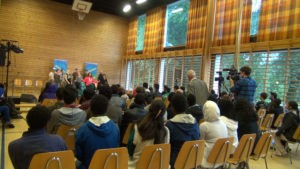 Mr. Lovvradk continued: “We’ve had productions in the past, but he iChoose production was particularly effective because it combined the drama with dialogue and direct communication with the students. It touched the hearts of so many students. We could see that they were engaged. We are going to continue with the discussions in the class.”

iChoose next visited an afternoon class at Persbraaten High School. For this presentation as well, more than 100 students attended. Persbraaten High is situated in a so-called “wealthier” suburb of Oslo, and the challenges facing the students are less of the socio-economic variety. Rather, the students’ issues fall more in the realm of “passive violence,” expressed through behavior like name calling, teasing, insulting and otherwise communicating disrespect. 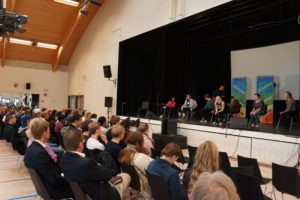 Participation in the after-show discussion was sparser at Persbraaten. The team discovered later that the reason for this was that the cast remained seated in chairs on the elevated stage, which created for the students as sort of demarcation line between “them” (the cast) and “us.” It proved a valuable learning experience for all involved, and iChoose cast members resolved to get closer to the students for the remaining programs, carrying out their discussion at floor-level instead of from the stage.