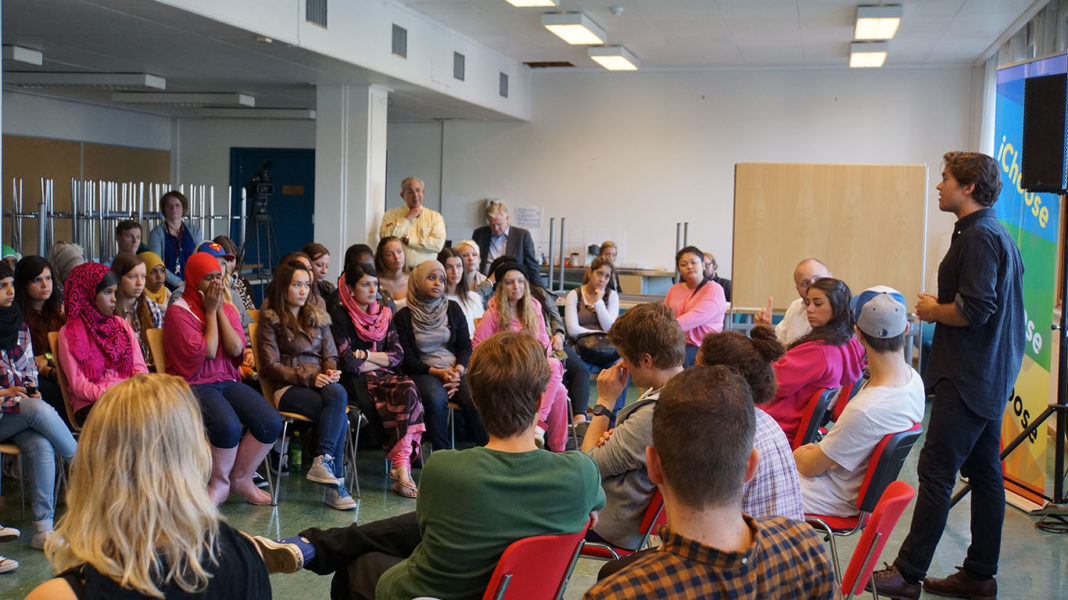 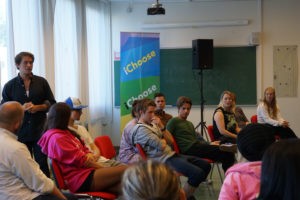 • A series of testimonials by the cast members, which are largely based on improvisation, but draw heavily from personal experience.
• A segment called “It’s up to me,” which contains three tableaux based on improvisations by the actors around concepts such as “social exclusion,” the feeling of “being ripped apart,” and “togetherness”
• An opening monologue in which “the teacher” asserts that nuclear arms still pose a serious threat to human life in the modern world, followed by a dialogue between “the teacher” and “the students” in which Mohamed ElBaradei’s efforts to prevent the use of nuclear energy for military purposes is addressed;
• An homage to Norwegian Nobel Peace Prize winner Fridtjof Nansen, who organized relief efforts for victims of the early 20th-century Russian famine. 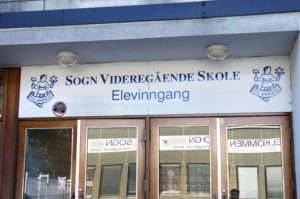 First stop for the iChoose team: Sogn High School on September 17. Jakob Oftebro, a young Norwegian actor, opened the performance by introducing ICAP and iChoose. Some 50 first- and second-year students were present for this Norway debut. When first contacted, Sogn teachers said that the iChoose show theme was particularly relevant for their students, considering that they had experienced problems with these particular classes.

The overriding message to the iChoose program is twofold. First, there is the aspect from which the program derives its name; that it is crucial to awaken to the fact that we all have a choice in what actions we take. The second aspect is the need to develop our awareness of “passive violence,” something that we are all susceptible to committing unconsciously. As socio-political activist Arun Gandhi explains: “We generally deny our own violence because we are ignorant about it or because we are conditioned to look at violence only in its physical manifestation – the wars, fighting, killing, beating, rapes, etc., where we use physical force. However, we don’t realize that oppression in all its forms, name calling, teasing, insulting and disrespectful behavior are all passive forms of violence.” 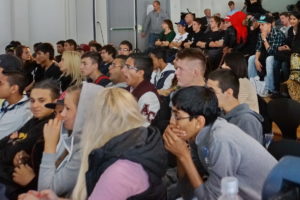 The iChoose program was very well received by students and teachers alike.

Mr. Oftebro moderated the post-performance discussion with students and cast members. One student said she was especially touched by a scene in the musical in which a girl ends her relationship with a violent boyfriend. When Mr. Oftebro asked if any of the discussion participants had ever experienced or observed bullying in school at some point, several nodded their heads to signify that indeed they had.

Teachers commented that they thought the show represented an intriguing new angle to the theme of bullying. They also said that they wanted to use several of the questions raised by Jakob Oftebro and cast for further class discussions. 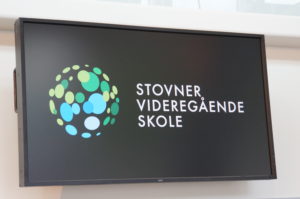 The iChoose production team then visited Stovner High School for an afternoon class. More than 300 students comprising eight classes of first-year students attended in the school’s smartly decorated auditorium. The principal had informed us in advance that bullying is a problem area on which they are presently focusing. As the audience filed in, some iChoose staff members expressed that this might be a difficult crowd to reach. But it turned out that the response was quite good and the actors felt that the message really hit home with many of the students. A handful of the Stovner students were even quite vocal in sharing their comments and thoughts.

Stovner principal Roald Olsen told the iChoose team afterward that he thought the show put forth a vital and well-communicated message. He then suggested that for future engagements, we might ask students before the performance to prepare some questions or reflect on the theme. Taking his advice to heart, the iChoose staff contacted remaining schools on the tour and encouraged them to prep the students in order to help facilitate the post-performance discussions. 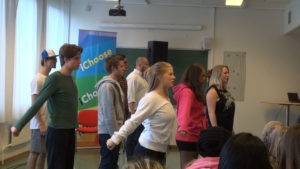 One salient point that served as a catalyst for several students to become engaged in the discussion was when Jakob Oftebro pointed out that bullying often demands an audience. This is an important example of passive violence, and witnesses to bullying have a responsibility to not merely be audience members, but rather they must take action and contribute to creating a better environment for all.

The main discussion topic suggested by the audience was the question: What if you don’t mean to bully someone, but your approach is perceived as bullying? One male student, who had been sitting in the back of the auditorium with some students who had been a bit unruly during the performance, posed the question, obviously trying to get attention from classmates. Yet, because the question is very relevant, the cast members addressed it with great sincerity, concluding: “It is important to be sensitive to how your comments are received, even when you are only trying to be funny. We are all different and perceive situations in different manners, therefore, it is always the one who feels bullied who has a major say in what is and what is not bullying.”