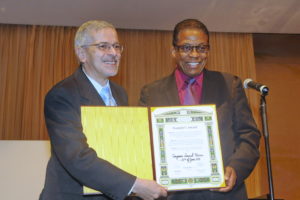 Music historians have called (José Carlos) Amaral Vieira “one of the most influential figures in the music life of Brazil.” The composer, pianist and professor of musicology has garnered innumerable laurels over the many decades of his career, including a major São Paulo festival devoted solely to his works. On June 23, at Santa Monica’s World Culture Center, Mr. Vieira received the ICAP Founder’s Award, presented by ICAP co-president Herbie Hancock.

In a recent issue of SGI Quarterly, Daisaku Ikeda, shares his impressions of Amaral Vieira, which we are presenting here. Remarking on the virtues of Mr. Vieira’s artistry, Mr. Ikeda conveys the key insight that “the heart of a great artist beats in time with the hearts of the people.”

(Many thanks to the editors of SGI Quarterly for allowing us to reprint the following essay from their January 2012 edition.) 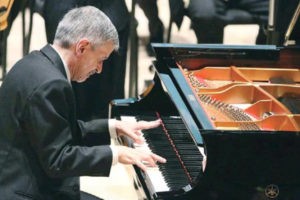 Our society is like a piano which is badly out of tune. It is so discordant that it has a disquieting effect on the listener. Faced with this, even when the well-intentioned play a heartfelt melody, their once beautiful notes come out as a jarring cacophony. How is such a piano to be tuned?

Amaral Vieira, the internationally acclaimed Brazilian composer and concert pianist, and the current president of the Brazilian Society of Musicology, told me his philosophy. “Today, everything is moving forward—everything but the human spirit. Music, a symphony of many sounds, can express the eternal, the universal and the limitless. . . Music has the power to change our emotions—even transform the way we live. I want to contribute to society by reviving the human spirit through music.”

The fine arts, by definition, should strive toward perfection in bringing out the best and the brightest in humanity. In reality, however, exactly the opposite is true in many cases. However, Vieira is regarded as a true musician, one who cares more about people than popularity.

Sidney Lanier, the American poet and musician, once said that music is love in search of words. What’s more, doesn’t this kind of pure hearted love—a love which brings happiness and encouragement to others—really make art great? On the other hand, the art created by a small-minded person whose life is shriveled around a tiny core of ego can only be petty and inferior. True art enhances our humanity, and the heart of a great artist beats in time with the hearts of the people. 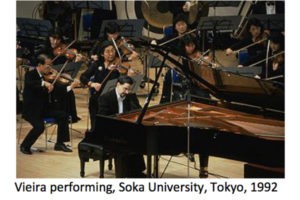 Vieira is well known for the consistent intensity of his performances. He says: “I relish each concert as an opportunity to reach my audience—people whom I may never see again. They may come to my performances searching for inspiration: That’s why I take my concerts so seriously.”

The Brazilian pianist declares: “We should always be reaching for the next stage of our development. To ‘create value’: Isn’t that the meaning of the word ‘soka’ in Soka Gakkai International?”

Vieira’s remarkable life suggests a unique mission. Although he did not come from a musical family, he began playing the piano at the age of six. He fell in love with the sound of the piano while listening to his sister’s lessons. She was five years older than he and not all that enthusiastic about practicing. He told her: “You just play for five minutes, and I’ll take the remaining fifty-five.” While their parents thought their daughter was practicing, she in fact sat nearby reading a book, while their son played the piano. The young Amaral tried to persuade his parents to let him go to music school, but they discouraged him, saying that a boy should be out playing soccer instead of sitting at the piano. But he was not deterred.

The famous Brazilian composer and conductor Souza Lima recognized the young boy’s talent and arranged to give him special private lessons. Lima said, “I’ll teach you, but on one condition: I won’t make special allowances for you because you are young. I will treat you as an adult.”

Vieira began composing music at the tender age of 8. In 1965, when he was 13, he went to Paris alone to study. His entire family was strongly opposed to this move, which, considering his age, was perhaps understandable. The thought must have caused them untold worry! They finally agreed to let him go, however, on the condition that he phone home every 10 days. He eventually passed the entrance examinations for the Paris Conservatoire with top marks.

“The hardships I encountered back then created the foundation of my personality, both as a musician and as a human being,” he declares.

He reached a turning point at the age of 25. He was recommended for the position of head of the Music Department at the distinguished Yehudi Menuhin School for musically gifted children in the United Kingdom. This was a coveted post, carrying both prestige and financial stability.

But Vieira hesitated. “I am a Brazilian,” he thought. “Don’t I have a duty to work for my own country?” After a great deal of agonizing soul-searching, he decided to return to Brazil. Everyone around him tried to dissuade him, saying he was throwing away a golden opportunity.

Today, he comments, “If I had accepted the offer then, I’m sure I wouldn’t have developed to the extent that I have. I might have been blessed with opportunities, but my life would have been one without challenges. And it is challenge which makes us grow as human beings.”

Vieira constantly reflects on his purpose. He has determined always to devote himself to lofty goals. It is this sense of mission that purifies the self, the arts and society. 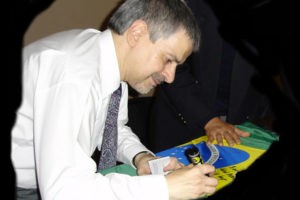 Since his return to his homeland, the Brazilian composer has consistently devoted himself to offering uplifting music for the people. In order to accomplish this, he has not only performed and composed music, he has also written many columns in newspapers and magazines, and in addition, participated in music education programs for young people and musical exchanges with other nations.

“Brazil does not belong to its elite,” he maintains. “It belongs to the people. No human being is better than any other. We are all the same, all equal.”

He has received many awards for his talent and accomplishments. The piece he wrote for me, “Sounds of Innovation,” won Brazil’s 1993 Symphony Award.

At our first meeting, he pledged to exert himself as a musical ambassador from that day on, conveying to the world through music our shared message of humanism, something he had sought for so long. He proclaims: “Those who believe we must devote our energies to culture after we have become a great nation have things backward. A nation never becomes great unless its culture flourishes at the same time.”

Art is a form of self-expression. No matter how popular it may be, art which lacks the humility, honesty, thought, philosophy and determination to seek a higher perfection is ultimately mere vanity. Such shallow art cannot enrich the human spirit.

An old Chinese legend tells of a great musician who played the zither with such mastery that his music caused a cool breeze to blow, transforming spring into autumn, even causing the trees and plants to bear their autumn fruits. When he played a different melody, he invoked summer; and then, again, his music changed the season to winter. And in a climactic finish, his playing brought forth a perfumed breeze, auspicious clouds in the sky, and a bubbling spring from the earth all at once.

Spiritually charged music contains the power and harmony of the universe. It is the breath of divine life. Plato said that a change in music can change an entire society.

In this discordant age, we must open the door to our hearts and sing with joyous and vibrant voices. We need to find new ways to “tune” the human spirit through a great cultural movement of the people. Vieira has dedicated himself to this task of striking at the deepest chords of human feeling.

“We live in a dualistic world,” he said. “There is a plus and minus, a good and bad to everything. I believe music has the power to lead us from disharmony to harmony.”