According to legend, anyone who was ill or otherwise ailing could be healed by swimming around Moku Ola (Hawaiian for “Island of Life”; also known as “Coconut Island”) three times. In ancient times, Moku Ola was considered a safe haven, a place for healing and refuge. Today, Hawaii County, home to Moku Ola, hosts a multitude of events—from family picnics to large celebrations of King Kamehameha.

On Oct. 5, the County hosted its fourth World Peace Festival—a relative annual newcomer to the its roster of events—which came together as a partnership among Hawaii County, the Hilo Downtown Improvement Association, and the International Committee of Artists for Peace. The festival drew more than 1,500 people, who enjoyed cultural displays and performances, arts and crafts, and delicious culinary treats. 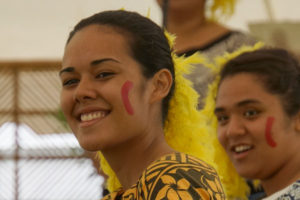 In her remarks, Hilo Downtown Association Executive Director Alice Moon noted that County of Hawaii Mayor Billy Kenoi was the driving force behind this festival, inspired by leaders of peace such as Mahatma Gandhi, Dr. Martin Luther King Jr., Dr. Daisaku Ikeda, Queen Liliuokalani and all other people who are champions of compassion, love, respect, care and sharing which is the spirit of aloha.

Since Dr. Daisaku Ikeda’s travels began 50 years ago, on October 2, 1960, starting with Hawaii, “Therefore, in honoring Dr. Ikeda’s efforts, [the mayor] selected the first Saturday of October to host the festival each year.”

“Philosophically, with all the world turmoil, from bullying to genocide, from chemical warfare to domestic violence, so many of us feel like we can’t effect change,” Ms. Moon continued. “This gift to Hawaii County came at the right time, because it was (and still is) time to bring together all people, to gather in peace and to celebrate our diversity. We can offer a free, family-fun festival, where everyone feels safe and welcomed, on this one special day.” 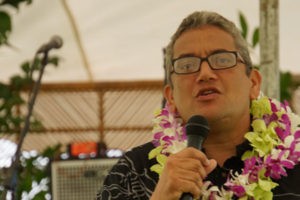 County of Hawaii Mayor Billy Kenoi, in his official welcome, noted that the festival was an occasion to promote the spirit of Aloha, the universal language of love. “You can hear the laughter of the children in the background. The laughter of our children is the sound of peace. Wherever our children laugh, it’s a healthy, safe place to be. Wherever our children smile, play and laugh, they bless all of us. That means that our families are strong, that our neighborhoods are good places to live, work and play. And if we have healthy, safe children and healthy, safe families, we will continue to have a wonderful Hawaiian island.” The mayor concluded by saying that Dr. Ikeda has been demonstrating this Aloha spirit globally.

Mayor Kenoi also expressed appreciation for all the behind-the-scene efforts of many citizens, who decorated the entire island with beautiful flowers and helped in setting up the stage, in cleaning up after the event, and even in staying overnight on the island before the festival for security purposes. 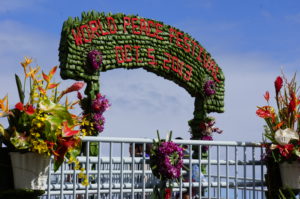 Four years ago, when Annette Uyeda heard about Mayor Kenoi’s World Peace Festival plan, she submitted an idea of decorating the venue with an abundance of flowers. After being asked to be in charge of the project, Ms. Uyeda reached out to many flower vendors who donated the beautiful ornamental blossoms. Today, citizens look forward to visiting Coconut Island, which welcomes them with a stunning arrangement of flowers. Countless gorgeous blossoms greet visitors at the arch before the bridge to the island and the stage. And numerous bouquets decorate the poles that support the huge audience tent as well as the vendor canopy poles. Ms. Uyeda said that she wanted all visitors to leave the venue with an experience of aloha spirit.