Wayne Shorter can pluck a note out of an audience memberâ€™s mouth and build an instant tune around it.

Onstage at UCLAâ€™s Royce Hall a few years ago, following a squeal of approval from someone in the crowd, Wayne mimicked the high-pitchedâ€”Weeoooh!â€”a few times vocally into the emceeâ€™s microphone. He then replicated it with his horn to kick off an enthralling improvisation with an ensemble â€œco-frontedâ€ by longtime pal and fellow ICAP co-president, Herbie Hancock. 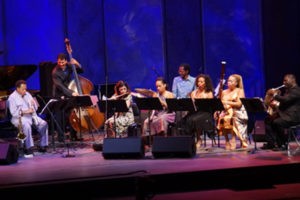 It was Herbie who organized the all-star lineup for a special tribute concert before a near-capacity crowd (17,000) at the Hollywood Bowl on August 28, in celebration of Wayne Shorterâ€™s 80th birthday.

The nightâ€™s program included Imani Winds, Sound Prints (led by Joe Lovano and Dave Douglas) and ACS (an all-female trio made up of Geri Allen, keyboards; Esperanza Spalding, bass; and Terri Lyne Carrington on drums). After the invitees, the birthday boy himself took the stage to performâ€”first in duet with Herbie, and then with his regular quartetâ€”for nearly two and half hours.

The years, obviously, have done nothing to take the edge off Wayne as an artistic forceâ€”if anything, theyâ€™ve merely provided him with a bottomless wellspring of material to draw upon as he explores and extends the boundaries of musical creativity. As a case in point, his latest CD, Without A Net, Wayneâ€™s first album for the prestigious Blue Note label in more than 43 years, has been one of the most acclaimed jazz records of the year.

In the days leading up to the Bowl performance, Wayne spoke with Chris Barton from the Los Angeles Times about what itâ€™s like making music with his current quartetâ€”drummer Brian Blade, pianist Danilo Perez and bassist John Patitucci. â€œNo one knows whatâ€™s going to happen each night,â€ Wayne mused. â€œI always say, we donâ€™t really rehearse . . . How do you rehearse the unknown?â€

In a way, you could say that for Wayne Shorter, life is a rehearsal for making himself available to create art out of whatever is around him. 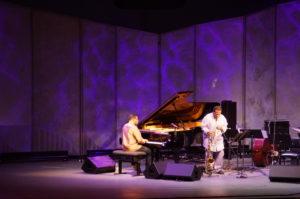 Zero Gravity, an upcoming documentary, focuses on Wayneâ€™s life and music. A promo video for the film features friends and fellow music superstars like Carlos Santana, Esperanza Spalding, and, once again, Herbie Hancock, who says of his pal: â€œWayne is a visionary, and visionaries open doorways . . . for everyone. So, itâ€™s important to hear Wayneâ€™s music and to know about Wayne Shorter because he has a way of triggering a response that encourages the opening of oneâ€™s perception . . . He is at the top of his game . . . and we donâ€™t know whether thatâ€™s the peak of just another mountain. What a great inspiration he is to all of us. If heâ€™s at the top of his game â€” more prolific, more profound musically carving out new territory that nobody has even conceived of beforeâ€” if he can do that at 80 years of age, that means we can do that.â€

Esperanza Spalding, winner of the 2011 Best New Artist Grammy award, points out: â€œThereâ€™s always more to know [about Wayne], so for us to have this opportunity right now, when heâ€™s with us, to delve into his history, his story, his process, his evolution as a human being, and actually capture it for everybody who comes after us, thatâ€™s an opportunity that we canâ€™t miss.â€ 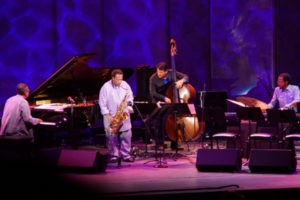 Affirming Wayneâ€™s place in the pantheon of music, Carlos Santana adds: â€œItâ€™s supremely important that his life be documented so that, 2,000 years from now, people can understand that he already knew what was going to happen musically. Thereâ€™s only three people [who have been] at that level in saxophoneâ€”thereâ€™s Charlie Parker, John Coltrane and him . . . they give humanity a door to infinity, a door to immortality, a door to eternity. â€

At every turn, Wayne is acknowledged not only for his artistry, but for his spirit, which comes through his music, to open and revolutionize peopleâ€™s hearts, to help others go beyond the seemingly impossible.

In the Foreword to Michelle Mercerâ€™s laudatory biography, Footprints: The Life and Work of Wayne Shorter, Herbie Hancock says of his pal Wayne: 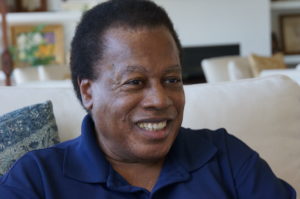 Wayne is a transformer. He exudes such honesty, purity, trust, and respect for others that he can transform, elevate, and awaken your life while youâ€™re both having fun. Wayne transforms people, all right, and he gets better and better at it. Itâ€™s as though heâ€™s aware that itâ€™s safe to be honest, pure, and trusting. Itâ€™s a source of light. He sees that inside everyone, and wants to let that light reveal itself and others. He takes you outside the box and into expanded possibilities.

You wonder why Wayne looks and acts so much younger than his years? Well, he feels joy in that world of infinite possibilities. According to Wayne, obstacles are opportunities, and believe me, he has experienced many tragic ones. Shouldnâ€™t we all develop the courage to transform our viewpoint in this way?