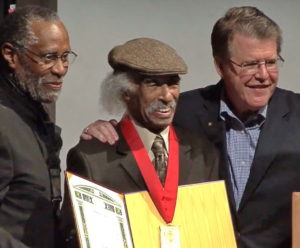 In appreciation of his 70-year career in jazz and his contributions to promote peace, culture and education, the International Committee of Artists for Peace honored famed arranger/composer Gerald Wilson with the ICAP Founder’s Lifetime Achievement Award. This presentation took place in Santa Monica, California, on April 21, before hundred of fans on hand to attend the 12th-annual “Music for Peace” concert featuring The Ikeda Kings Orchestra under the musical direction of jazz luminary, Bennie Maupin.

Herbie Hancock, Co-President of ICAP and a long-time collaborator with Maupin, expressed his congratulatory remarks to the maestro via a video presentation that also featured a montage from the early days of Gerald Wilson’s career. Recently, at age 94, Mr. Wilson produced a Grammy-nominated CD titled “Legacy,” and still writes for and performs with his own orchestra regularly.

The historic award presentation can be viewed in the following video, produced for The Ikeda Kings Orchestra by Paul Sabu Rogers.