On July 12, guitarists and ICAP artists Larry Coryell and Marcus Dunleavy returned to the Prosser Career Academy (high school) on Chicago’s west side, for a dialogue with students. The conversation was held in support of a planning session for Prosser’s annual autumn community-building activity known as “Unity Week.” 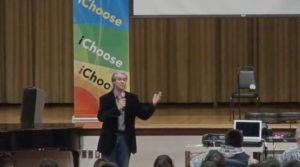 Marcus Dunleavy began by offering praise and deep appreciation to the Prosser students for their commitment to and efforts for peace and unity, especially in Chicago, where the need for such qualities has been felt intensely in recent years. Mr. Dunleavy then acquainted the attending students and faculty with the contribution toward those goals that ICAP has been providing, especially though its anti-bullying program, iChoose. iChoose is a transformative project consisting of a 20-minute mini-musical performance for teenagers followed by a heart-to-heart dialogue between cast members and audience. The performance portion, which comprises music, dance, role-playing and personal testimonials, serves as a powerful vehicle to open the heart of each audience member for the dialogue session to follow.

Prosser students learned about the various forms and causes of bullying and other violence-involved situations, and how to avoid and avert them. Included were lessons about “passive violence,” which is often expressed through name-calling, teasing, insulting and other types of disrespectful behavior that generates anger in the victim. Students also learned about the most common form of harm—self-violence, the tendency to beat oneself up or do other self-inflicted harmful things. Ultimately, they had the opportunity to increase their awareness that they, themselves, can become catalysts for immediate positive change by exercising their power to choose peace instead of violence. 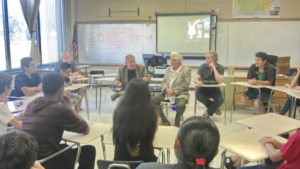 A few days prior to this planning session, Prosser principal Ken Hunter expressed his intention to facilitate the students in arriving at their own ideas on how to build peace in their neighborhood and toward related issues. At today’s planning, after expressing his appreciation to the ICAP artists for again reaching out to Prosser students, Mr. Hunter engaged the students in an exchange. He asked them to state their names and share what they wanted most in life. This proved to be his clever way of eliciting topics that could be turned into peer-led presentations for Unity Week this coming fall semester.

Among the students concerns were such issues as:
How can we develop a long-term perspective so that we don’t sweat the small stuff?
What happens when we make a judgment about someone based solely on that person’s appearance?
The importance of taking responsibility and not blaming others or circumstances (as an excuse for not achieving our dreams).
Celebrating diversity while cherishing uniqueness.
How to replace greed with compassion. 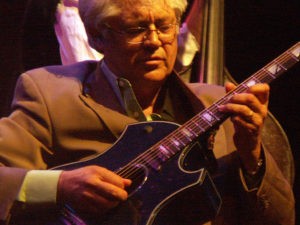 Larry Coryell spoke about the importance of seeking out mentors and reading great literature as a means to elevate consciousness and understand life. He then shared a lesson he learned from Dostoyevsky’s The Brothers Karamazov—that, when experiencing great difficulty or suffering, it’s restorative to recall a time or times in childhood when one has experienced tender, warm, happy, feelings, and, to bring those memories and feelings into the present. In that way, we can remain open-hearted.

Mr. Hunter invited Mr. Coryell back to perform again soon. While he will be on the road for the near future, Mr. Coryell offered to send the students a piece from his new opera, “War and Peace,” so that they could work on it and perform it at a later date.