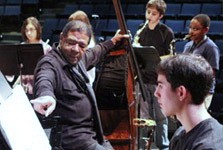 As 16-year-old Alex Wood plays the jazz standard “Misty” on the piano, bassist Buster Williams hangs on every note. But it is the absence of sound he is listening for.
“Allow the space and the air in the music to be part of the improvisation,” says Williams – brow furrowed, bass resting on his shoulder – in the auditorium of Abington Friends School.

Williams, 70, is a living legend of jazz, a sideman who has jammed with the likes of Miles Davis, Count Basie, Herbie Hancock, Sarah Vaughan, and Nancy Wilson. Recently, he spent three days at the Montgomery County private school doing what he could to make sure a new generation will pick up the beat in the 21st century.

On that afternoon in Jenkintown, his words struck a chord. Wood played again, and there was more nuance as he slowed, allowing quiet moments in the music instead of running through the piece like the classically trained pianist he is. Williams loved that. “What he learned in that short time,” the jazzman said later, “was to trust not only what he had to say; he trusted what others were saying. You don’t have to fill up space just to fill up space.” 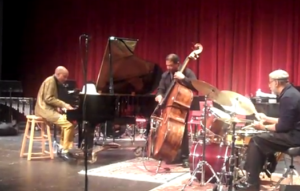 During his gig at the Quaker school, Williams cut a wide groove. He played for kindergartners as they danced around, worked with young vocalists on their timing, and stoically sat in with the jazz band as it rehearsed “Chattanooga Choo-Choo.”
“It wasn’t even the hippest arrangement,” he said dryly after running through the jazz standard for the umpteenth time. When students asked how much his bass cost, he laughed and told them more than their college education.

Williams has been making music on stage for 53 years. He grew up in Camden, where he learned acoustic bass and drums from his father. After studying theory and composition at Philadelphia’s Combs College of Music in 1959, Williams joined the Heath Brothers the next year and played with Gene Ammons and Sonny Stitt in 1960 and 1961, as well as behind singers Dakota Staton, Betty Carter, Vaughan, and Wilson, who was maid of honor at his wedding to his high school sweetheart, Veronica, in 1965. 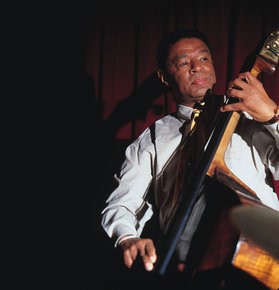 Jimmy Heath recalled the early days of their collaboration when Philadelphia was sprinkled with smoky, boisterous jazz clubs filled with the legends of bebop. “He’s one of the giants of the bass,” Heath said. “I remember when he first worked with me – I think it was a place on 15th Street called the Sahara around the corner from the Showboat in Philly. He developed into a great soloist. He’s at the top of his game now.”

Williams moved to New York in 1960 with a short stop in Los Angeles, where he played with the Jazz Crusaders and Davis. Back in New York in 1969, he joined Hancock’s exploratory Mwandishi Sextet and was a mobile anchor doubling on acoustic and electric basses.

Since then, Williams has flourished through many periods of changing fashions in jazz. He played, recorded, and collaborated with jazz giants such as Basie, Art Blakey, Carter, Chet Baker, McCoy Tyner, Woody Shaw, Benny Golson, and Kenny Baron, to name a few.
“Genres in jazz move quickly,” he said. “It’s totally involved with life itself. It never stagnates.”

And although the clubs and radio stations that played jazz are fading away, “jazz is like the proverbial roach – you can’t kill it,” Williams said.

One of his favorite gigs was for the 2004 Steven Spielberg movie The Terminal, which starred Tom Hanks as a foreigner trying to get the autograph of tenor saxophonist Golson, but who gets stuck in New York’s JFK Airport.

In 2009, with their parents ill, Williams and his wife sold their five-story brownstone in Harlem and moved to an apartment on the first floor of an old Victorian in Merchantville.
Still touring the world with his own quartet, Williams started a music camp last summer with 22 students, including one from Germany, and hopes to do the same this summer and then open the Buster Williams International School of Music in South Jersey next year. He’s looking for a building and funding. 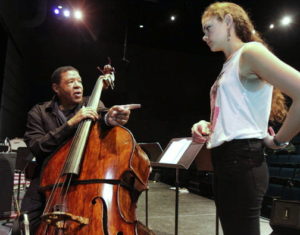 “Kids need this. And I want to play a decisive role in the future development of our talented youth,” he said.

He certainly impressed students such as Raquel Kahn, 16, a lanky, curly haired vocalist at Abington Friends who says Ella Fitzgerald is her favorite jazz singer. Working with Williams, she said, made her a better musician.

“He has this incredible energy about him and it’s contagious. Without criticizing you, he makes you better.”

(Many thanks to Kathy Boccella and the Philadelphia Inquirer for permission to use this article.)