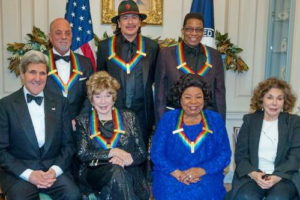 As the Kennedy Center’s official website explains, the “Honors provide recognition to living individuals who throughout their lifetimes have made significant contributions to American culture through the performing arts. The primary criterion is excellence . . .”

At this year’s version of the annual gala, Mr. Santana was introduced by musician/actor Harry Belafonte, who told the Washington, D.C., audience: “Now Carlos is a citizen of the world. He belongs to all of us . . . You continue to be informed by the immigrant experience on the journey to the great American dream.” 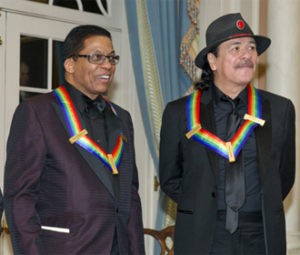 Mr. Hancock, introduced by TV personality Bill O’Reilly, was given a musical tribute by his fellow ICAP co-president, Wayne Shorter, and other jazz greats, including Terence Blanchard and Jack DeJohnette. The program also included a presentation by Snoop Dogg, who praised Mr. Hancock for virtually creating hip-hop music.