Most Inhumane of Weapons 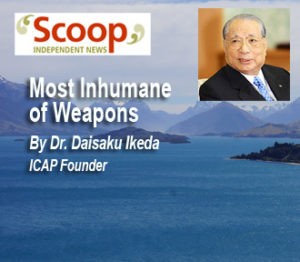 I believe that most of the world’s citizens would agree that nuclear weapons should be considered inhumane. It is encouraging to see that there is now a growing, if still nascent, movement to outlaw nuclear weapons based on this premise.

This was highlighted at the 2010 Review Conference of the Parties to the Treaty on the Non-Proliferation of Nuclear Weapons (NPT), whose Final Document noted a “deep concern at the catastrophic humanitarian consequences of any use of nuclear weapons” and reaffirmed “the need for all States at all times to comply with applicable international law, including international humanitarian law.”

Following this, in May 2012, sixteen countries led by Norway and Switzerland issued a joint statement on the humanitarian dimension of nuclear disarmament.

On March 4-5 this year, an international conference on the humanitarian impact of nuclear weapons will be held in Oslo, Norway. Prior to this conference, on March 2-3, the International Campaign to Abolish Nuclear Weapons (ICAN) will organize a Civil Society Forum there to demonstrate that a treaty banning nuclear weapons is both possible and urgently needed.

There have recently been signs, even within the nuclear-weapon states, of changing attitudes regarding the utility of these weapons. In a speech at Hankuk University in Seoul, Republic of Korea, on March 26, 2012, US President Barack Obama stated: “My administration’s nuclear posture recognizes that the massive nuclear arsenal we inherited from the Cold War is poorly suited to today’s threats, including nuclear terrorism.”

Further, a statement adopted at the NATO Summit in May 2012 noted: “The circumstances in which any use of nuclear weapons might have to be contemplated are extremely remote.” Both of these statements point to the lessened centrality of nuclear weapons in national security thinking.

The logic of nuclear weapons possession is also being challenged from a number of other perspectives.

It is estimated that annual aggregate expenditure on nuclear weapons globally is around US$105 billion. This makes clear the enormity of the burden placed on societies simply by the continued possession of these weapons. If these financial resources were redirected domestically to health, social welfare and education programs or to development aid for other countries, the positive impact on people’s lives and dignity would be incalculable. 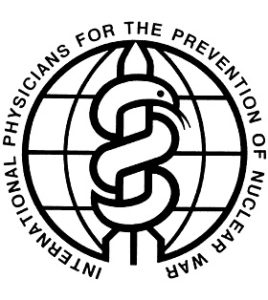 In April of 2012, important new research on the effects of nuclear war on the environment was announced in the report “Nuclear Famine.” Issued by International Physicians for the Prevention of Nuclear War (IPPNW) and Physicians for Social Responsibility (PSR), this report predicts that even a relatively small-scale nuclear exchange could cause major climate change and that the impact on countries far-distant from the combatant nations would result in famine affecting more than one billion people.

In view of these developments, I would like to make three proposals to help shape the contours of a new, sustainable society, one in which all people can live in dignity.

First, to make disarmament a key theme of the Sustainable Development Goals which are under discussion within the UN. Specifically, I propose that halving world military expenditures relative to 2010 levels and abolishing nuclear weapons and all other weapons judged inhumane under international law be included as targets for achievement by the year 2030. 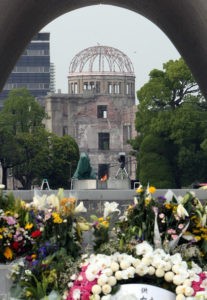 Second, to initiate the negotiation process for a Nuclear Weapons Convention, with the goal of agreement on an initial draft by 2015. To this end, the international community must engage in active debate centered on the inhumane nature of nuclear weapons.

Third, to hold an expanded summit toward a nuclear-weapon-free world. The G8 Summit in 2015, the seventieth anniversary of the atomic bombings of Hiroshima and Nagasaki, would be an appropriate opportunity for such a summit, which should include the additional participation of other nuclear-weapon states, representatives of the United Nations, as well as members of the five existing Nuclear Weapon-Free Zones and those states which have taken a lead in calling for nuclear abolition.

In this regard, I am encouraged by the following words from President Obama’s speech in Korea: “But I believe the United States has a unique responsibility to act—indeed, we have a moral obligation. I say this as President of the only nation ever to use nuclear weapons. … Most of all, I say it as a father, who wants my two young daughters to grow up in a world where everything they know and love can’t be instantly wiped out.”

These words express a yearning that cannot be subsumed even after all political elements and security requirements have been taken fully into consideration. It is the statement of a single human being rising above the differences of national interest or ideological stance. Such a way of thinking can help us “untie” the Gordian Knot that has too long bound together the ideas of national security and nuclear weapons possession.

There is no place more conducive to considering the full significance of life in the nuclear age than Hiroshima and Nagasaki. This was seen when the G8 Summit of Lower House Speakers was convened in Hiroshima in 2008. The kind of expanded summit I am calling for would inherit that spirit and solidify momentum toward a world free from nuclear weapons. It would then become the launching point for a larger effort for global disarmament aiming toward the year 2030.