The latest variation on Herbie Hancock’s fertile theme—“Possibilities”—has appeared in the form of his new memoir published by Viking Books.

Aptly titled Herbie Hancock: Possibilities (and co-written with Lisa Dickey) it covers the major dramatic and musical shifts in his life, from his childhood debut as a piano soloist with the Chicago Symphony, through his foundational jazz education as a sideman for Miles Davis, through his introduction to the Buddhist practice that’s been supporting his creativity for more than four decades, and including his current role on the world stage as a UNESCO Goodwill Ambassador.

And more than a mere recounting of the dates and facts of his life, the memoir is also chock-full of life lessons. In connection with the October 28 publication of the book, Mr. Hancock has recently been on a mini-whirlwind tour, engaging in interviews conducted by a vast array of outlets, from local publications and bookstore appearances to national and international broadcast media. Each stop has provided him an opportunity to talk about several of the lessons and ideas addressed in the memoir.

As example, on November 3, at the landmark West Hollywood (Calif.) bookstore, Book Soup, Mr. Hancock took part in a dialogue with jazz critic Don Heckman of the Los Angeles Times, in which he explained that a major reason for writing the book was to chronicle how his life has been a product of the many choices—possibilities—he had encountered over the decades. This led into a broader discussion of the topic of choices, including the following remarks:

A lot of times, people are motivated by external circumstances and they immediately react. Well, fortunately, I have been practicing Buddhism now for 41 years, and in Buddhism we talk about cause and effect and living a life of cause where, instead of just reacting to external circumstances, [which] kind of makes you a slave to life, you step back for a second and you make a choice . . . in most cases, it’d be a better choice than if you just reacted . . . 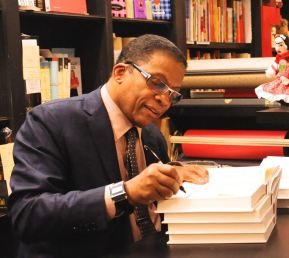 I mean it’s like texting, right? . . . just think a minute before you push the send button, and you might decide not to do it . . . We all have the capability to really build our own story and not just have it built for us by external circumstances . . . We have so many things about us that need to be developed but the potential is completely there—things that money can’t buy, and the things that really can lead to a happy life. And those are things like compassion, wisdom.

Expanding on the theme of choices, Mr. Hancock had been explaining from several angles an important principle of the Buddhism he practices, a concept called “turning poison into medicine.” It is actually the transforming of suffering caused by one’s inner negativity (or fundamental darkness) into profound benefit, favorable circumstances and inner resilience; in other words, it is the transforming of adversity into opportunity.

In light of this principle, the memoir brings forth many a raw and authentic revelation. During one notable period of his life, through a curiosity experiment gone awry, Mr. Hancock became addicted to crack cocaine. As he candidly told Howard Reich of the Chicago Tribune in a November 11 interview:

With this book, I thought this was a great opportunity to turn poison into medicine . . . And that is to take this circumstance [and transform it] . . . I mean, people don’t believe, wouldn’t believe that I actually went to that (smoking crack cocaine) Herbie’s not that kind of guy, right? . . . There is no ‘that kind of guy’ that is immune to substance abuse. 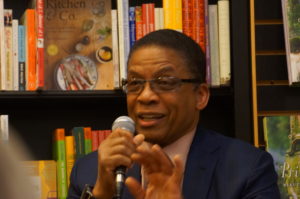 Herbie Hancock: Possibilities movingly recounts how, largely through the intervention of his family and through his dedicated Buddhist practice, he returned to the world of the clean and sober; and how he is spiritually stronger because of this triumph over his inner darkness.

Mr. Hancock also delves into the topic of the importance of choosing great mentors for one’s life and, over the years, he has cited several, including his own early piano teacher, Mrs. Jordan; Daisaku Ikeda; and the iconic Miles Davis. The book, in fact, opens with the tale of an early-1960s experience performing in Europe with the Miles Davis Quintet. Mr. Hancock recounts how during a fiery rendition of Mr. Davis’s classic tune “So What,” he played what he felt was a clunking wrong chord. Saving the moment in what could be seen as sort of demonstration of transforming “poison,” Mr. Davis, coolly settled himself for a moment, then made the sudden choice to take the notes of the “errant” chord, and through a kind of on-the-spot alchemy, used them to launch into a most memorable solo that electrified the sophisticated crowd of Stockholm jazz fans, as well as the other band members.

Mr. Hancock is also using the book and tour to debunk a long-held myth regarding Mr. Davis on stage. Again, from the Chicago Tribune interview:

Among many other highlights covered in Herbie Hancock: Possibilities, there is this profound declaration of the shift in his consciousness regarding happiness that his Buddhist practice has enabled. Contrasting his current view of life with a more materialistic view of his earlier years, Mr. Hancock writes:

I see those desires differently than I did back then. These things aren’t the root of happiness, because even if you have a spouse you may eventually want to divorce, and even if you have money you may want more. People tend to look outside themselves for things to complete them. But what Buddhism has taught me is that we must look inside ourselves for that happiness. The transformation that Buddhism offers is an internal transformation, one that will awaken you . . . What Buddhism awakened in me was the desire to apply my humanism and humanistic vision toward the goal of world peace—not just through my music but through every means at my disposal.

As an expression of that inner exploration being mirrored in expanded, global consciousness, Mr. Hancock found himself appointed a UNESCO Goodwill Ambassador in 2011. From the platform of that post, he has proposed and been instrumental in establishing April 30 as International Jazz Day—and just this year saw IJD events taking place in every nation on earth. With an even-broader perspective, he explains:

But my UNESCO activities involve more than music: I hope to host symposiums with thinkers, scholars, and artists—creative people with ideas. I just want to play a part, whatever part I can, in helping to rid ourselves of the kind of ignorance that separates people, causes misunderstandings, and creates conflict.

Viking Books, part of the international Penguin publishing behemoth, is calling this the “long-awaited memoir by one of the most influential and beloved musicians of our time,” and it announces on its company website that:

Hancock shares his musical influences, colorful behind-the-scenes stories, his long and happy marriage, and how Buddhism inspires him creatively and personally. Honest, enlightening, and as electrifyingly vital as the man who wrote it, Herbie Hancock: Possibilities promises to be an invaluable contribution to jazz literature and a must-read for fans and music lovers.

Earlier this year, Mr. Hancock—in his role as Harvard University’s 2014 Charles Eliot Norton Professor of Poetry—delivered six lectures under the umbrella title, “The Ethics of Jazz.”

We are thrilled to have this website, icapeace.org, provide a video home for this entire six-lecture set, which covered a wide breadth of topics, from Miles Davis, to Buddhism and Creativity, to technological innovations, and much more.