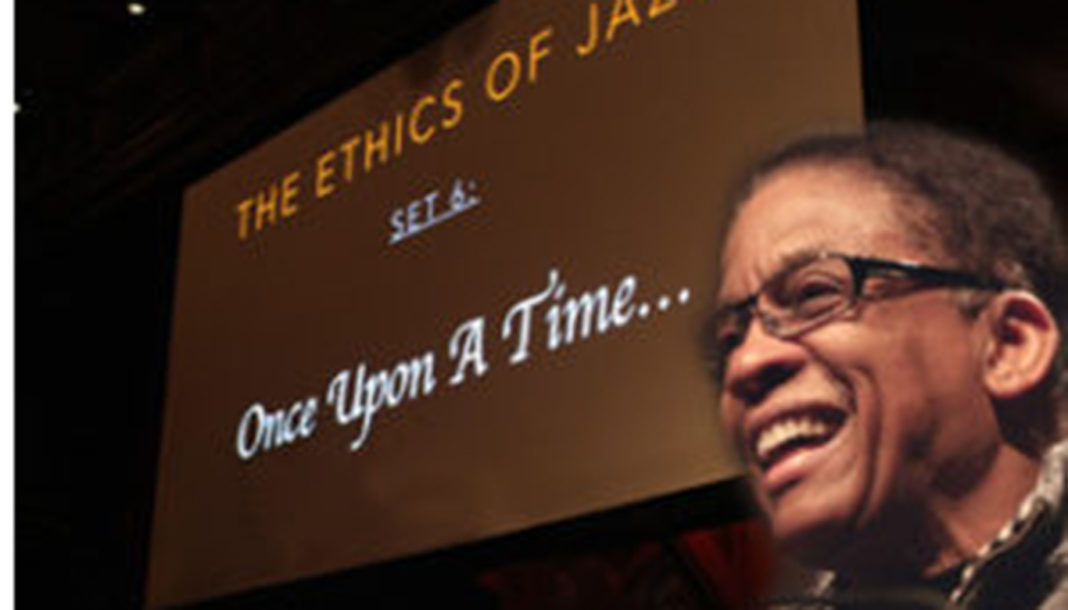 Professor Hancock & Co. dazzlingly demonstrate a performance creation for the “The Ethics of Jazz” finale. The final lecture — Set 6 — of Herbie Hancock’s series “The Ethics of Jazz” was conducted before a packed house at Harvard University’s Sanders Theatre on March 31. 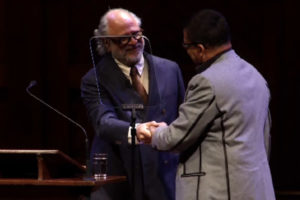 Mahindra Humanities Center Director Homi Bhabha provided an introductory greeting and remarks. He started by acknowledging Mr. Hancock — this year’s Charles Eliot Norton Professor of Poetry — for the impact he had made on the Harvard community in a relatively short amount of time, saying: “We will remember you for your ennobling humility and your abiding sense of human grace. We will remember you for the care with which you listened to each questioner and interlocutor.

”Next, a special guest, Henry Louis Gates Jr, provided a lengthier introduction. Mr. Gates is an American literary critic, educator, scholar, author, editor, host of several PBS television specials and is currently the director of the W. E. B. Du Bois Institute for African and African-American Research at Harvard, where he is also a professor. 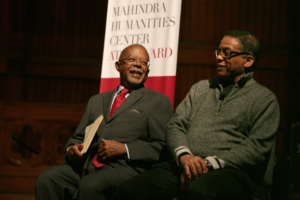 Professor Gates detailed the rich history of African Americans, both students and faculty, at Harvard, dating back to the 1870s. He noted the significance that: “. . . one day, an African-American musician would deliver a series of lectures on “The Ethics of Jazz”. Given Harvard’s deep religious roots, I couldn’t help but think, as I listened to these amazing Norton Lectures, that Herbie Hancock has not only given us the ‘Ethics of Jazz,’ he has given us the ‘Beatitudes of Jazz.’ Think of what he’s taught us over these past several weeks.” Mr. Gates then gave a poetic recap of themes and key points from Herbie Hancock’s previous five lectures in the series.

Finally, the Norton professor took the podium to begin the lecture he had titled, “Once Upon a Time.” The theme, he explained, derives from something his good friend (and ICAP co-president), Wayne Shorter, has said, as a riff off something the great Miles Davis passed along to them both as a signifier for a certain type of spontaneous musical creativity: “When Wayne performs with his band, he’s described the experience as this, and I quote: ‘When we get together, we don’t rehearse . . . without rehearsing, you’re really out there naked . . . and the audience will see struggle and, ultimately, hopefully, victory.’” According to Mr. Hancock:  “Wayne continues: ‘Just get up there. Look at the paper and start playing. Don’t play what you see on the paper. What’s behind that music? Look for the face. Look for the dialogue which is actually you.’”

“Once upon a time,” said Professor Hancock, “Now that’s a phrase that is magic. It conjures up the infinite possibilities of performance.”

Talking about how performances can come in all shapes and sizes, he referenced the story of Alice Hertz-Somer, a Holocaust survivor who maintained inner peace during that human tragedy by performing more than 100 concerts in a concentration camp. She lived to be 110. 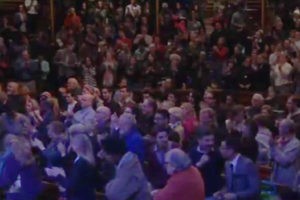 “The purpose of a performance often goes beyond just entertainment,” he said. “Performances can highlight a cause, for example civil rights; the aids epidemic; the plight of a beleaguered nation after horrific natural or internal disasters. And can be rough around the edges or worn smooth by experience. Performances are an effective means to communicate the entire spectrum of human emotions and they take us on excursions and voyages without having to pack a suitcase.”

This proved to be a lead-in to the highlight of the day. The audience would then get to witness a “performance” of a mock-Jazz concert rehearsal. Mr. Hancock was joined onstage by drummer Teri Lyne Carrington; guitarist Lionel Loueke, and bassist Josh Hari (a student from the Berklee College of Music, where Ms. Carrington is on the faculty). 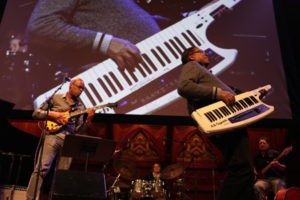 “We start with nothing,” Professor Hancock explained, “We have to decide which songs we’re gonna play, which concepts we’re gonna use, design and structure arrangements, and, in this case, get to know each other because I’m meeting the bass player, Josh, for the first time today.”

Mr. Hancock continued: “This preparation, which you’ll see, is an adventure of personalities, ideas, and perspectives. And there is a coalescence and empathetic atmosphere that is shared among the players. It’s kind of like making a meal. Everybody pitches in to contribute to what we hope will be satisfying but leaves you just a little bit hungry for more. In Jazz, we try to make the arrangement provocative for the musicians and the audience so that the performance has the stimulus to develop and, hopefully, be inspiring. We reach out from our hearts to yours.” 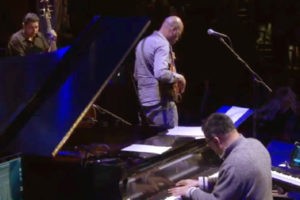 With all performers miked so that the audience could hear their collaboration, the rehearsal began, and the bulk of the day’s program was devoted to a comprehensive exploration of a composition by Mr. Loueke, followed by an improvisatory jam on Mr. Hancock’s 1970s classic, “Chameleon.”

Following enthusiastic applause, Professor Hancock made his way back to the podium to deliver his wrap-up remarks for the entire series. First, he reminded everyone of this year’s version of one the signature events of his career  — the celebration of International Jazz Day, April 30. He announced proudly that “every country in the world will be participating in the festivities,” and that pertinent info on how to get involved, as well as the streaming of an all-star concert from Osaka, Japan, could be found at jazzday.com.

With that, Professor Herbie Hancock summed up the entire six-set experience, by providing a list of important “ideas to take along on your personal and collective journeys.”

• One, recognize the value of mentors whose goals and leadership serve as models and guides throughout our lives.

• Two, work towards happiness for yourself and others as a contribution to the advancement of humanity in your own unique way.

• Three, never give up on the battle to overcome personal demons that stand in the way of contributing to a more humane and peaceful world.

• Number five is, muster up the courage to examine many sides of an issue including preconceptions that you may have harbored for a long time.

• Number seven, respect all people and realize we need each other.

• Number nine, we don’t have to like everybody, but we should love everybody.

• Number ten, have the courage to change and to change the rules.

• And practice the Ethics of Jazz.