What “Miles [Davis] took it upon himself to do,” said the first African-American to hold the title of Charles Eliot Norton Professor of Poetry at Harvard University, is “what jazz musicians always hope to do. And that is: to make whatever happens work.” This was a foundational lesson, delivered during the first in a series of six lectures on “The Ethics of Jazz” by the Norton professor, who also happens to be one Herbert Jeffrey “Herbie” Hancock, co-president of the International Committee of Artists for Peace. 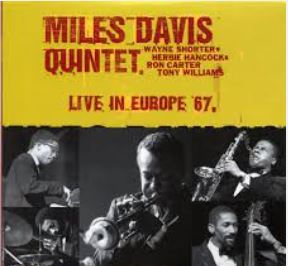 The professor had just capped his lecture with a remarkable story of a 1967 concert in Sweden, in which “magic” was happening all throughout. Then, suddenly, during one of Miles Davis’s most-beloved tunes, “So What?” Mr. Hancock played what he considered a wrong chord! Mr. Davis, in an act of spontaneous artistic compassion, centered himself, took a breath, and then played a musical phrase that transformed the chord from completely wrong to absolutely right.

Over the course of an hour, the Norton professor had enthralled those attending with his perspective on several topics, including creativity, the mechanics of jazz, the wise mentorship of Miles Davis, spiritual lessons from Buddhism, and a demonstration at the piano of how to use artistic constraints as a springboard for innovation. 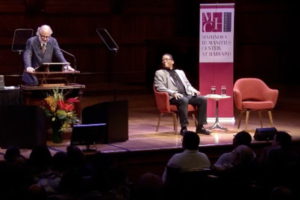 Prior to his lecture, titled “The Wisdom of Miles Davis,” Professor Hancock was introduced by Homi K. Bhabha, director of Harvard’s Mahindra Humanities Center. “It would be no exaggeration,” declared Mr. Bhabha, “to say that Herbie Hancock has defined cultural innovation in each decade of the last half century.”

Professor Hancock then took the podium at Harvard’s venerable Sanders Theatre, where such notables of history as Theodore Roosevelt, Winston Churchill and Dr. Martin Luther King Jr. had previously addressed large crowds. Mr. Hancock began by speaking of the many roles and function he fulfills, explaining: “I’m a musician, but that’s not all. I’m also a spouse, father, teacher, friend, Buddhist, American, world citizen and peace advocate, UNESCO Goodwill Ambassador, the chairman of the Thelonious Monk Institute of Jazz—but what is the single factor that connects all of those aspects of me? It’s the fact that I’m a human being.” 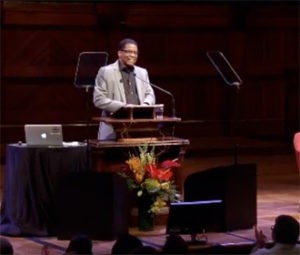 Our common humanity — this had been the constant theme of the evening, which the Norton professor addressed from many angles. For instance, toward developing wisdom and fostering creativity, he expounded upon these three key points:

1) Entertain the idea of being open to possibilities

2) Explore how you perceive yourself.

3) Investigate opportunities that lie outside of your comfort zone.

Of Miles Davis, Mr. Hancock recounted how the late jazz virtuoso was a great leader and mentor, instilling the lessons of courage, conviction, confidence, trust and ethics. And he explicated the broader perspective that “only a great master can provide a path to finding your own true answers.”

Mr. Davis also taught him to “reach up while reaching down; grow while helping others.”

The professor’s humanity was in full display both during the lecture and after, as exemplified when he fielded questions from the audience. Responding to a student who asked, “How do I develop a beautiful touch?” (a reference to Mr. Hancock’s anecdote during the lecture about how Miles Davis had praised him with that epithet, and about how he had learned it from his boyhood piano teacher and early mentor, Mrs. Jordan) Mr. Hancock replied: “Develop your life!”

You can see the lecture in its entirety online at: http://youtu.be/EPFXC3q1tTghttp://www.youtube.com/watch?v=EPFXC3q1tTg