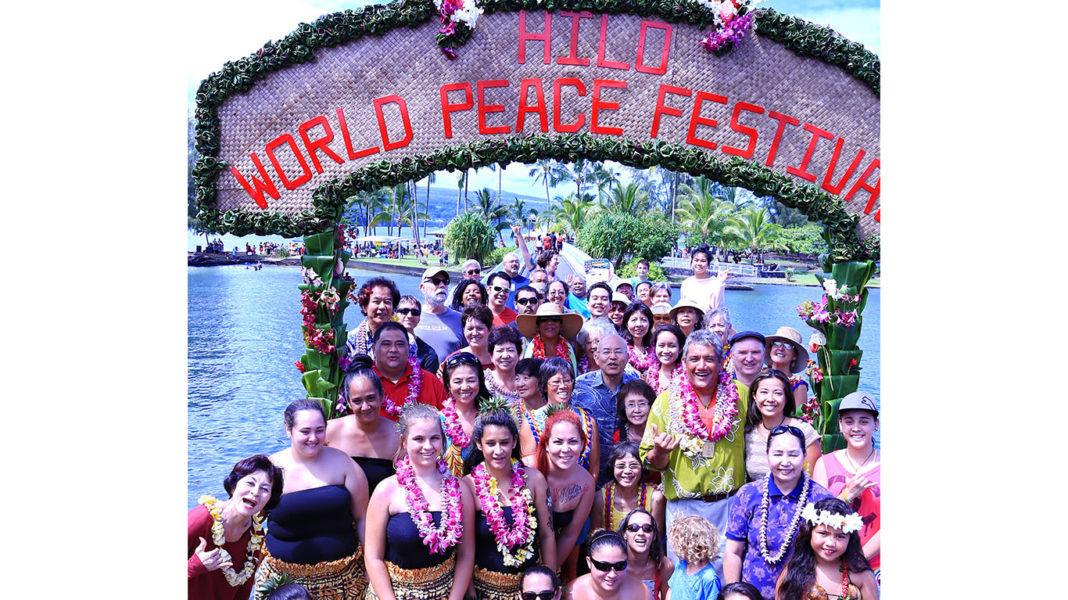 The County of Hawaii mayor’s office, led by Mayor Billy Kenoi, has been exerting all-out efforts to insure that all citizens who reside in the path of the continually erupting Kilauea volcano remain safe. That same reverence for the sanctity of life was on display today, in an uplifting format, as the County of Hawaii presented the fifth annual World Peace Festival on Coconut Island. This small body of land, situated in Hilo Bay off Liliuokalani Park, is also known as Moku Ola (Hawaiian for “Island of Life” or “healing island”). Since ancient times, Moku Ola has served as a safe haven, a place for healing and refuge.

Each year, Festival participants come together to promote the “spirit of Aloha” and “cultural diversity for the creation of a peaceful world” in this grand event resulting from a partnership among the Hawaii County Mayor’s Office, the County Department Parks and Recreation, the Hilo Downtown Improvement Association, the SGI-USA, the International Committee of Artists for Peace, Hawaii Youth Exchange and other business entities and citizens. 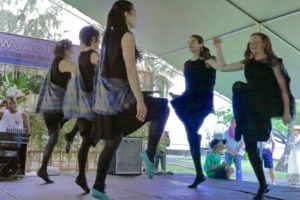 Once again this year, Mayor Billy Kenoi has been the driving force behind the Festival, which he initiated four years earlier after learning about Dr. Daisaku Ikeda’s worldwide travels for peace. Dr. Ikeda’s initial journey began on Oct. 2, 1960, in Hawaii, and today, Oct. 2 is celebrated by many citizens as “World Peace Day.” Accordingly, the mayor has brought to fruition this international cultural event to be held on the first Saturday of each October.

In his official welcome at this year’s Festival, the mayor spoke of the virtues of the event in light of the intensity of daily life on the Big Island of Hawaii: “And now we all have threat of lava, Mother Nature. But it makes you so proud of how the community sticks together, everybody helps each other . . . When times are challenging, we all share from our heart, we all give from our heart.” 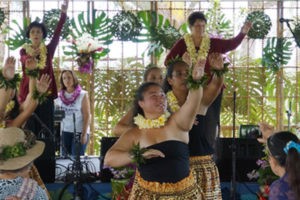 The mayor concluded by expressing his appreciation to all behind-the-scenes support personnel, such as citizens who contributed greatly to beautifying the bridge to the island and venue with an abundance of flowers. He commended those citizens and volunteers for being filled with love and Aloha, and he especially acknowledged Dr. Daisaku Ikeda for providing the inspiration that makes this Festival possible. 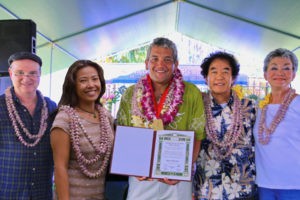 As a highlight of the event, representatives of ICAP bestowed its Humanity in the Arts Peace Award to Mr. Kenoi. The award certificate reads in part: “The community of artists draws its deepest inspiration from those individuals who lead the way toward transcending the differences that divide the human beings, who devote themselves daily to the heightening of a human spirit as exemplified by your ongoing efforts to spread the spirit of Aloha.”

Mayor Kenoi expressed his gratitude for the honor, which he dedicated to his beloved parents. He then introduced his mother-in-law, Kuniko Culhane. The mayor shared that before he started dating his then-schoolmate, Takako Culhane, the young Billy Kenoi visited Mrs. Culhane to ask for her permission. The mayor said that their treasured relationship of mutual respect today originated in how Mrs. Culhane was both very strict and very warm and loving toward him in those early days. 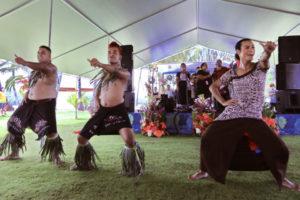 Shelly Takemoto, a local community organizer, said: “I have been fortunate to be involved since the first World Peace Festival. I have seen so many changes, especially in terms of increased citizen awareness and active participation. I am very grateful to participate in behind-the-scenes efforts to ensure the success of the Festival.”

She continued: “The next year being the 55th anniversary of Dr. Ikeda’s travels for peace starting in Hawaii, we are determined to show actual proof of dynamic development in our lives and in our communities.”